Dealing with newer editions of classic role play games brings up all kinds of interesting wrinkles in this post covid age of ours!? Today we dive into two newer role playing incarnations  of both Elric & Hawkmoon. Here's a bit of background on the history behind the newer Elric incarnation of the Elric of Melnibone  from the Elric of Melnibone site;" Mongoose Publishing acquire the Eternal Champion Licence from Chaosium in 2006, and published new versions of both Elric of Melniboné and Hawkmoon. The initial editions of these games utilised the Runequest (itself licensed from Greg Stafford) rule set, while the 2nd edition Elric of Melniboné was built on both the Runequest II and latterly Mongoose’s own Legend game system." 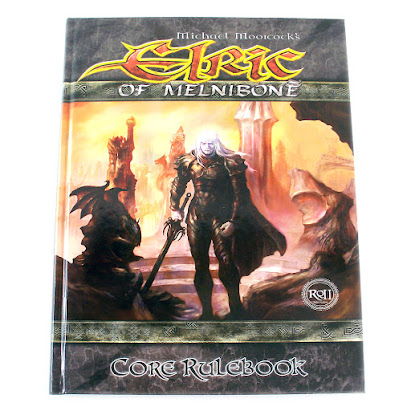 Where do I begin?! If you want something done right then do it yourself. Last night I grabbed my pdfs of the Mongoose Hawkmoon & second edition Elric Rpgs. Why the second edition?! Well according to the Elric of Melnibone rpg website; "Initially written by Lawrence Whitaker and Pete Nash, this short lived 2nd Edition revised the game mechanics to match the Runequest II ruleset, while looked to expand the Young Kingdoms setting to more remote locales."
And this lines up with my original question  what I asked in the Elric/Stormbringer rpg Facebook group.  Don't look for the thread because I deleted it. The questions  were how are the Mongoose Elric & Hawkmoon rpgs?! And do they work well together?! Comments on Christmas puddings & bull shite made it so that I got very frustrated. So taking on the question myself I looked deeply into both role playing games. 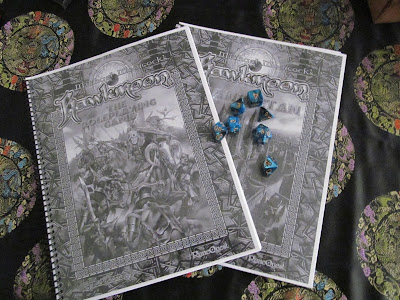 So after reading through the Hawkmoon rpg last night & with a bit of eye shattering strain through the Elric second edition. The conclusion is that these would work very well together for a campaign & there are several reasons for this:
But let's talk about the Hawkmoon rpg for a moment. The setting is far more detailed in its own right & the empire of  the Tragic Millennium, is rife with adventure possiblities. 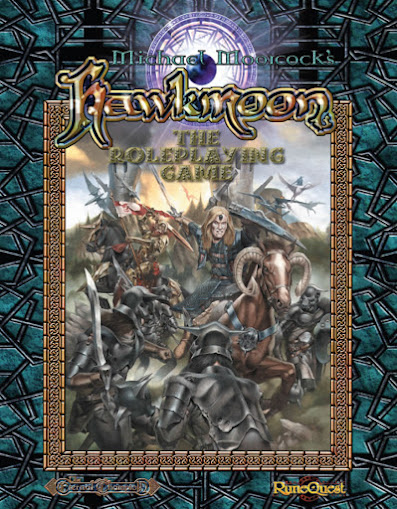 Are the two games worth the price of admission?! Possibly by themselves?! Maybe but not for the fifty dollar plus collector's asking price at the moment. But coupled with Runequest & together?! Certainly and this is because they do the job of presenting their respective worlds very well. These games take on their material & bring it to the table top level in a way that actually suits the gaming that we've got today.
Posted by Needles at 9:30 AM