"Creatures, heroes (or antagonists), and exotic treasures for use by the Game Master in Stormbringer adventures. Plus six far-ranging adventures ready for immediate play" 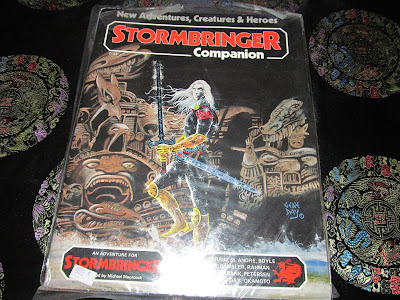 The Stormbringer rpg Companion is one of the most loved of the 2nd edition box set supplement books, The Stormbringer rpg companion  basically is the spill over & adventure book that the game needed.Stormbringer Companion  for the Elric/Stormbringer RPG is a paperback  that was published on January 1, 1983 by Sandy Petersen (Author), Steve Perrin (Author), & Ken St. Andre (Author). Its loved because of the fact that it actually dove tails right into the world of 'The Young Kingdoms' so well. And the adventures actually fit the game very well. These adventures convey a feeling of Sword & Sorcery inherit in the design & writing at the time; ""Stormbringer is a roleplaying game of action and adventure in the Young Kingdoms, the world created by noted author Michael Moorcock in his ELRIC novels. This is the first supplement produced specifically for Stormbringer.Within this book you will find two main sections: Additions and Scenarios. The Additions section contains creatures, heroes (or antagonists), and exotic treasures for use by the Game Master in Stormbringer adventures.The Scenarios section contains six far-ranging adventures ready for immediate play. The adventurers will travel the world over: starting from daunting Forest of Troos, through the Dragon Sea, into the Marshes of Mist, over the northern hills of Shazaar, and onto the Plane of Shadows. They must meet and master every foe imaginable, but the rewards are well-worthwhile for the few lucky survivors." 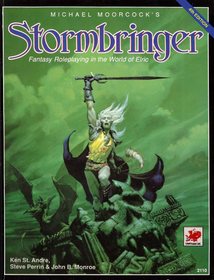 The adventures start with the solo 'Sea Battles At Melibone' By Ken St.Andre & you get to play Elric in a sea battle against his treasonous cousin. The adventure is designed to teach the tactics of the Stormbringer rpg. Its a good introduction to the game itself. The second adventure Karyzoon's Quest by John Scott Clegg takes the player on as a sorcerer of Pan Tang whose exhausted his supply of invulnerability potion & must brave the forrest of Troos. The adventure highlights the real alieness of the forrest & its inhabitants. It does solid job of introducing the forrest & weirdness to the player. I've used this adventure as a part of the mercenary work for my players back in the Nineties. Into The Marshes by Glenn Rahman has the player take on the role of Moonglum.This is a good solo adventure with some interesting twists & turns.
Then we dive into 'The Hall of Risk' by John Boyle, this is a mother of an adventure & really goes a long way to really putting the 'Young Kingdoms''s flavor on a plate for the dungeon master. This is a high risk adventure & I've run it several times over the years.
The Crystal of Daerdaerdath' by Mark L Gambler here the player's PC's become in the employ of a wealthy Pan Tangian merchant, a collector of magical artifacts & art. They have a rather unusual job but the adventure is not as straight forward as it sounds. And this is one of the best of the book in my humble opinion.

'The Eye of the Theocrat' by Ed Gore is a nasty little run of an adventure & this one is a classic that I've run numerous times. Its nasty, dangerous, with its own twists or turns.
The Stormbringer Companion is more then the sum of its parts & many of the adventures above would resurface within fourth edition Stormbringer as a part of the book's packaged adventures. The book is now notable for collectors of the Stormbringer rpg. And an old favorite of mine because it lays the Young Kingdom flavor, setting, & material at the feet of the dungeon master.
Posted by Needles at 12:11 PM