"Stardust the Super Wizard is a name spoken in hushed whispers throughout the universe, He uses his vast knowledge of interplanetary science and sorcery to monitor all inhabited worlds, and when he finds beings he considers exceptionally evil or vile, he dispenses the justice he feels they deserve. Once you've incurred the wrath of the Super Wizard, you are done for!" 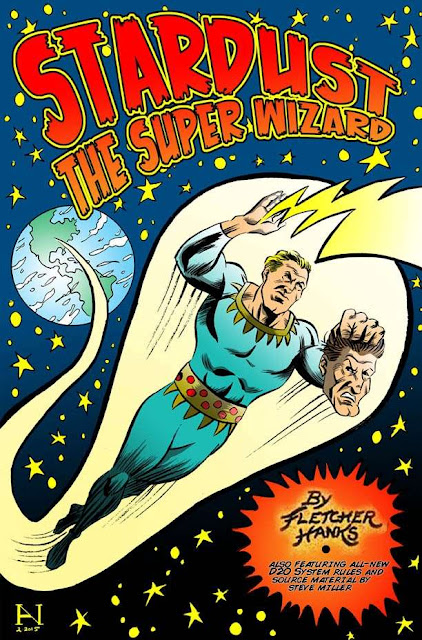 For many now the Nuelow games universe setting has been one that we've been dipping into for many years. A combination of public domain comic book series & supplement the whole book  is more then the combination of its parts. This formula is one that allows Nuelow to flesh out characters such as Stardust The Super Wizard; "Stardust the Super Wizard from NUELOW Games collects six tales from the Golden Age of Comics by one or its most eccentric and erratic creators, Fletcher Hanks. Although he only worked in comics for a brief time during 1939 to 1941, the over-the-top nature of his work left a permanent mark on the emerging artform--and it makes the stories worth reading even today. The "Stardust the Super Wizard" series is where his bizarre story-telling style was most prominently on display. followed closely by run on the "Fantomah" series (highlights from which are featured in NUELOW's The Three Lives of Fantomah: Mystery Woman of the Jungle."
Who is Stardust The Super Wizard? According to the Public Domain Super Hero site; "Stardust the Super Wizard lived on a "private star" far out in space. He patrolled the cosmos fighting criminals, racketeers, spies, and terrorists, but comes to Earth after intercepting a radio signal from America."  And Neulow Games
What really makes Stardust The Super Wizard is the cultclassic comic artwork but who was this renagade comic book artist from the Golden Age of comic books;"Fletcher Hanks, Sr. (December 1, 1889 – January 22, 1976) was a cartoonist from the Golden Age of Comic Books, who wrote and drew stories detailing the adventures of all-powerful, supernatural heroes and their elaborate punishments of transgressors. In addition to his birth name, Hanks worked under a number of pen names, including "Hank Christy," "Charles Netcher," "C. C. Starr," and "Barclay Flagg." Hanks was active in comic books from 1939 to 1941" Here's a great article on the comic book work & fate of Fletcher Hanks. 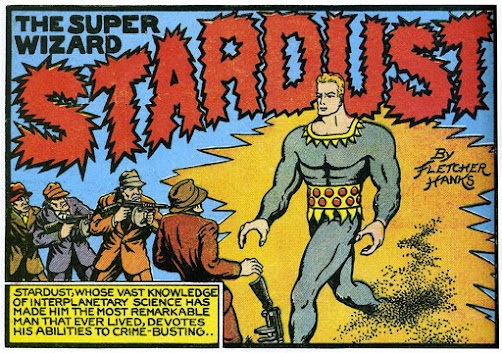 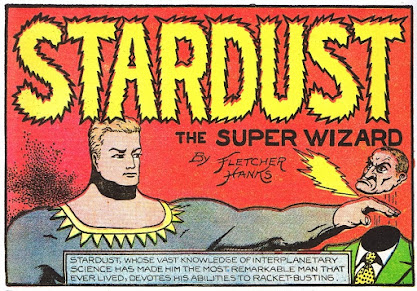