"Demon Magic combines two large adventures with an assortment of new creatures, spells, and magic items. It also includes a version of Chaosium's SANITY rules for use in Stormbringer." 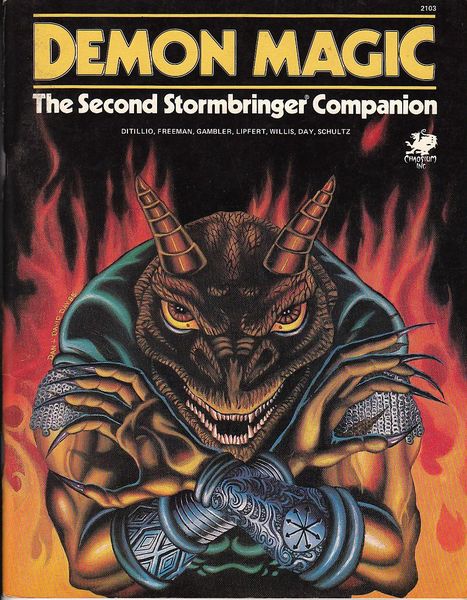 Authorized by fantasy author Michael Moorcock, DEMON MAGIC includes all necessary statistics, maps, and plans, and contains many original illustrations. Among its contents are:

Six new creatures, six nationalities, seven new Demon abilities, and five new magic items." Let's start with the 'Sanity Rules' by Mark L Gambler, these rules add an other level of weirdness & regret to the over the top sanity shattering occult & demon summoning in the 'Young Kingdoms'. They do this by porting over & improving upon the Call of Chluhu rpg. These sanity rules are down & dirty as well as fun. We dip our toes into 'New Demon Special Abilities' article by Arno Lipfert which comes to be very handy in the Stormbringer 2nd editon box set era.
This leads into the Scorcerers Isle adventure by Kevin Freeman;"This scenario is set after the sack of Imnyr, when the Young Kingdoms were rife with pirates and adventurers. Gamemasters may place this adventure earlier merely by changing the Sadric number. " The adventure gives the Sword & Sorcery  look & feel of a Melibone in turmoil. Rumors of Rathless by Arno Lipfert  takes the usual Young Kingdom dark sorcery  vibe & turns it up to eleven. The dungeon master is going to have to work a bit to adapt the occult strangeness.
But its a good middle of the road Sword & Sorcery dark magic fluff piece  with some interesting twists & turns. Arno Lipfert then switches gears with some very nasty & dangerous dark magical relics in the 'Magic Items' article. The creatures section does a decent job of presenting an over arching set of presenting monsters, alternative races, & chaos mutations. 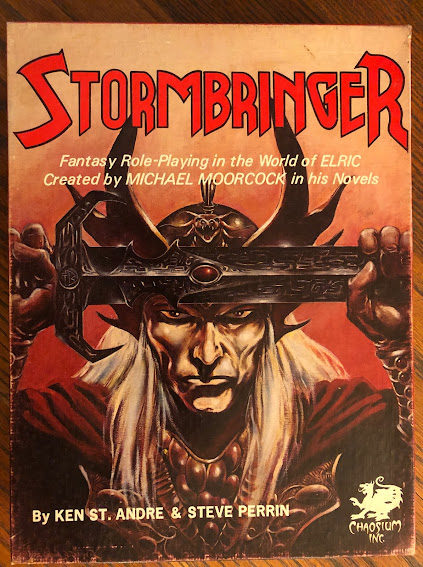 'The Velvet Circle'  by Larry DiTillio adventure seems like a simple adventure & is often described on the back of Demon Magic as follows;
"The Velvet Circle: a scenario in seven chapters, which takes many sessions of play to conclude. The adventure includes a complete red-light district, with business notes and a plan of the Circle."
You often adventures described as 'mini campaigns' or micro campaigns by OSR writers or designers. Well there's nothing mini about the 'Velvet Circle'! This is a full on Stormbringer campaign set of adventures & the dungeon master is going to have to cope with it. This whole kit set of adventures could take a year or more to deal with.

The Velvet Circle feels like an old school campaign done right with the over arching blend of Stormbringer weirdness & BRP system style thrown into a blender of Sword & Sorcery adventure. 'Demon Magic' has a unique fill compared with even other Dungeons & Dragons supplements of the day. It was a distinct, unique blend of Moorcockian style elements with a put on of the Young Kingdoms. The supplement with it Chaos demon on the front always felt like a forbidden tome of the era.
'Demon Magic' has the life & breath of the Stormbringer second edtion box set era about it & tackles the material of the Moorcock game on  its own terms. Many of the elements, rules, creatures, etc. would find their way into other Stormbringer product but 'Demon Magic' was unique for its time.