Review & Commentary On "Black Sword: Pursuit of the White Wolf" By Ken Rolston For the Stormbringer rpg

"The scenarios depict a woman's quest for revenge against Elric himself. Elric was hired by three merchants of Bakshaan (rivals of the woman's father, a man named Haver Nikorn) to storm the Nikorn keep and kill her father. That battle is chronicled in the Moorcock story entitled "Stealer of Souls". And so this review picks up straight from "Stealer of Souls: A Quest For Vengeance in Ilmiora " By Ken Rolston For Stormbringer rpg 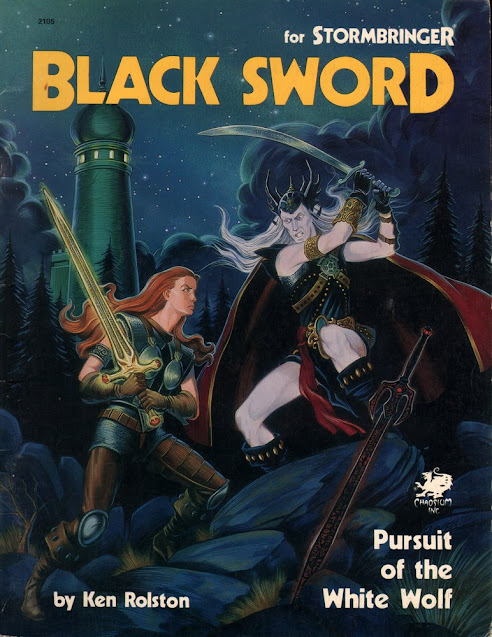 "Freyda Nikorn, the dead merchant's daughter gathers together a group of adventurers and friends to embark on her mission of vengeance. The adventures in this book tell the tale of Freyda's quest for vengeance against Elric and of Freyda's final battle with the White Wolf. Her success or failure is determined by the players.

Freyda's quest takes her across the land of llmiora to observe the breadth of the destruction which always follows in Elric's wake. Elric's adventures during this period are chronicled in the book 'The Bane of the Black Sword'.

The gamemaster is provided with extensive information on the governments, cultures, and environments of the various lands which Freyda must visit while following Elric's trail, including Nadsokor, Org, and Karlaak of the Jade Towers. Non-player-character descriptions aid the gamemaster in storytelling."

appeared in '85 & involves the PC's emeshing themselves even further into the pursue of vengence. The adventure path here feels fully operatic & epic drawing down the PC's into a web of blood shed & spiraling weirdness within the Young Kingdoms. Freyda is only one or two steps behind Elric as we get a guided tour of his path throug Nadsokor, Org, and onto Karlaak of the Jade Towers. The PC's are going to have their hands full dealing with the repercussions of Elric blazing path through the Young Kingdoms.

Remember "Black Sword: Pursuit of the White Wolf" By Ken Rolston  picks straight up from the previous module & exploits things & events  from Moorcock's 'Stealer of Souls'. This module picks up with;" Elric’s adventures during this period are chronicled in the book “The Bane of the Black Sword”." 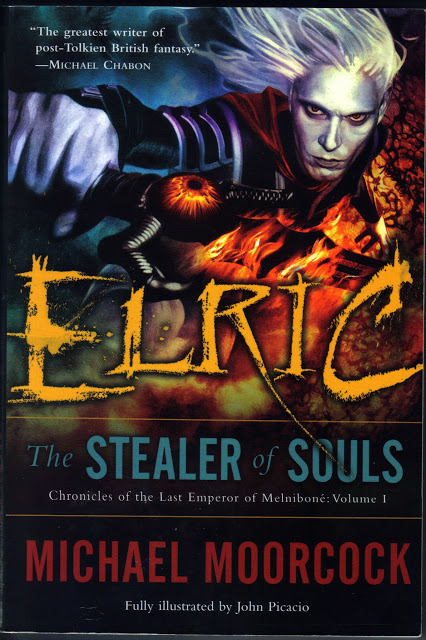 Freyda Nikorn, the dead merchant's daughter is damaged goods. And if we're using the sanity rules from The Stormbringer Companions I & II then its easy to see how & why this whole ordeal is going to wreck her world. The player character's PC's are going to need to react to this. And the DM needs to keep this factor in mind as events & encounters happen frequently. 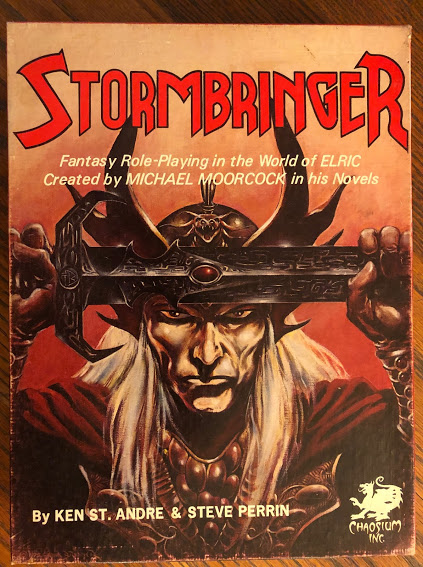