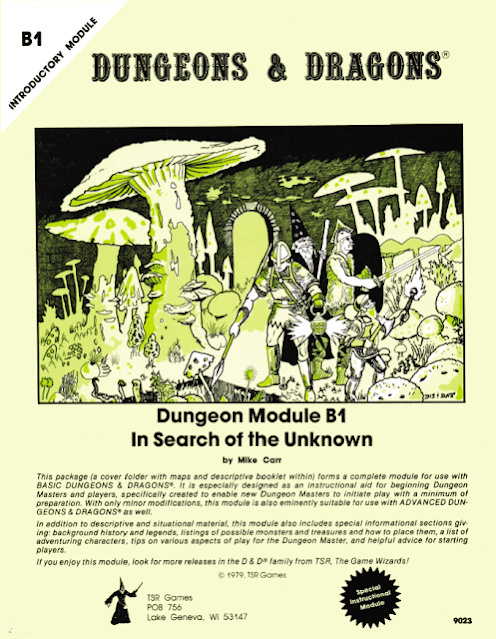 The last of the skeletons were dispatched by the PC's & things were heating up fast in B1 folks. The skeletons were pretty mouthy to the player's PC's & they taunted the party even as they were getting mashed. A lot of Zombierama rules from

The OSR Library here in other words those weren't ordinary skeletons.

<
So being bound & determined to spend Christmas with my family didn't go as planned!?! Today I got dragged unto the gaming table again!?!  Never let it be said that the players ever let us dungeon masters rest on our laurels. We picked right up from last session with the player's PC's coming face to face with another old foe.
After dealing with the orcs & several minor goblin snipers the player's party made it into a hallway where several strange bio mechanical alien mercenaries were having slave dealings with B1's humanoids. The aliens were buying a local young lass that had been captured for nefarious purposes.
The PC's hung back & went to identify the aliens & came straight up with a successful roll of Heretick werks blog's  Tcho-Tchoids. I believe there was a 'Oh Hell no!' from one of the players & the PC's flanked the aliens & the pig faced orcs!
There was a Frazetta artwork  moment when one of the thieves rolled a 'one' on their check! 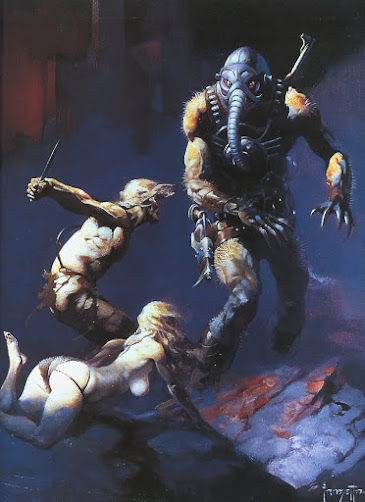 There is a long standing hatred of  the Tcho-Tchoids & the players as Papa has employed them as mercs since their first encounter in 2012. The alien mercs unleashed Hell on the party with grenades, and several fire ball spells. The PC's yanked the slave away from the orcs who went down under knives, bullets, & two natural 'twenties'. The Tcho-Tchoids disappeared in a whisper of psychic powers & retreated to the shadows. The party of six is bidding its time after a morale check once two of their number went down..
Turns out the girl is actually a 2nd level fighter and replacement for one of the player's PC's who died last game. The rest of the player's PC's equiped her fast with crow armor salvaged from the orcs, several knives, a short sword, and a goblin bow with arrows. Countess Tara wasn't in any position to be picky folks. She also managed to kill off a goblin warrior about to pick off the party's thief.
Now its deeper & deeper into B1's inner works & the players absolutely think they know where this is heading. Not realizing that the DM is using  the B1 Insearch of the Unknown Sourcebook available here from the Zenopus archives site.  Papa will have his due folks its gonna get worse from here. Much worse...
Posted by Needles at 10:00 AM

Email ThisBlogThis!Share to TwitterShare to FacebookShare to Pinterest
Labels: B1 In Search of the Unknown, B1 Insearch of the Uknown Sourcebook, Mega City One, Play Session Report, Swords & Wizardry, THe OSR Library, The Zenopus Archive