Robert Chambers was fifty years old & he had tracked 'them' to this house in the middle of New York state nowhere squared.. He hefted the .30 - 06 rifle to his shoulder his eye squinting through the star light  scope. The snow quietly crunched under his boots as the moon turned everything blue white around him. Snot dripped into the snow from his nose off of his boots. He'd tracked them through two states  off of the tips of state troopers, insurance investigators, & the ghosts. It was always the ghosts & the nightmares that plagued Robert's dreams. The abandoned house had kept 'their' M.O. 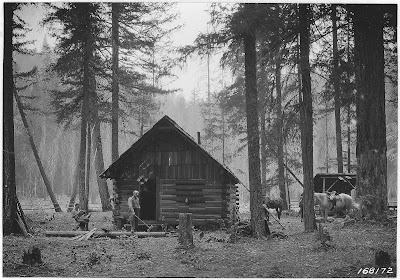 Violence always followed in their wake & at first it was the reports of missing persons that grabbed his attention. And then it was the report of a local serial killer that slammed home it was 'them' on the move again! He encountered them out by his uncle's hunting cabin in November of Seventy Seven & there were three of 'them'. At first it was the smell that hit him between the nostrils & then Robert's surroundings became weird. The air was off & everything seemed to slow down as if time was unwinding around him. The colours didn't look right & that's when he saw them.. They were humanoid but covered in hair there was something vaguely canine about their muzzles but the claws were wicked. They carried a human child between them but it wasn't turned the right way anymore. He couldn't no he wouldn't concentrate on that because it was those blue green eyes that struck him. They pierced his soul & couldn't let go. There was something vaguely reptilian about them & 'other'. Why they had let him live he didn't know. But the smell lingered in the air for hours. It was a mix of dead decaying bodies, & a scent that he'd smelled in some of the zoo's that he'd worked in as a kid in South central Florida.
It was that smell that brought him back to the present & the abandoned house. He had found the first kid a boy William T. Howard in abandoned farm house on the Canadian/United States border. They'd left a bundle of twigs, some weird leather, & a stone carved with strange symbols. There were fifteen Spanish  gold coins with the package of the carved stone. The boy was catatonic but otherwise unharmed. They'd taken Will Howard from Bangor Maine fifteen days ago. They had human helpers who smuggled the various people they'd taken  with impunity. Will was returned to his parents & Robert had gained his reputation as a finder of lost children. Some were not so lucky.
Robert crossed the distance to the house in the snow the rifle's weight swinging in his hands. And that's when the flash of light engulfed everything! The white light was everywhere & everything, the breeze was warm around him but the smell of Lilacs & decayed flesh washed over Robert entirely. Despite everything Robert kept stumbling through the snow to reach the rotting wood of the house. As he did there was guttural almost human like laugh & one of the things waited for him. He couldn't clear the tears from his eyes fast enough to get a clear look down the rifle to get a shot. Robert only caught sight of those eyes for a second before the thing cleared the strange doorway in space. And then it was gone except for the crying. The adult man naked on the ground was crying & screaming it was the same as always. But it was the strange evil thing sitting on the make shift altar made of wire & sticks  that grabbed Robert's attention. It was the most evil thing that Robert had ever seen in his life. A blade made from volcanic glass that glowed with an ominously evil light. There was an aura around the object an  absence of light coming off the blade tearing at the reality around the altar. It was a thing from Hell & Robert caught himself reaching for it unconsciously.

It was the man's screaming that brought Robert back to the present.  He grabbed the space blanket in his pocket to cover the man. The man's mind shut down & he fell hard on Robert's shoulder. But his mind was on the knife artifact on that altar. Robert made the long hard track back to the car.

The ornamental blade +2 cursed blade  able to store 2 spells within. The ornamental blade is a vampiric blade able to  heal a number of hit points equal to half the base damage dealt by an opponent on each attack. The obsidian blade also shares a connection to its makers with a send dream spell woven into its construction.