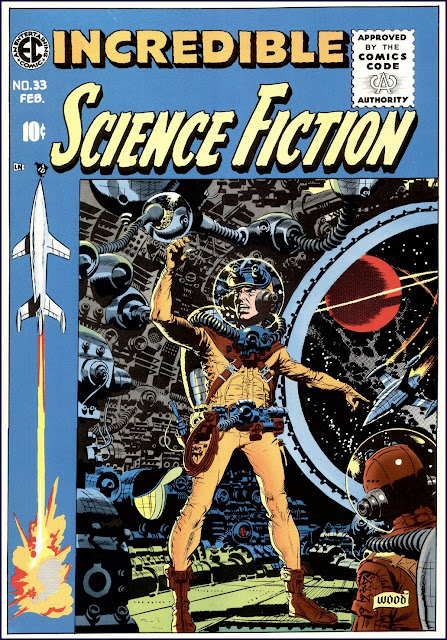 
Aside from the title change, Incredible Science Fiction was also different from its predecessor because it now had to follow the tight standards of the Comics Code, which was created in 1954 to censor the controversial comics of that time. Eventually the Comics Code would spell the end of not only this comic, but all comics produced by EC. When a story in issue 33 did not meet the standards of the Code, publisher Bill Gaines and editor Al Feldstein decided to reprint the story "Judgment Day!" (originally in Weird Fantasy #18). A powerful anti-racism story, "Judgment Day!" was also rejected because Judge Charles Murphy, the Comics Code Administrator, demanded that the black astronaut be removed. Gaines refused and threatened to take the matter to the Supreme Court. The Comics Code backed down, and Gaines then printed the story without any changes.[2] But Gaines had seen the writing on the wall, and he left the comic book industry soon after. Incredible Science Fiction #33 was the last comic book he would publish.

This was a land mark issue featuring some of the straight up talents of such greats such as Wally Wood and many more this issue also had some ground breaking science fiction echoing the times, done in the classic EC style. The Big Moment is at once a post apocalyptic story, lost world, and sc fi adventure all wrapped together and its a perfect jump off point for a time travel adventure. There are some very deep roots here to pull a party of adventurers into the deep end of the sc fi pond.
Kaliscope is just the sort of adventure where an old man's imagination might provide some vital clues for a party to perhaps not his dreams and flights of fancy but memories of times long past which might be molded into a vital part of an adventure. Classic artwork makes this story a perfect blend of science fiction comic and classic fifties themes.
'One Way Hero' gives a possible origin for an NPC whose suffered the effects of classic 'space madness' and washed out. This tale has bits of old EC horror in the background buts punch is a bit bitter.
Small World is a classic EC one pager, a small side line story with the bits and pieces of the EC twist to it.
An Eye For An Eye is a classic post apocalyptic wasteland tale with classic EC sci fi artwork and the twists that make EC such a great company. This tale can easily be used as a jump off point for a Mutant Future or even a Metamorphosis Alpha 1st edition jump off point. It has all of the classic EC earmarks and can easily be used for a touch stone for a number of old school adventures points.
Some really solid background is available right over HERE
Posted by Needles at 10:07 PM