Free Old School Warren Comic Magazine 'The Rook' Issue One And David Bay Miller's " Pay for your coffins....Django and Sartana are coming!" (OSR in the American West.) Rpg System 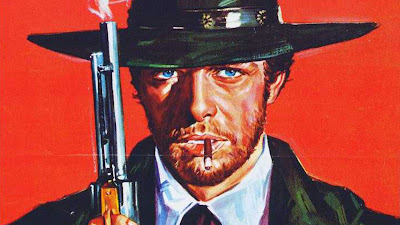 David Bay Miller is trying to break me, he's released his popular " Pay for your coffins....Django and Sartana are coming!" (OSR in the American West.)" rpg system and claiming that this is all my fault ;-) Well you can grab it right over HERE
And tonight he's release the unusual weapons tables and such right over HERE
But I'm one step ahead of him with a perfect time traveling campaign setting from one of the coolest of the Warrren titles from the 70's with a free download from Warren with the very first issue of the Rook. One of my all time favorites from the pages of Warren publishing!

I know your wondering whose the 'Rook' and what does this have to do with the 'Old West'? Well the Rook was one of the very best of Warren comic magazine's self published heroes and more often then not his time traveling adventures roatated around Warren's alternative historical universe.

According to Wiki:
The Rook is a fictional, time-traveling comic book character whose adventures were chronicled in 1970s issues ofWarren Publishing's Eerie magazine and then in his own 1980s title, The Rook Magazine. He was created by writer-artist Bill DuBay in Eerie #82 (cover-date March 1977).


he Rook debuted in Warren Publishing's black-and-white horror/science-fiction comics magazine Eerie #82 (March 1977). Created by writer-artist Bill DuBay,[1] who drew the character's cover illustration, the Rook debuted in the 20-page story "The Man Whom Time Forgot!" by writer Dubay and artist Luis Bermejo. He was featured in nearly every issue of the otherwise anthological title, through Eerie #105 (Oct. 1979), missing issues #86 and 96-97. His stories ranged from 11 to 31 pages in length.[2]

The character was then spun off into his own comics-magazine series, titled The Rook on its trademarked cover logo and The Rook Magazine in its indicia copyright notice. This ran 14 issues (Oct. 1979 - April 1982), and also included, in various issues, the ongoing backup features by Dubay (either under his own name or his pseudonymWill Richardson) and others, including "Voltar",[3] writer-artist Alex Toth's "Jesse Bravo", writer-artist Jose Ortiz's "Viking Prince",[4] "Kronos", "The Goblin" and writer Jim Stenstrum and artist Abel Laxamana's "Joe Guy, America's Foremost Hero!". A handful of one-time features also appeared, such as "Buck Blaster and the Starbusters", "Bolt", and writer Don McGregor's "Dagger"[5]
Following his solo title's cancellation, the Rook appeared in eight- to 13-page stories in Eerie #132, 134 and 136 (July, Sept., Nov. 1982). He had also guest-starred in the Vampirella story "Ghostly Granny Earloose" in Vampirella#70 (July 1978); Vampirella and Pantha likewise guested in the Rook story "Warriors from the Stars" in Eerie #95 (Sept. 1978). The first four Rook stories were reprinted in Warren Comics Presents #2 (May 1979).[2]
The Rook travels throughout space and time, and over  the course of his adventures in time and space he's encountered a ton of heroes, doing cross overs with every major figure in the Warren line and sometimes beyond. Its not out of the realm of possibility that he might run into your adventurers as an NPC. But that's not all.

The Rook is scientist Restin Dane, who comes from a family of scientists whose members include the unnamed protagonist of the novel The Time Machine by H.G. Wells. Dane gains his nickname from the fact that his time machine resembles a giant chess rook. Taking to wearing Western-style clothing and a gunbelt, he has his first time-travel adventure at the Alamo in order to save an ancestor. There he succeeds in rescuing his great-great-grandfather Bishop Dane, who accompanies him on many of his adventures, along with two robots Restin has built.
In a later adventure, he meets the time traveler from Wells' book, who is revealed to be his grandfather Adam Dane, and helps him in a war between the Eloi and theMorlocks.[6]
In the initial stories (Eerie # 82-85), Restin appears to be romantically involved with January Boone, while Bishop Dane is involved with Katie McCall. Later stories establish that Restin and Katie have a relationship.
Many of the Dane's adventures are rough,ready, and completely cinematic and are a perfect meld for David's Wild West material. The Dane family left a whole bunch of their time castles scattered throughout time and space. They could end up anyplace and anywhere, including post apocalyptic wastelands, the wild west, the far future, and beyond. But we really don't know what the end game is for Restin and Co. I've used him in the past as a time traveling patron for adventurers. A time traveling NPC invesigator, hero, and plain pain in the rear for my adventurers a couple of times.
Because of the very nature of the character he's a really nice fit for an old west style game and his comic book exploits were some of my all time favorites from Warren.

This post is in no way an attempt to violate the copyright or trade mark of the 'Rook' or the characters of his creation. This blog entry is for educational and entertainment purposes only.
Posted by Needles at 11:17 PM