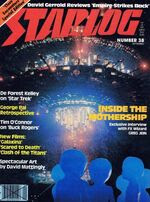 Star Log magazine has always had a classic run of old school science fiction goodness but the September 1980 issue is a really interesting slice into the sci fi consciouness at the time. Its a really neat look into some solidly time twisting goodness of the scene back then and a real walk down memory lane.
Grab It Right
HERE
This really was a critical time in science fiction from the Communication section which advertises the first indications of a new television show about interstellar science called Cosmos to a brand new cartoon called Thundarr The Barbarian that will be appearing on Saturday mornings. Quick section on the Tom Baker era Doctor Who Companion K-9 to a jump over to Log Entries. This section charts everything from the major break ups at Marvel to hand crafted bits of Middle Earth collectibles.
The top story is the special release of Close Encounters of the Third Kind. Rumblings covers the Empire Strikes Out, an interesting look into some of the goings on with Empire at this time.

For me one of the articles that really stands out is the De Forrest Kelly interview, A Candid Conversation With A Country Doctor. Sweet mother of God, this is a real walk down memory lane. Kelly is open,honest, and very interesting about Star Trek and his role in it the whole experience of it.
And here's one of the real gems for the Space 1999 rpg DM, the Space 1999 Writer's Guide Part I. This is a nice and candid look into the process of dealing with the show and how it ticks. Essential stuff for someone wanting to run an adventure.
Scared To Death is a look into the world of practical special effects with Bill Malone and Bob Short. Well worth a read into the 1980 walk through of two of the craft's practitioners. Fascinating look into the behind the camera bits and pieces.
And then we start kicking it into high gear for the Buck Rogers In The Twenty Fifth Century DM, with an interview with Tim O'Connor himself. Some great stuff right in there.
Then we get into a Buck Rogers Episode Guide which is really handy and one of the only sources of television episodes way back in the dark days of sci fi before anything like the internet. But its great for dealing with turning episodes into old school sci fi adventures .
There's a quick preview of the cult classic Galaxina and it still is a weirdo of a film even after all of these years.
We get into Part II of a Behind The Scenes section on the Buck Rogers television show episode Flight Of The War Witch. Some good bits and pieces to use in there for designing out some old school sci fi goodness.
Great George Pal retrospective as well in this issue and some solid stuff concerning him and his career. Personally I think he got the shaft more then a few times throughout his career but its an interesting read through.
And a really interesting preview of a then up coming now classic Ray Harryhausen film 'Clash of The Titans'.
And rounding out this issue is a really cool article on Disney's new Matte painter, illustrator and artist David Mattingly. I swear there wasn't a piece of this man's artwork I didn't see someplace in 1980's sci fi.
There's a really nice selection of it in this issue and I remember seeing it before playing Gamma World 1st edition.

There's a nice article on the sci fi convention scene, a nice read through on sc fi movie scores and more . All in all this isn't a bad issue of Star Log but it really defines the changing guard of the sci fi scene back in 1980.
Posted by Needles at 11:01 PM