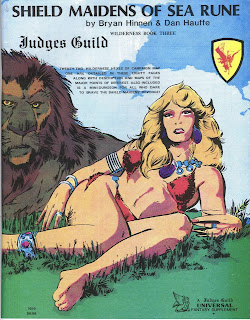 Since the Winter isn't really letting me get together with either of my regular groups of players at the moment I'm quietly been thinking about the later half of the early 2000's when War and Pieces in West Hartford, Connecticut was still in operation.
This hobby shop sold mostly models, classic board games, modeling material, and a wide variety of board games. It was a pretty happening store back in those days. I frequented any number of comic and hobby shops back then across the state. Connecticut has always had a weird vibe when it came to gaming. There were quite a few mom and pop smaller hobby shops but those mostly carried the D20 glut titles or the  White Wolf lines along with a boat load of Magic, new school 40K, and a ton of Pokemon stuff.
To get to the real table top rpg  games, a dungeon master had to travel or do the two cons that were around then. My choice was to travel to West Hartford and get in a game at War and Pieces or Dragon's lair that was down the road. This was a process that started way back in the 90's and continued through the early 2000's regardless of circumstances.
There were several back room campaigns that were going on with OD&D and AD&D 1st edition. There were several reasons for this. One the AD&D 1st edition  & 2nd edition books were dirt cheap back then (well they still are). Second everyone knew the rules and there was an extensive thriving minis market that went hand in hand with the war games that were being played back then. Mutant Chronicles, 40K, and some real table top war games, such as Dirt Side rules, Car Wars, and much more.
I also learned of several campaigns in the Northwest Hills that used AD&D and OD&D rules going back to the Seventies several of which I think might be still on going. These are the games where I really cut my teeth in the hobby and were responsible to my trips to GenCon and other cons. Some of this goes back to the 90's.
No this is towards the early 2000's and the end of an era for my part of the table top hobby.
Hobby shops  and comic shops in the area were closing left,right, and center. The internet had started to put pressure on the hobby and the little operations were closing fast. I got some pretty good deals but to tell the truth, I would have walked away from any of it if only the hobby locally had remained more robust.

One of the middle period titles that springs to mind from Judge's Guild is Shield Maidens of Sea Rune. This was one of the titles that came my way because of a trade. And it was one of the only old school  modules up to this time that featured an Anti paladin. That nasty piece of business NPC class  from the Best Of Dragon Magazine series.
Shield Maidens of Sea Rune had a plot straight out of the early days of the hobby.
Shield Maidens of Sea Rune By Bryan Hinnem & Dan Hauffe
The third book in the "Wilderness Series". 22 wilderness hexes of Campaign Map 1 are detailed in these 80-pages along with description and maps of the major points of interest. Warrior Women plot to regain their home lost to the barbarous Skandiks, fearsome sea reavers all. Torn between their Gods of the North and the Druidic worship of nature, the Skandiks grow weak. Beware the cruel and evil Anti-Paladin who stalks this area looking for blood; he may be the death of you yet! Can you thread the perilous path to fame and riches in this saga of unforgettble Adventure? A Judges Guild Universal Fantasy Supplement. 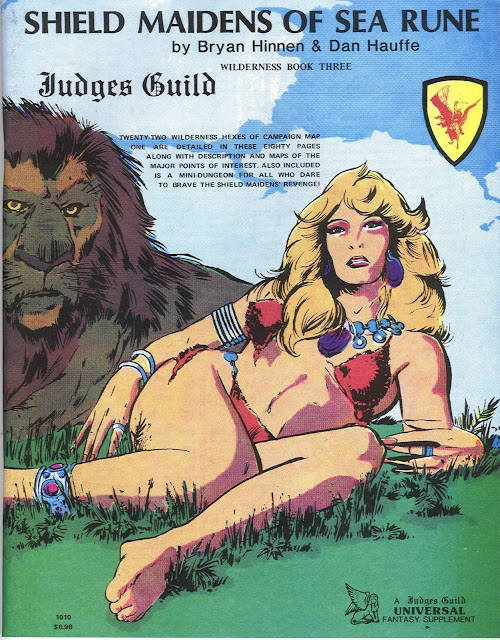 Shield Maidens has many of the themes and things I love about JG products. Comic book style artwork, well done maps and very detailed encounter descriptions. There are also present some of the little details that make the Judge's Guild product lines interesting. Issues with the gods, elements of science fantasy, weird monsters, and a universal system that makes adapting JG's adventures a snap at least for me.
Was there more to that universal system that allowed a DM to convert these adventures over to your favorite edition? Yeah, I actually think so and so does the gentleman who runs the Hill Cantons blog HERE  and he did a full spectrum going over of the system HERE.
The fact is that there's a tradition of old school balls to the walls D&D goodness that includes Delos,Bloody,Bloody, Arduin, Blackmoor, and other settings that go back to the roots of the hobby. A friend of mine gave me quite the education about all of this way back then. He also gave me a copy of the City State of The Invinible Overlord book. This is the Revised City State of the Invincible Overlord (1981–1983, three printings), 96-page book. This has since gone missing in various moves and such.
See Shield Maidens of Sea Rune has everything I was looking for in a real super module. This module had clear links to the City State Of The Invincible Overlord more info on that HERE
The background details set this adventure clearly in the back yard of Calandia [City-State of the Invincible Overlord and Wilderlands]  as needed by the DM . The sci fi aspects of the Judge's Guild adventures are built right into the history of this adventure. The  Semi-Celtic and semi-Nordic cultural aspects of the various factions are present as well. I love the pulptastic aspects of the module from the lurid cover art to the build up of the factions in Shield maidens and I was going to need all of them.
Now believe it or not there was an AD&D game second edition campaign that was happening and it was falling apart big time and it fell right into my lap. The DM was one of those DM's  who likes to get into every single little written detail of play which includes things like statting up the menu of his Forgotten Realms campaign for  adventures. But he forgot to let his players play the adventure that he had written. I inherited the campaign after things fell apart. Needless to say that I let the players keep their PC's and simply moved them over to the City State of The Invincible Overlord via the gates of Tosh.
Posted by Needles at 11:38 PM