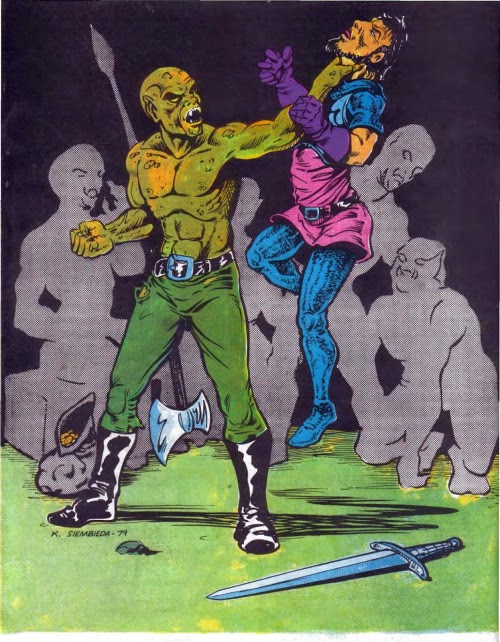 In nineteen eighty one or eighty two I learned the hard way about LGBT issues when one of my soon to be best friends lay on a street corner in my home town with his lights punched in. His face was bloody and I found him after the fact of the beating.
Rick was the kid's name and I brought him home, we only lived a couple of streets away. We (my family) took him up the emergency room and called his folks.
He's about twelve at the time and being what was called a latch key kids we had a ton in common. This led me to the reintroduction of D&D and AD&D in the 80's.
Becoming best friends was pretty much a given because I was going to St.Peter's school and he Vogal Wetmore which at the time was actually two grammar schools. And it was a time of very painful lessons.
This all led to us walking home after school protecting each other in a gauntlet of 'Lord of The Flies' style dodges of avoiding bullies and bloody noses. Its amazing what happens when two friends, hook up and begin watching each other's backs.
Words like 'faggot', and the usual variety of children's vulgarities left its mark on both of us. The pecking order of bullying and fighting gave me a very clear survival instinct for family and friends.
Busted ribs and stitches were not on the menu for us anymore. Each day we would walk past Laraia's smoke shop which at the time was on the corner of the main downtown street.
So one day we're zipping down one day and there was a Judge's Guild module for 2.00 or 3.00 dollars.Maybe even a dollar. 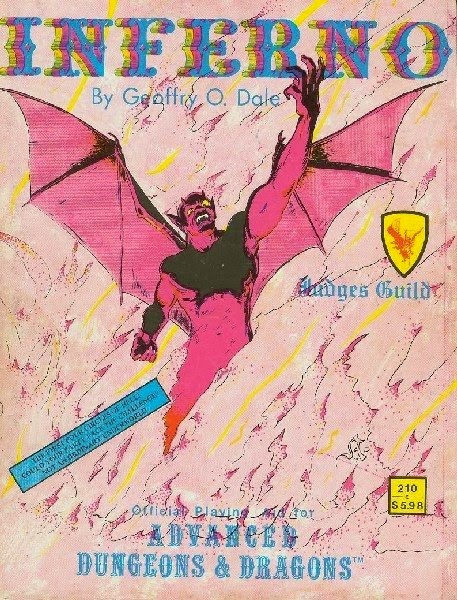 Just look at that cover! What kid was going to pass this up!Laraia's smoke shop  carried at the time a variety of board games, war games, and D&D products including AD&D first edition. But they weren't the only place in town there was a full service book shop downtown but the name escapes me and for years they also carried AD&D and Runequest titles but never JG material. They were far more, well upscale might be the wrong word but that's what it felt like at the time.

A bit about Torrtington might be in order.
I grew up in a former blue collar manufacturing town whose glory by then was and has faded fast. Bled dry by a numerous economic and political climate issues that have never been resolved despite years and years of broken promises.
It's still a town that needs help badly.  You know the type folks these days.
And this all comes down to a flash forward, ten or fifteen years later, I'm burying my best friend and brother in a hole in the ground surrounded by our friends,family, and his other half. A.I.D.s is full swing still cutting through swaths of Litchfield's Hills LGBT community with no end in sight. It was really the first time I had to mourn a friend (but not the last), and hell to this day I'm still mourning. And before you ask, we were brothers never an item.
And we all deal with sadness in our own way. I was going to a 'Christian' high school at the time and then on to college later. But what  I  really wanted was out of the North West Hills of Connecticut.

And I got my chance in spades when I got to go on a high school  'missionary' conference to London. Pass port, bags packed, and one flight later  I'm in London town for the first time. And we've got a 'Christian' tour of the U.K. Sweet Jesus what a joke this was, I and the other students ditched the conference and tour every chance we got and headed off into the English countryside. For them it was the pubs but for me it was the hobby shops and the back alley independent comic shops.
Places like the Traveling Man in New Castle, and any number of back town and village  comic shops and highers. Independent places that are no longer in the U.K. and its here that I made some of my most valuable contacts in gaming. Other obsessive/compulsive types who school me in  the myth,magic, and majesty of OD&D and the Runequest rpg. And the first time I heard the whole of OD&D's tradition and real use with Judge's Guild products. I also got to know White Dwarf magazine and its ties with the grand old game.
In a quiet little back room of a comic book and magick shop in a sleepy village. I met two dungeon mistresses (witches) who brought out a copy of Judge's Guild's Inferno. And here's where things get really interesting. You see Inferno is strongly connected with the West Coast tradition of D&D and Bloody,Bloody ,Arduin. It follows Dante as much as Disney follows the tradition fairy tales they supposedly  animate.
In Bloody, Bloody, Arduin tradition there are twenty one planes of blackest Hells. These range from dead planets with incredibly deadly atmospheres to worlds filled with nuked out cities. You can find more about the demons of Arduin right over HERE 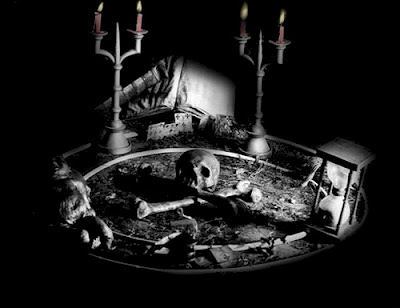 You see Judge's Guild material didn't simply use cheesy artwork because it was cheap(because it was) but because it emulates another American tradition that the creators of these games also were influenced by. American sci fi comic books from the 30's thru 70's.

I've seen a ton of arguments and counter arguments about the use of Christian and religious this & that. It never came up when I played this module with these two wonderful ladies. Because the game I sat in on was about the recovery of the soul of a PC who had vital information that the party needed from Hell's of Inferno.
There were seven high level AD&D PC's in that game and they had a very difficult time. You see that module was intended as a wilderness crawl that was influenced more by issues of 60's and 70's  Dr. Strange then by Dante. But I can hear the howls for blood already from the wilderness from over my shoulders. But why not use that infamous series of articles by Ed Greenwood and Robert E. Moore from Dragon magazine #75 and on? Oh I sure do love those articles, in fact to this day I keep a spare couple of Dragons with them under plastic. But those wonderful articles also present an issue. Those wonderful articles that lay bare the entire cosmology of the Hells for everyone to read about and takes away a dozen shades of mystery from the palette of the DM. Those are articles that every player of the game can recite chapter and verse from to this very day. The ones that served as a bridge gap into the Monster Manual II?
I loved them as much as the next DM and in fact more because by using them players have gotten dozens and dozens of PC's killed over the years.
But this wasn't the first brush with the Hells over the years in the pages of Dragon there were other articles that set off the Satanic panic before this one. This just happened to have been the gasoline issue to the fire! 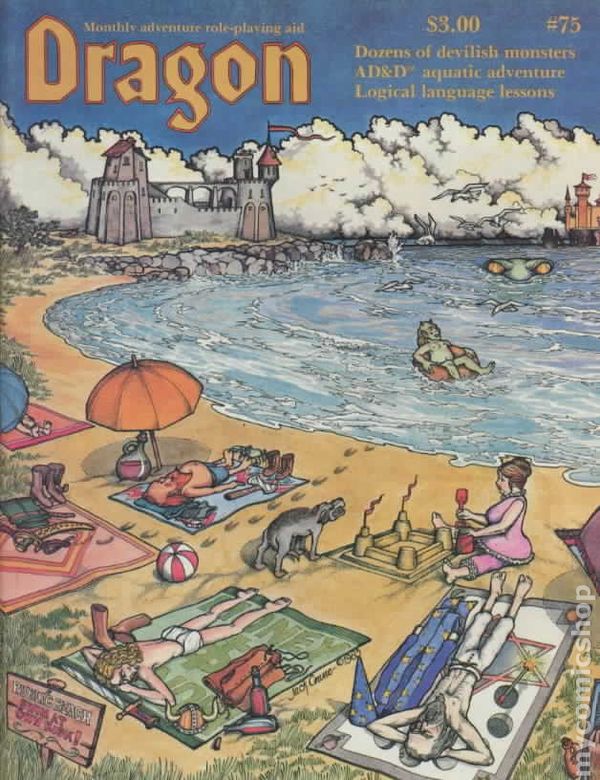 But is there room enough for both Hells in the multiverse? Sure there is and more; old school comic books not Dante provides the answer to this. There are literally thousands of devils and demons all claiming to be the one 'true' Satan, Devil,etc. whatever in the pages of comic books, movies, horror novels, in pop culture.
Should the players have the answers to the questions about the 'true' nature of Hell? Even the fictional damned and undead don't have the answers to this. And getting a soul out of the underworld is never easy for resurrection but that comes with its own risks. Which we'll cover next time.

I have no affliction with Geoffrey O'Dale other then he wrote for Judge's Guild one of my favorite adventures. Incidentally another old friend of mine wrote one of the definitive guides to Dantian Hells.
Nigel Finley wrote for Mayfair Games a great box set called 'To Hell and Back'. It also contradicts both the Judge's Guild material, Dragon, and Dante in some spots. 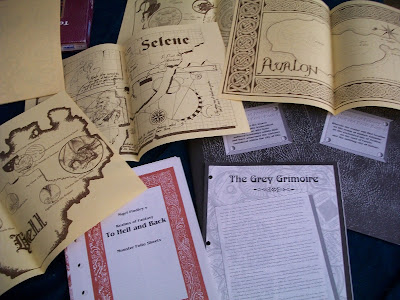 This one's for Rick and those who plum the depths of the Abyss.
Next more U.K. memories, goat men, Rune Quest, Games Workshop, Goths, and Clive Barker! Coming up in part II of Adventures In The Razor Trade.