I'm very excited to see what this movie is about & I can honestly say that I love where this is going. I've been watching this movie for the better part of this year. What's the movie about? Well it was supposed be a prequel to the 1st Alien movie but morphed into something else entirely.
Here's Ridley Scott to actually tell you what its about !

Some of the images from the movie's official site also look very promising!

The plot? Well here's what's been released so far --- Some Spoilers Below! You've been warned!
Current Official SynopsisRidley Scott, director of 'Alien' and 'Blade Runner,' returns to the genre he helped define. With PROMETHEUS, he creates a groundbreaking mythology, in which a team of explorers discover a clue to the origins of mankind on Earth, leading them on a thrilling journey to the darkest corners of the universe. There, they must fight a terrifying battle to save the future of the human race.Original Official SynopsisVisionary filmmaker Ridley Scott returns to the genre he helped define, creating an original science fiction epic set in the most dangerous corners of the universe. The film takes a team of scientists and explorers on a thrilling journey that will test their physical and mental limits and strand them on a distant world, where they will discover the answers to our most profound questions and to life's ultimate mystery.What we know so far:Little is known about Prometheus' plotline. But what we can share with you is that the film is set in space for the most part. Similar to that of "ALIEN"; the jumping off point to this project. The film's name "Prometheus" is that of the space vessel, used by a crew of select individuals who set off to explore and investigate fragments of "Alien DNA".The film itself revolves around the Space Jockey creature; as seen in the original film ALIEN (1979). When the team of scientists embark on this journey, they get stranded on an Alien world which tests their limits; both mental and physical.Prometheus is also largely based on the creation of mankind, life and the Earth. From the recent synopsis publicly released by 20th Century Fox, we can determine roughly that Prometheus involves a team of scientists, "The Company" representatives and robot / synthetics which investigate and search for keys to unlock man's ultimate mystery. But in the process, they threaten the future existence of mankind and are faced with unimaginable horrors.

The Aliens themselves are said to be much larger than the original "Xenomorphs" we are used to. However, their overall construction will be easily noticable to that of the original Alien canon.Prometheus will be much more than just an Alien sci-fi horror. Ridley Scott is digging deeper for this project and Prometheus will unlock many questions and will touch on many aspects of life and existence. A true masterpiece.
All of this is from the Prometheus movie site Here
So how does this relate to a science fiction game? Hmm are you kidding me? This reads like the big sandbox from a game like Traveller, Human Space Empire, etc. I want to see this become something as scary as oh say Event Horizon or something along that line. This might be the movie that brings to the table something that many role playing games promise but fail to deliver. A truly alien encounter, time & again a game will present a dungeon crawl or other wise ordinary bug hunt but all it really is the same old kill the monsters & take their stuff.
I want something a wee bit different & a wee bit stranger. Simply I want something that Traveller promised but failed to do anything for me with. With games like Stars Without Numbers & now Thousand Suns could this trend be changing? 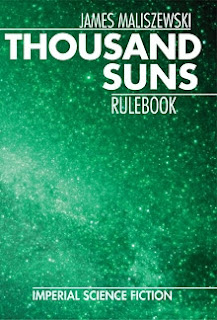 James Maliszewski really seems to really have raised the bar for science fiction table top role playing. I have it on good authority from a friend that this is going to be one to watch. The game seems to take the sky is the limit approach to science fiction. Its on sale right now over Here
Check it out while its on sale for the holidays.
Both the movie & the game look like the first serious signals that 2012 might be a good year for solid science fiction!
Peace out