The American Santa Claus Mythology - A Bit of Adventure Background

There exists other myths & legends handed down to us by Frank L. Baum. There exists a magical forest that has existed since the time after time itself. It is connect with fairyland & lays as the South Western boundary of  Oz!
From The Life & Adventures Santa Claus
Chapter 1 HAVE you heard of the great Forest of Burzee?Nurse used to sing of it when I was a child. She sang of the big tree-. trunks, standing close together, with their roots intertwining below the earth and their branches intertwining above it; of their rough coating of bark and queer, gnarled limbs; of the bushy foliage that roofed the entire forest, save where the sunbeams found a path through which to touch the ground in little spots and to cast weird and curious shadows over the mosses, the ljchens and the drifts of dried leaves.The Forest of Burzee is mighty and grand and awesome to those who steal beneath itsshade. Coming from the sunlit meadows into its mazes it seems at first gloomy, then pleasant, and afterward filled with never-ending delights. For hundreds of years it has flourished in all its magnificence, the silence of its inclosure unbrokensave by the chirp of busy chipmunks, the growl of wild beasts and the songs of birds.Yet Burzee has its inhabitants—for all this. Nature peopled it in the beginning with Fairies, Knooks, Ryls and Nymphs. As long as the Forest stands it will be a home, a refuge and a playground to these sweet immortals, who revel undisturbed in its depths. Civilization has never yet reached Burzee. Will it ever, I wonder?Once so long ago our great-grandfathers could scarcely have heard it mentioned, there lived within the great Forest of Burzee a wood-nymph named Necile. She was closely related to the mighty Queen Zurline, and her home was beneath the shade of a wide-spreading oak.Once every year, on Budding Day, when the trees put forth their new buds, Necile held the Golden Chalice of Ak to the lips of the Queen, who drank therefrom to the prosperity of the Forest. So you see she was a nymph of some importance, and, moreover, it is said she was highly regarded because of her beauty and grace.When she was created she could not have told; Queen Zurline could not have told; the great Ak himself could not have told. It was long ago when the world was new and nymphs were needed to guard the forests and to minister to the wants of the young trees. Then, on some day not remembered, Necile sprang into being; radiant, lovely, straight and slim as the sapling she was created to guard.Her hair was the color that lines a chestnut-bur; her eyes were blue in the sunlight and purple in the shade; her cheeks bloomed with the faint pink that edges the clouds at suns¿t; her lips were full red, pouting and sweet.For costume she adopted oak--leaf green; all the wood--nymphs dress in that color and know no other so desirable. Her dainty feet were sandal-clad, while her head remained bare of covering other than her silken tresses. Necile's duties were few and simple. She kept hurtful weeds from growing beneath her trees and sapping the earth - food required by her charges.She frightened away the Gadgols, who took evil delight in flying against the tree--trunks and wounding them so that they drooped and died from the poisonous contact. In dry seasons she carried water from the brooks and pools and moistened the roots of her thirsty dependents.That was in the beginning. The weeds had now learned to avoid the forests where wood-nymphs dwelt; the loathsome Gadgols no longer dared come nigh; the trees had become old and sturdy and could bear the drought better than when fresh--sprouted.So Necile's duties were lessened, and time grew laggard, while succeeding years became more tiresome and un-eventful than the nymph's joyous spirit loved. Truly the forest--dwellers did not lack amusement. Each full moon they danced in the Royal Circle of the Queen.There were also the Feast of Nuts, the Jubilee of Autumn Tintings, the solemn ceremony of Leaf Shedding and the revelry of Budding Day. But these periods of enjoyment were far apart, and left many weary hours between.That a wood--nymph should grow discontented was not thought of by Necile's sisters. It came upon her only after many years of brooding. 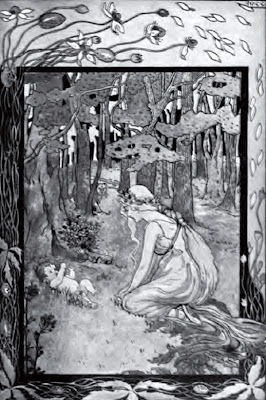 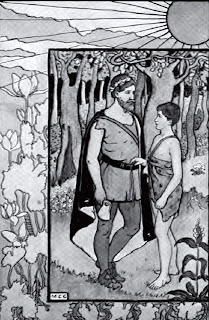 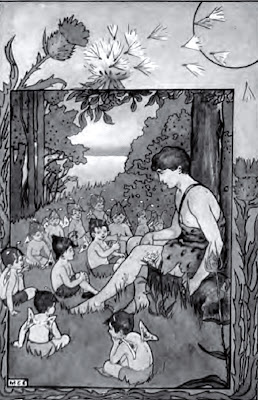 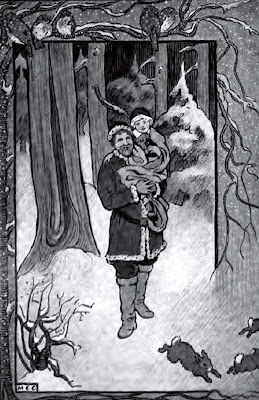 Thanks to the Public Domain Clip Art Blog Here

I've been itching to use this location since Changeling:_The_Lost  came out . However after I went back to D&D & AD&D 1st edition, I found that the fey weren't being used at all as they were in legend. The Forest of Burzee is a very cool location! From Wiki:
he Forest of Burzee is a fictional fairy-tale land originated by L. Frank Baum, famous as the creator of the Land of Oz.
Baum first introduced the Forest of Burzee in his 1902 book The Life and Adventures of Santa Claus, where the fictional setting receives its most extensive treatment and detailed description.[1] The opening chapter of Baum's Queen Zixi of Ix is also set in the Forest of Burzee.[2] A small cluster of Baum short stories also employ the Forest of Burzee as a setting, or at least involved the Forest in some way; these include "A Kidnapped Santa Claus," "The Runaway Shadows," and "Nelebel's Fairyland."
Baum pictures Burzee as a great forest, with "big tree-trunks, standing close together, with their roots intertwining below the earth and their branches intertwining above it;" a place of "queer, gnarled limbs" and "bushy foliage" where the rare sunbeams cast "weird and curious shadows over the mosses, the lichens and the drifts of dried leaves."[3] Among the "giant oak and fir trees" are clearings where "the grass grew green and soft as velvet."[4] The Forest is populated by fairies, ruled by a queen (either Zurline or Lulea, depending upon the specific work), along with nymphs, gnomes, pixies, and species of beings invented by Baum, ryls,knooks, and gigans.
Burzee is not an entirely benign place, however. It contains predators: Shiegra the lioness (Life and Adventures of Santa Claus) and Kahtah the tiger ("Runaway Shadows").
At first, Burzee had no direct connection with Oz. A link was forged in the fifth Oz book, The Road to Oz, in which visitors from Burzee attend the grand celebration that closes that book.[5] The map of Oz and its neighboring lands that appeared in Tik-Tok of Oz included the Forest as one of those border regions. Eventually, Royal Historian Jack Snow featured the Forest of Burzee in his first Oz book, The Magical Mimics in Oz, in 1946. Later Oz authors occasionally mention Burzee; David Hardenbrook's The Unknown Witches of Oz is one example.

Here are some of the resources I'll be pulling from while designing this adventure for Thursday:
The players will be thinking this Santa_Claus & what they'll be getting is the world created by L._Frank_Baum. Baum remains one of my favorite authors.


Edge Of The Burzee Wood Random Encounters Roll 1d10
Posted by Needles at 11:03 AM