So yesterday I came across this book 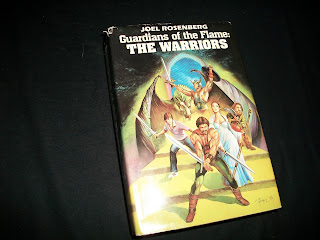 Picked it up for .50 & yeah its a book club edition & started to read the series. The book is fantastic. Its basically what would happen if a bunch of college students were transported to their Dungeon Master's campaign world back in '85.

So basically its sort of a grown up version of the D&D cartoon with grown up problems. Everything you think might happen sex, people getting killed by monsters, psychological problems resulting from getting transported etc. Its all there but told in an entertaining manner.

The author files the numbers off but this AD&D without a doubt. Further research turned up this:

This omnibus volume brings together Rosenberg's first fantasy trilogy (The Sleeping Dragon; The Sword and the Chain; The Silver Crown), which if not terribly original boasts energy, wit and a strong moral sensibility. An amiable group of college role-playing gamers enters an alternate world, the land of Pandathaway, where the treachery of their philosophy professor, Arthur Simpson Deighton, launches them on a deadly quest for a magical talisman that would give Deighton almost unlimited power. At the same time, the students seek to rid their new world of the tyranny of the Slaver's Guild. So the dilettante Karl Cullinane becomes the shrewd and mighty warrior Barak; Andrea Andropolous becomes the potent wizard Lotana (as well as Karl's wife); and James Michael Finnegan rises from his wheelchair to be permanently mobile as the dwarf Ahira Bandylegs. Along the way, they acquire some memorable allies, such as the sarcastic young dragon Ellegon, the barely sane ex-slave Tennetty and a girl, Aeia, who ought to be learning to read instead of becoming a deft hand with a crossbow. The group faces an implacable enemy in Ohlmin, the master slaver, and a somewhat uncertain future as their prowess and knowledge forever change Pandathaway. Fast-paced and intelligent, this reprint should gain new fans for Rosenberg.
Copyright 2002 Reed Business Information, Inc.
There's death, maiming, slavery, bad food and water, horrible monsters and people, and women are brutalized and treated poorly by the locals.
Like I said the books are entertaining, the author does a great job of giving his characters a hell of a lot more depth then the cartoon sure did. There's no annoying unicorn either. This isn't a Saturday morning watered down episode.
Here's the series of novels & order:
This isn't fan fiction but a series written by an author who knew his stuff. You can find more about the series right Guardians_of_the_Flame
I'm writing of the author in the past tense because
Joel Rosenberg passed away unexpectedly on June 2, 2011

Personally I think its a great series & recommend it to those who play A&D as both a source of entertainment & some fantastic ideas. The author will surely be missed by a new fan. His fan site can be found Here
More Space Stuff soon
Posted by Needles at 9:06 AM

Email ThisBlogThis!Share to TwitterShare to FacebookShare to Pinterest
Labels: inspiration