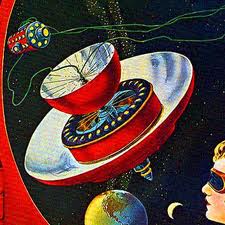 The players discovered the reason why the space bovines were breaking down the planetoid tonight. The whole thing came about when the party found the herd boss headed back to the planetoid tonight. They intercepted a transmission coming in from him to the cows to stay away from a valley planetside. There were strange energy transmissions coming from planet side.
Turns out the cows were keeping away from an area of hard radiation. The place was almost sizzling.
There in the valley was a star ship with its engines still giving off the emissions sort of like

The whole thing took a turn for the weird when they launched a probe & it turned out the ship was a half living bio ship of an unknown race. The damping field was the only thing holding the planetoid together & the space cows were already done with the place. The party needed to have a group of  robot drones milk the cows of their precious cargo. The party was had more then half of the cow hands aboard ship & were treating them for heavy radiation burns. Turns out the herd boss had many of them under contract & that he was keeping their families as  collateral until the job was done.
The party wants to teleport planet side but the damping field is still in place. A few rolls of the dice & they determine that tunnel through thought space might be just the thing. They create the tunnel & it links to the bio ship. Inside they find themselves surrounded by weird tunnels stretching in all kinds of directions.

The party consisted of the astronaut, his lady knight her handmaiden, an engineer, & a warrior. They were confronted by 9 of these things ndunchelurm-insects-from-grand-darkness.html
I kept harrying the party with them. They'd destroy a few slip on some bio acid, & get more bugs. Until they came to the control room. That's when this guy almost came down on them
The players froze & the lurker missed them. They blazed away at the monster with energy weapons. A huge puddle of bio acid oozed out from the alien monster & damaged the ship. They began to notice swaths of the ship damaged. It was extensive & the ship was dying.
The herd boss's transmissions were jammed & he his crew were wondering what was going on.
Seems that the whole "mining operation" was to free the bio ship from the planetoid where it had been resting for over 2000 years.
The party finally makes it to the control room & what they find are skeletons of humanoids, slap dashed mechanical cybernetic machines connected to the psychic matrix of the ship & a renegade spocery guild member. He's dead & decayed but still it creeped them out
The mind is in shut down mode.

The party goes about the business of awakening the mind. It demands to know why the meat bags are on board! Are they with the guild & why is everything changed? How much time has passed? Etc
From around the control room 6 gargoyles awaken!

The players are compelely taken by surprise. Weapons start blazing & combat occurs all are destroyed accept one of them appears smarter then the others!
This one is wearing a piece of jewelry

The player rolls a natural 20 & grabs the necklace from the fiend. The leader has super science powers & freezes the player. The player rolls his save vs rays only taking half damage.
The player finally after 5 rounds finishes the monster.
The necklace is glowing & activates! It teleports the entire party & the ship half way across the solar system more to come!
Posted by Needles at 9:56 PM