“Pellucidar, as every schoolboy knows, is a world within a world, lying as it does, upon the inner surface of the hollow sphere, which is the Earth.” So begins Tarzan at the Earth’s Core, the fourth book of the Pellucidar series written by Edgar Rice Burroughs.
Pellucidar is one of those places of the imagination that never gets old or tired. It was first published in 1914 & remains a pulp staple for all times. Wiki breaks down the story here - The author relates how, traveling in the Sahara desert, he has encountered a remarkable vehicle and its pilot, David Innes, a man with a remarkable story to tell.
David is a mining heir who finances the experimental "iron mole," an excavating vehicle designed by his elderly inventor friend Abner Perry. In a test run, they discover the vehicle cannot be turned, and it burrows 500 miles into the Earth's crust, emerging into the unknown interior world of Pellucidar. In Burroughs' concept, the Earth is a hollow shell with Pellucidar as the internal surface of that shell.
Pellucidar is inhabited by prehistoric creatures of all geological eras, and dominated by the Mahars, a species of flying reptile both intelligent and civilized, but which enslaves and preys on the local stone-age humans. Innes and Perry are captured by the Mahars' ape-like Sagoth servants and taken with other human captives to the chief Mahar city of Phutra. Among their fellow captives are the brave Ghak, the Hairy One, from the country of Sari, the shifty Hooja the Sly One and the lovely Dian the Beautiful of Amoz.
David, attracted to Dian, defends her against the unwanted attentions of Hooja, but due to his ignorance of local customs she assumes he wants her as a slave, not a friend or lover, and subsequently snubs him. Only later, after Hooja slips their captors in a dark tunnel and forces Dian to leave with him, does David learn from Ghak the cause of the misunderstanding.
Obsessed with righting the wrong he has unwittingly done Dian, David escapes again and eventually finds and wins her by defeating the malevolent Jubal the Ugly One, another unwanted suitor. David makes amends, and he and Dian wed.
In Phutra the captives become slaves, and the two surface worlders learn more of Pellucidar and Mahar society. The Mahars are all female, reproducing parthogenetically by means of a closely-guarded "Great Secret" contained in a Mahar book. David learns that they also feast on selected human captives in a secret ritual. In a disturbance, David manages to escape Phutra, becomes lost, and experiences a number of adventures before sneaking back into the city. Rejoining Abner, he finds the latter did not even realize he was gone, and the two discover that time in Pellucidar, in the absence of objective means to measure it, is a subjective thing, experienced by different people at different rates.
Later, along with Ghak and other allies, David and Abner lead a revolt of humankind against the Mahars. Their foes are hampered by the loss of the Great Secret, which David has stolen and hidden. To further the struggle David returns to the Iron Mole, in which he and Dian propose to travel back to the surface world to procure outer world technology. Only after it is underway does he discover that Hooja has substituted a drugged Mahar for Dian. The creature attacks David but is overcome, and the return to the surface world proceeds successfully.
Back in the world we know David meets the author, who after hearing his tale and seeing his prehistoric captive, helps him resupply and prepare the mole for the return to Pellucidar.

At The Earth's Core & The OSR
This was the book that my father gave me as a kid & as I've got the whole series it remains pretty special to me. There are several species of dinosaur that are found within its pages that aren't found anyplace else. The novel makes use of it being part of the greater Burroughverse with various references throughout. Yet how does a modern Dungeon Master make use of both the setting & its inhabitants? Well the nice folks over at ERBZine have some really awesome articles that can be of great use to a Dungeon Master !
Dinosaur Survival On Earth
Where Is The Opening To Pellucidar
At The Earth's Core Publication History
Wait There's More!
Von Horst's Pellucidar
Pellucidar from Wiki

On A Side Note - John Eric Holmes' Mahars of Pellucidar was a sequel to Burroughs' Pellucidar novels authorized by the Burroughs estate. Publication of Holmes' follow-up novel, Red Axe of Pellucidar, reportedly ready for print in 1980, was supposedly blocked by the estate, and only saw print much later in a limited private edition. Read about that Here

Many of the retro clones contain stats for dinosaurs of every strip & the D&D of course had the Hollow World. Recently with the upcoming release of Carcosa from James Edward Raggi IV Here
Every time I'm  thinking of Carcosa I'm thinking of  Mutant Dinosaurs!
Simply take your favorite dinosaur species add Gamma World style mutations , rock & roll with party!  The setting is large enough to support anything you might throw at them!  Best of all  At The Earth's Core is within the Public Domain. There's never going to be a Wizard's Of  The Coast  breathing down your neck ever! 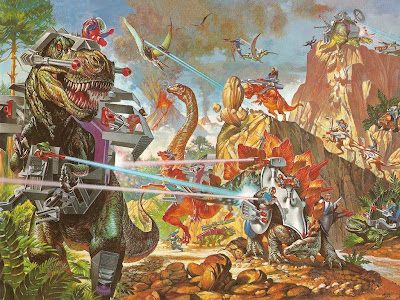 What About Spacccee!
We can do space. There enough 80s dino cartoons out there that can give a gazillion ideas but if you want your dinos to have  death dealing weapons of terror & destruction. Go Here
Posted by Needles at 5:43 PM