What's An Alien Invasion Among Friends?! - The New Marvel Phile 'The Shadowline Saga' & The Tallman- Session Report One

"You think that when you die, you go to Heaven? You come to us!"
The Tall Man To Mike Phantasm Two

This blog post picks right up from this blog entry here. 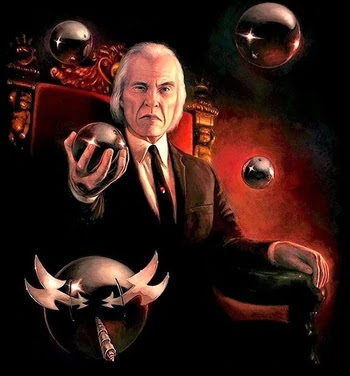 The year is 1939 & it's a warm October night. The shadows have grown long on New Ashford. The town of only 200 residents has has had an influx of tourists to attend the local Fall Festival. These include supers known as 'The Blackguard' a group of supers doing their best to raise awareness of the gathering storm of the Nazi's in Europe. Who this group of supers actually is?! These are a group of shadows & deviants from several of the Mid-West's & New England tribes. They've come together after the appearance of their Earth's Doc Zero revealed himself to the world.

The Blackguard have come to New Ashford for another reason entirely. They've been following the trail of broken towns that the Tallman has left in his wake. During tonight's game the Blackguard has come to attend the furneral of one of their own. The Violet Scorpion has been killed in Europe & a team of super agents has recovered the body. Twin funeral directors met the PC's in their civilian guises to lay their friend to rest.

But all is not as it seems when one of our party's animal like scents notices the abscence of the corpse. The Animal let's his friends know after the ceramonies are over back at their hotel. The party wants to go back to the funeral home to check things out after they make contact with Brother Jenkins their shadow's local tribal leader. The Blackguard learned of a Knight of the Order of St.George in New Ashford. But they also learned that he was there for the Tall Man & then it was off to the funeral home!
They ran into eight maskers  loading caskets onto hearses and it was on! The maskers were armed with chain saws & pick axes!

The Blackguard elimated every last masker they could. And then moved into the funeral home's interior. And things got very interesting the party encountered their first set of  sentinel spheres. And it got really interesting as one of the spheres took out Lady D. Drilling deep into her skull the horrid thing didn't stop till she was dead!
The rest of the Black Guard blasted the remaining to spheres. And then the party took care of their friend's corpse to prevent it from being reanimated by the Tall Man. In a side room they found the first of a series of dimensional forks. They ran into more gravers and blasted their way out of the funeral home.
The party figures they need to have a magic user among their ranks before proceeding.

All in all tonight game was very interesting to say the least . Gotta say that the Marvel Phile 'The Shadowline Saga' supplement came in really handy for tonight's Marvel Superheroes rpg session. 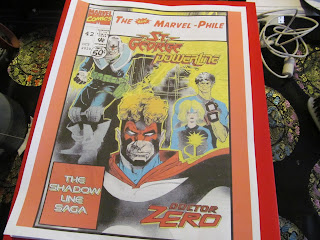 So what happens next week?! The PC's are going to go before the rest of the Shadows council & ask the 'First Line' for a Shadow wizard. Let's see what that's going too look like coming up next time!