OSR Review & Commentary On 'Abyss' by Paul Elliot From Zozer Games For the Hostile Rpg or old school 2d6 Science Fiction based rpg's.

"You think this hyper-populated island on this miserable waterworld is bad? The crime? The corruption? The lack of privacy and housing? The rationing and queues? You hate it because its all you know ... Me? I've got another six month tour on the seabed starting tomorrow. Six months almost two miles down, breathing stale air, no sun, no freedom, no free-time, and just the same twelve people to talk to. Now, how bad is this island again?"  - Crawler driver Hilton Varez, Clan Bakar

A supplement for the Hostile RPG and Cepheus Engine. 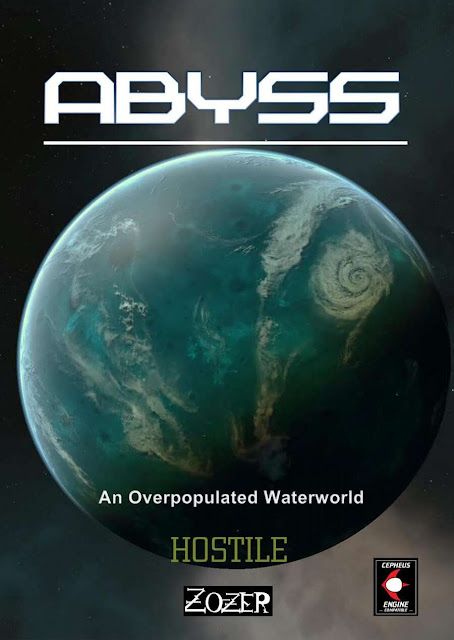 "Abyss is an overcrowded world, a world where the most prized possession is land and real estate. It is a waterworld, a single planet covered by a single shallow ocean, the only land available for settlement is the tiny island of Vasundhara as well as a scatter of small island chains. Life can be hard on the planet, poverty and squalor are commonplace, wealth and living space is held as a privilege by a few, whilst the millions compete for survival inside the noisy, crowded, trash-filled, dirty, cramped and crime-ridden ‘Warrens’. Much of the island is intensely urbanised, skyscrapers and apartment blocks jostle with factories and sky-high shopping centres. " 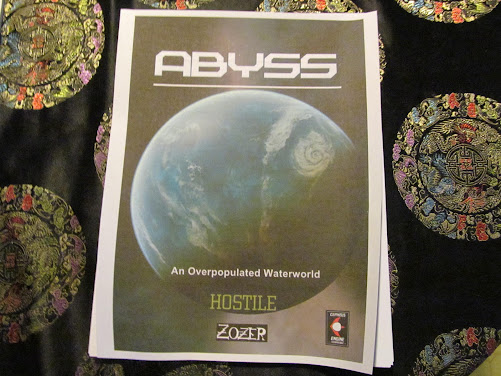 Abyss by Paul Elliot from Zozer Games is an underwater world & supplement that hits two high marks. One a world of cyberpunk style corporate intrigue & danger this is one where we could easily translate over a Zaibatsu rpg campaign. Two Abyss succeeds as an alternative venue for PC's looking for the big bonuses & an another  avenue of pay for their PC's. 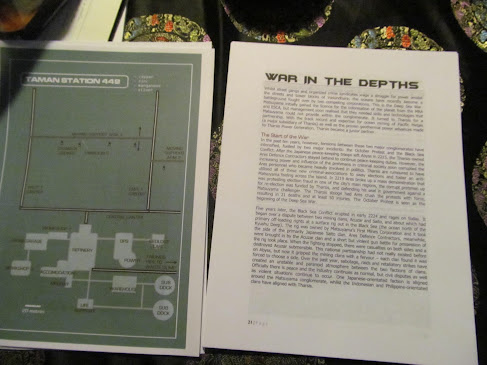 There have been other water borne & underwater supplements for old school Traveller rpg style worlds. But nothing like Abyss brings to the table with various factions in control of the underwater world, rules for underwater combat, mining, and more! Abyss is a world of high corporate backstabbing & the fate of the planet's resources hang in the balance.

All of the factions in Hostile are here in spades plus new major corporations interested in dividing up this oceanic paradise. The world sea based life forms seem almost entirely responsible to the nine million colonizers who have descended on this water based sea world. As the colonists try to extract the mineral wealth the planet seeks to end the lives of those on this watery world. 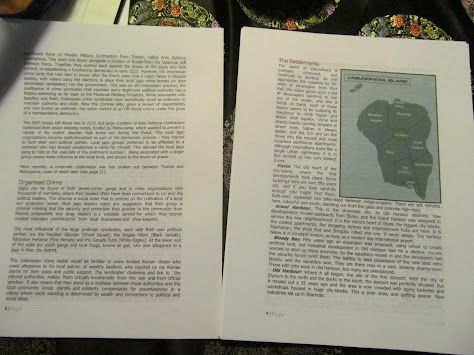 The islands in Abyss are rife with adventure possibilities but below the water?! Well that's a whole other world of Hostile possibility where you can strike it rich or be eaten by an alien underwater life form. Abyss has rules, NPC's, equipment, and more all for underwater 2d6 Hostile or Cepheus Engine rpg adventuring & action. 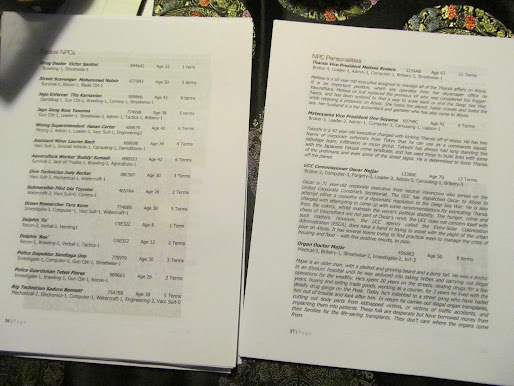 Abyss is the head for a tough industry & the PC's are going to have to be just as tough as the underwater enviroment that they face. Abyss may be exo planet but it's an exo planet with a difference. And that's the amount of danger as well adversity that the PC's face. Given Abyss's  layout, cartography, writing , and more are well up the Hostile rpg's general standards easily. Paul Elliot as well as the Hostile contributors know their stuff Abyss is fast becoming a Hostile favorite. And it's an adventure supplement that I'll be inflicting on my Hostile players coming up!
So is Abysss worth getting?! Absolutely and there's a few reasons why! This takes your Hostile rpg PC's into an unfamilar enviroment, there's rules for generating brand new PC's and NPC's to interact with, the PC's have the chance to make a difference in the corporate environs of Abyss, & for the nine million reasons located on the surface of Abyss. Did I mention that there's the chance that your PC might strike it rich or be eaten!?
Abyss is a great addition to the Zozer games product line of Hostile rpg books! And
'Abyss' by Paul Elliot From Zozer Games For the Hostile Rpg or old school 2d6 Science Fiction based rpg's Is Available Here
Posted by Needles at 2:53 PM