Work has been keeping me really on the run & even though we're getting around the bend from Thanksgiving. I've managed to sneak into DM Steve's  Subsector Hub mini campaign for the Clement Sector rpg. Now there's a very good reason for this & it's actually get a feel for the actual play of the setting. 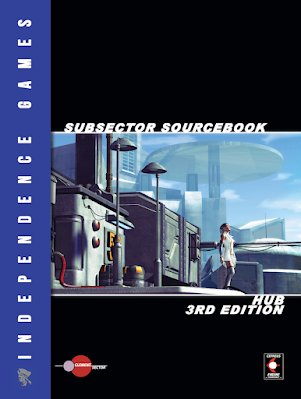 The Subsector sourcebook Hub has been updated into third edition. And there's a reason for this; "Hub Subsector was the first place those coming from Earth Sector saw when they arrived in Clement Sector. It is the oldest and most cosmopolitan of the subsectors of Clement Sector. It is also home to the sector’s only interstellar polity, The Hub Federation. The first of the subsectors to be settled"
Don't let the fact that the sector’s only interstellar polity is the Hub Federation. This is a subsector on the edge of a very deep frontier of the unknown & blackness.
Subsector Hub feels like an expanded frontier area settled but highly wild & untamed. A place that settlers can come to, make a living, and still be on the edge of the Frontier of the Clement sector.
What we get in the Subsector Sourcebook Hub is details about the worlds, the political situations, and the inhabitants. These details paint a very different picture when one starts to be a part of a crew in the subsector.
Here we get the edge on feeling of Hub & it's setting from the first hand perspective. I feel that the Subsector Sourcebook Hub does a great job of conveying those details in spades.
Once again it reminds one of the feel of the Old West without being too indulgant into the Western tropes instead pulling on Old Western & Civil War analogies. Or at least that's how Hub feels through the writings of John Watts. The Clement Sector literally is tied at the hip with the Hub subsector & it's a solid way of dealing with the settings. 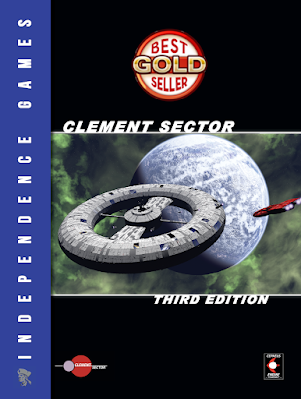 We deal with Kasya about three nights ago & it's interesting; "Kasaya is the location of the first settlement on Totaro. It is currently the capital of the planet and home to the House of Representatives, the House of Councilors, and the President. The current population of the city is just over 18 million. The city is built around an inlet in the northeastern portion of the Kosado Sea. All of the buildings here are rounded to survive the high winds that come from the salt flats to the south of the city. Many of the buildings are quite tall and have measures in place to survive the winds such as wind conduits. The city is home to a fine B-class downport which is rated three stars by the Captain’s Guild. The downport is located to the east of the city. One can reach the downport by maglev train or shuttle."
That B class downport was the meeting with a spy from one of the other colony worlds in the subsector Hub worlds. The fact is that there's a lot of intrigue, double dealing, & much more between the militaries of the Hub worlds. With that being said I believe that in our game the biggest threat is going to be coming from outside.
The Subsector Hub sourcebook is highly detailed, well thought out, and has Independence games continued excellence & eye towards quality. But is it worth the download?! In a word, yes! The level of detail here is nothing short of solidly done & of excellent quality! This continues the streak of quality that we've seen within the Independence Games line of Cepheus Engine rpg products!
Subsector Sourcebook: Hub By John Watts For the Clement Sector, Cepheus Engine, & Old School 2d6 Science Fiction rpg's Is Available Here