Retro Review - Reptiliads Their History, Society, & Military System & The 'Battle Cry of the Reptiliads' For Your Old School Campaigns 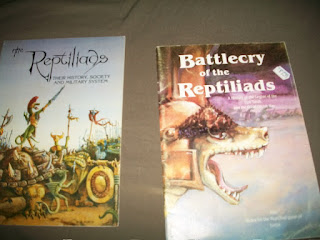 Way back in the annals of time when War & Pieces existed in West Hartford Ct.back in the early Eighties the store had an in house Empire of the Petal Throne game going. Back then I was knee deep into the M.A.R. Barker's in house universe setting &  one Friday  I was dropped into the back end of a group of nine players. Now I don't want to say that these folks were a nightmare but they knew the good professor's universe back to front and they were supposedly taking a subtrain car to another country. Fortunately I was in a wargaming & gaming shop, so I picked up the latest issue of Dragon and the first page I opened had an add in it for RAFM's Reptiliads army book which contains the history, culture, army structure. There was also a second one called Battlecry of the Reptiliads: A History of the Legion of the Iron Tanth and the Great Orcish War. 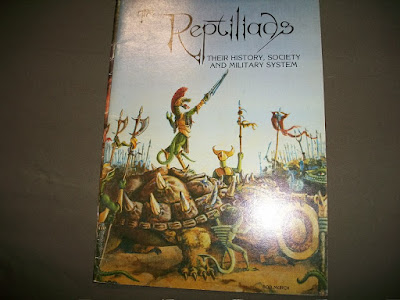 If you know anything about Empire of the Petal Throne you know that its a metal poor former interstellar empire world that was locked away in an a pocket universe for safe keeping. The high interstellar level of technology quickly disappated and the former alien races on the planet quickly degenerated into savagery and magic. This of course included the human population too. Reptiliads was a perfect little bundle to bring in another race of alien humanoid reptile men into the ruins of that colony world. The whole thing worked like a charm. Because this is from an era when the crossover from wargames & role playing wasn't that far off. We were given far more details such as the society and cultural history of the Reptiliad race and yet there was more then enough room for a DM to fill in what was needed for their own games. 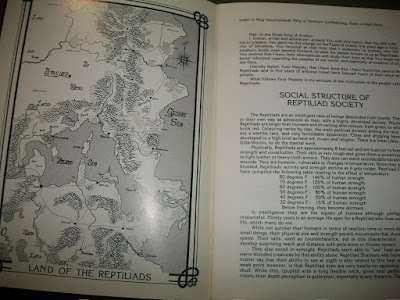 We were given lots of background such as the back culture, langauges, religion, social structures, the world view, and much more including a complete work up from the ground of the entire world of these reptilian warriors. This made presenting them as a forgotten alien culture especially easy and it worked like a charm. 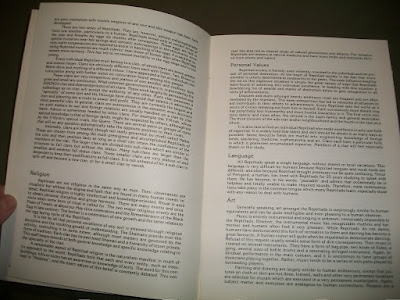 This book functions as an all access pass into the military as well as the setting of the Replitiads and gives all of the background necessary for a DM to breath life and details into the world that these creatures can be dropped into including background on weapons, tactics, clans, clutches and battle turtles as well as specialized warriors.

The military system is dangerous and somewhat violent lending a bit more menace to these lizardmen like warriors then one might expect. I've used them as a race to rival D&D own lizard men in sword and sorcery games. 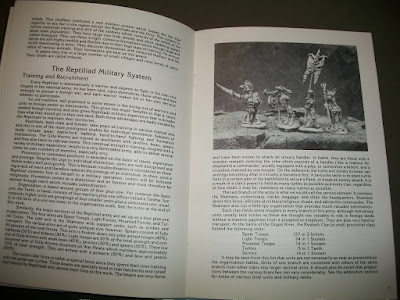 Given the amount of details about these beings its easy to drag and drop them into any jungle or lost world setting and surprisingly they work quite well especially in the OD&D Hollow World setting. The clan structure of the reptile warriors works nicely in D&D's background and with a little work easily fit many of the old school AD&D 1st or OD&D rules. 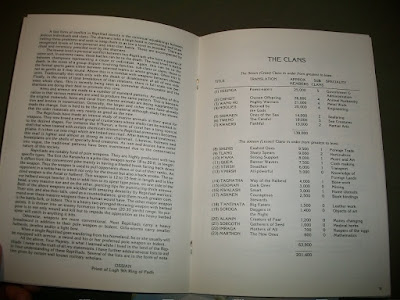 You get a hierarchy of these ancient lost world warriors and there is enough to use them as a PC race with a little work. I've had both PC and NPC Reptiliads show up in a wide variety of campaigns and there are still friends who recall these noble and savage warriors of the jungles. 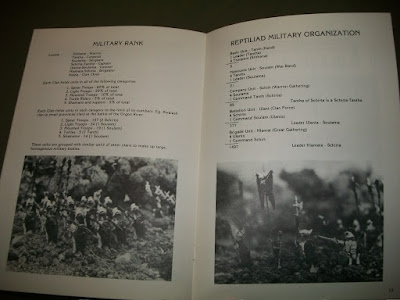 Reptiliads battle turtles and warriors are sights that both Gamma World and Metamorphosis Alpha first edition players came to fear. The Empire of the Petal Throne players actually opened a trade deal with them after losing a particularly troubling adventurer to a clutch of warriors. 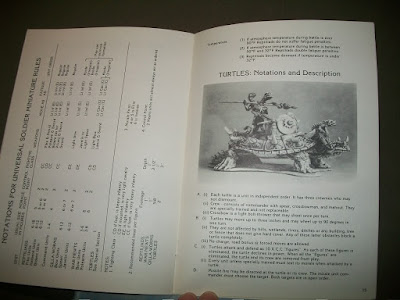 Sadly this book is long out of print but our second title has some great merit as a companion piece to the Reptiliads book. The lone sight of a Reptiliad fortress or temple was a sight that chilled many an adventurer in my games over the years 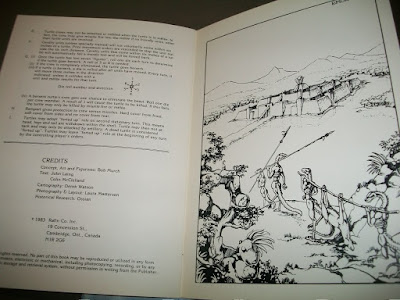 The 'Battle Cry of the Reptiliads' is a slightly different book with a different slant on the Reptiliads, amazingly the book is still in print and very reasonable.  Selling for four ninety five and packed with lots of information about these reptile warriors. 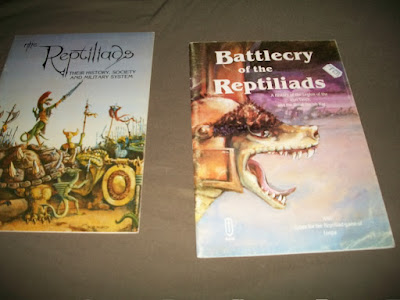 What's in the Battlecry of The Reptiliads book; "
Battlecry of the Reptiliads: A History of the Legion of the Iron Tanth and the Great Orcish War. Also included the rules for the Reptiliad Game of Lurpa. Text by Bob Murch, Colin McClelland and Susan Crane. Artwork by Bob Murch. Rules and information on the Game of Lurpa by Lee van Schaik, Claude Burns, Paul Sharpe and James van Schaik. © 1988 Rafm Company Inc. Cambridge, Ontario, Canada. ISBN 0 920727 08 5. Printed in Canada.

36 page paperback booklet (7” x 10”) with two maps on the inside of the covers, a 4 page section of painted miniatures and colour artwork between pages 18 and 19. There are monochrome illustrations throughout." 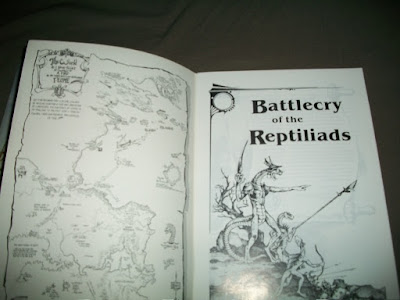 We get everything on the society and world of the Reptiliads and everything is broken down from their society to their relations with other standard fantasy races and for an older book its very well done. Even though this is monochrome artwork, there's something very old school about the line work here. Everything works towards fleshing out these reptiles and their world. 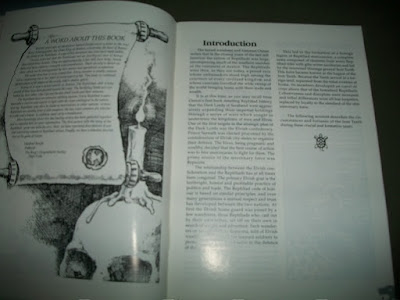 We get tons of background & the conflicts that shape these reptile warriors view point of the greater world. The fact is that much of this is generic enough to drop into any D&D campaign world is a huge plus. 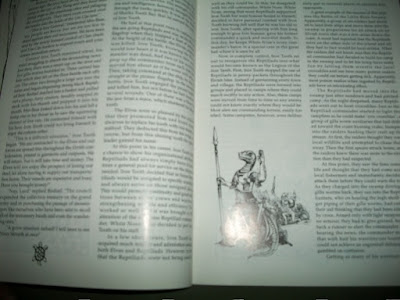 Mostly everything here is based around the wargame origins of our collective hobbies & its very old school Eighties material trying desperately trying to escape the specter of Dungeons and Dragons. 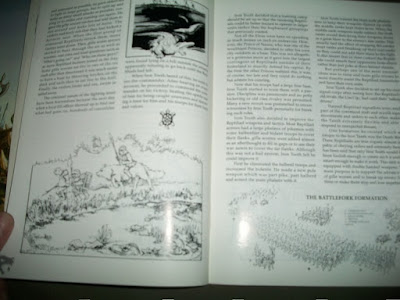 All of the traditional races from Dwarves to Orcs have had dealings with these reptile warriors. The Elves were real jerks towards the Reptiliads and deserved what they got in the coming conflict. 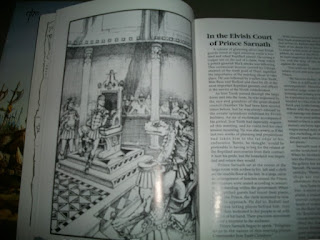 Here we get lots and lots of lurid details about the fortresses,military set ups, the paint schemes, and much more. 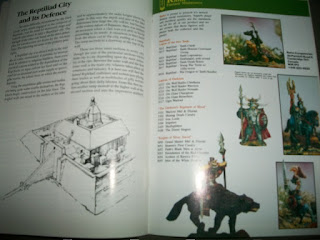 All of this book highlights the lurid and oh so worth it colour sections of the book. There is a pulpy vibe that runs through out  'Battle Cry of the Reptiliads' 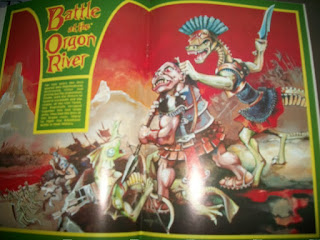 Everything in this book gives the reptile warriors a sense of proportion and a completeness  in the work up that will help flesh out the world of the Reptiliads for a DM. These are warriors who have a real purpose and goal for expansion. 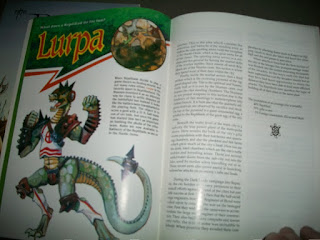 Finally we're given maps, a mini game, and much more to bring the world of the Reptiliads to life and even a few potential NPC's to deal inside these reptile men's world. The maps that come with both books are killer, the cartography is nice and everything is woven into the world that these book make come to life. Perfect campaign fodder for an old school game that is looking for that different twist on the usual races. 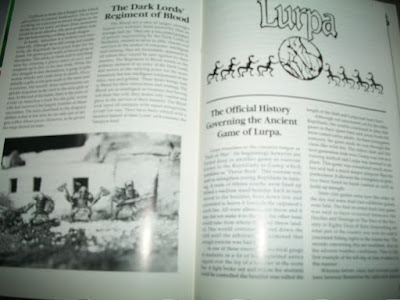 We're even given a mini game of Lurpa, game revered by the Reptiliads and their ilk. Much of this section centers around the themes of the game and its place within the reptile men's society. 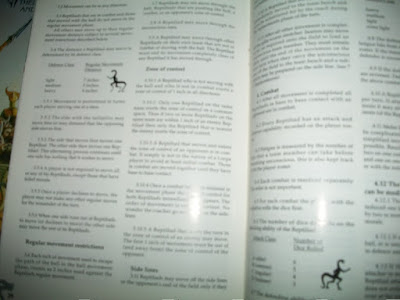 For an army book there's lots of interesting fun details. All of this is geared toward creating a better uniform feeling.All of this is packaged tightly round some powerful factions and double dealing characters. 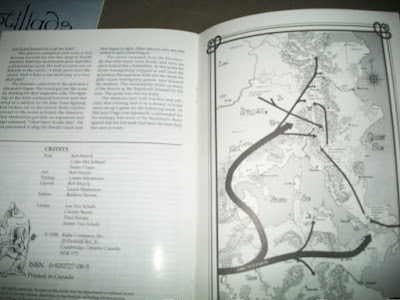 About ninety nine percent of this book is perfectly usable as a campaign fodder and the book does a surprisingly good job at presentation and as a potential campaign adventure location. 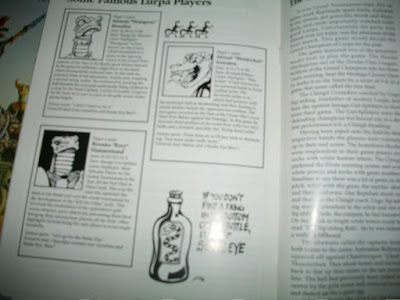 Believe it or not these old school books have valid campaign use and if you find them to have as much fun to look through and use then that's all that counts. Retro Review - Reptiliads Their History, Society, & Militery System & The 'Battle Cry of the Reptiliads' come from another era but remain perfect campaign fodder if you're into just this sort of products that has survived into our modern world.Amazingly RAFM is still producing and stocking the Reptiliad figures and minis on their website.
Posted by Needles at 8:02 PM