"When I drew nigh the nameless city I knew it was accursed. I was traveling in a parched and terrible valley under the moon, and afar I saw it protruding uncannily above the sands as parts of a corpse may protrude from an ill-made grave. Fear spoke from the age-worn stones of this hoary survivor of the deluge, this great-grandfather of the eldest pyramid; and a viewless aura repelled me and bade me retreat from antique and sinister secrets that no man should see, and no man else had dared to see.."
"The Nameless City" is a short horror story written by American writer H. P. Lovecraft in January 1921 and first published in the November 1921 issue of the amateur press journal The Wolverine. "

So I've been looking into doing some research into doing a possible Lovecraftian campaign adventure using my Carcosa rpg /Cha'alt crossover planetary campaign. Yesterday I did a review on  SERPENTINE - Oldskull Serpent Folk By Kent David Kelly
Digging deeper into my campaign notes I came across one of my all time favorite HP Lovecraft short stories 'The Nameless City'. 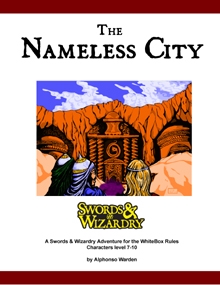 So when I heard that Alphonso Warden had done a Swords & Wizardry adventure called 'The Nameless City' I had to grab it. This adventure is nine years old & while its now considered an OSR classic in some circles.  To me 'The Nameless City' & the Lovecraftian serpent men of the city's adventure were the rivals of the prime  Serpent Men empire of  Valusia . This adventure even has this in the adventure introduction;" Well over 50,000 years ago, the vast desert – called the Dunes of Despair by the nomad tribes that now call this place home – was a lush tropical jungle bordered on the west by a small sea. In this distant age, a race of vaguely humanoid ophidian creatures, descended from nothing less than dinosaurs, dominated the primitive hunter/gatherer tribes of humans who shared the jungle with them. The latter were regarded by the former as inferior specimens of life, fit only for use as slaves and food. With time, however, the primitive humans developed a civilization of their own, one almost rivaling that of their ophidian oppressors. They even went so far as to declare formal war on their ancient enemies, oftentimes being quite successful in their efforts. However, the elder magicks in possession of the serpent people always kept such uprisings to a manageable level."
" And so the situation stood until around 20,000 years ago, when the planet experienced a dramatic climate change which, virtually overnight in geological time, transformed the once verdant lands of the serpent people and the neighboring humans into barren desert. The bodies of the serpent people were unable to withstand the extreme heat and lack of moisture on the surface, and they were eventually forced to seek out the much cooler natural caverns beneath the earth. Eventually, they abandoned their above ground city altogether, and focused their efforts on building a vast subterranean metropolis. However, underground life, while preferable to that on the surface, forced the serpent people to sustain themselves on little more than insects and cave fish"
So 'the Dunes of Despair' is a vast  section in the trackless wasteland that has entered the local mythology as a cursed part of the desert. The perfect place to set up a rival to the classic desert ruins of  B4 The Lost City by Tom Moldvay. Vast tracks of abandoned city & weird dungeons make the perfect set up for the remains of the vast serpent men empires. 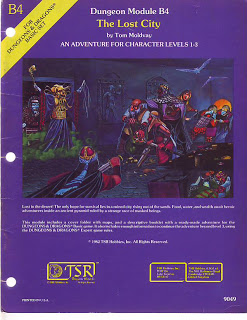 In point of fact the entire module of 'The Nameless City' could be ported over into the back end ruins of B4 The Lost City by Tom Moldvay. This means that the dungeons of ancient Serpent Empire which was based on sorcery and alchemy perfectly aligns with some of the Lovecraftian adventure elements seen in B4. A possible problem if one wants to call it that is the fact that many of the inhabitants of the 'Nameless City' might not in fact be Serpent Men! They are in point of fact the reptilian lizard like species as depicted by H.P. Lovecraft; "
Posted by Needles at 11:11 AM