Over a thousand years ago, the Zaharan Sorcerer-Queen Semiramis reigned over a court notorious for its decadent arts and lavish opulence. The hidebound nobles of Zahar were troubled by the ascendance of the kingdom’s first female monarch. Semiramis was beset by over one hundred suitors, each one demanding that she marry him so that the kingdom might have a king. Many of these suitors were powerful spellcasters who wove enchantments upon her, but to no avail: The Sorceress-Queen wore the Ring of the Queen’s Heart, a legendary magic item gifted to her by the goddess Nasga that made her immune to her suitor’s charms.

As beautiful and cruel as her goddess, Semiramis instead seduced her perfidious suitors into swearing eternal love to her – then had them slain. The Sorceress-Queen mummified and interred all one hundred suitors in her own majestic sepulcher, where they would serve her as loyally in death as they ought to have in life.

Since then, the sepulcher of the sorceress-queen has lain hidden and undisturbed, its undead inhabitants slumbering in torpor until the prophesied time of the Awakening. But now a reckless warband of lizardmen has broken open the ancient tomb and disturbed evils not seen in centuries… 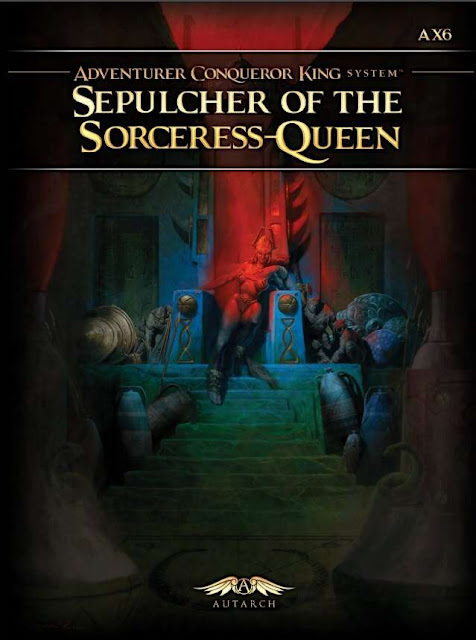 When it comes to anything ancient Egyptian themed I'm a huge sucker for OSR supplements, books,& especially adventures. So when it came to the Middle Kingdom inspired Adventurer,Conqueror,King rpg AX6: Sepulcher of the Sorceress-Queen (SoSQ) adventure I was all in. So much so that I stepped up & bought in on the Table Top Game On Funding Project. This is not a huge adventure & it clocks in at fifty six pages of OSR goodness but realize that this is a nasty little dungeon romp for PC's levels 7-9.

This isn't the usual animal of an adventure when it comes to ACK's because the Zaharan Sorcerer-Queen Semiramis is a menace in every sense of the word here. If the dungeon isn't cleared & her reign of evil isn't stopped then things are going to get beyond ugly for the PC's here. Our witch queen is set up in this adventure to become a real thorn in the sides of the PC's if she's not put down. That's the whole cloth issue here
This is a nasty dungeon as well with tricks,traps, & some really nasty monsters all crammed & jammed into fifty six pages of ACK's goodness. Sorcerer-Queen Semiramis could become a straight up villainess of epic proportions within her own right to the back drop of the PC's rule with their own ACK's campaign.

AX6: Sepulcher of the Sorceress-Queen  does a good job setting up its own inter universe adventure logic & sticking with it. This adventure owes more to Robert E. Howard's Conan then it does real world history. But it does it in a slick & solid package that rises to the usual level of ACK's products. The cartography is well done, the layout is good, the plot of the dungeon is well thought out but its placement?! I've got some 'suggestions' on that.

But where does one place AX6: Sepulcher of the Sorceress-Queen  in the campaign setting of ACK's?! Well there's the official explanation  which dives it right into the world setting of  the Auran Empire found within The Auran Empire Primer . And then there's my personal take on AX6: Sepulcher of the Sorceress-Queen . Take this adventure & throw it whole hog into Barbarian Conquerors of Kanahu world setting.