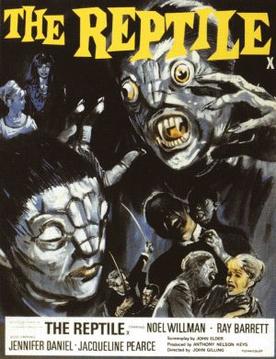 Last night I got caught up with one of the family's all time favorite Hammer films the 1966 film 'The Reptile'. This sixty six production has a bit of everything for the connisueur of the serpent men. You've got snake cults luring in the background, strange black magick curses, and more. But the 'The Reptile' while well known in Hammer horror fan circles doesn't have that much of an audience among the D&D minded.
Here's the low down according to the wiki page; "The Reptile is a 1966 horror film made by Hammer Film Productions. It was directed by John Gilling, and starred Noel Willman, Jacqueline Pearce, Ray Barrett, Jennifer Daniel, and Michael Ripper."

The plot is straight outta of the classic Hammer horror bag & its not surprising because this film is from the golden age of grand production house of Gothic horror; "At the turn of the 20th century in the fictional village of Clagmoor Heath in Cornwall several locals are dying from what is deemed to be the "Black Death". Harry Spalding (Ray Barrett) inherits his late brother's cottage and arrives with his new bride, Valerie (Jennifer Daniel) . The inhabitants of the village keep clear of the newly arrived couple and only the publican, Tom Bailey (Michael Ripper), befriends them. Bailey explains that the hostility exhibited by the townspeople is the result of many mysterious deaths in the community.

The sinister Dr. Franklyn (Noel Willman), the owner of the nearby Well House, is the only resident in the vicinity of the cottage and he lives with his daughter Anna (Jacqueline Pearce). The Doctor treats his daughter with cruel contempt and she is attended by a silent Malay servant (Marne Maitland).

Hoping to learn something of the deaths, Harry invites the local eccentric, Mad Peter (John Laurie), home for dinner. After warning them that their lives are in danger, Mad Peter quickly departs only to return later that evening foaming at the mouth, with his face blackened and swollen. He dies within a few minutes. The Spaldings attempt to alert Dr. Franklyn, but Franklyn arrogantly states that Peter's death is not his concern, explaining that he is a Doctor of Divinity, not a surgeon.

In an attempt to help Harry clear up the mystery, Tom Bailey illegally unearths Mad Peter's corpse and discovers a strange neck wound like a snake bite. Harry and Tom dig up the coffin of Harry's dead brother, Charles, and find that corpse also has those same strange marks. Realizing that they are threatened by something far worse than they had ever imagined, Harry is quick to answer an urgent message from the Well House. There he is bitten by a mysterious reptilian creature, but he still manages to return to his home and recover from the bite.

Meanwhile, at the eerie abode, Valerie witnesses Dr. Franklyn's attempt to kill his own cursed daughter (who was changed into the reptile creature after being abducted by a Malay snake cult that included the doctor's own servant). She also witnesses a fierce struggle between the doctor and the deranged Malay servant. During the battle, a lantern is overturned and Dr. Franklyn is bitten by the venomous fangs of his reptilian daughter. Both the doctor and the reptile die in the fire and the Well House crumbles in flames, with Harry and Valerie fleeing for their lives."


There are so many questions about 'The Reptile' but let's take it up with  the fictional village of Clagmoor Heath in Cornwall. Why would the Malay serpent men cultists be drawn to this dreary location in the middle of a Nineteenth century England. That I can answer right away with Robert E. Howard's 1932 novella 'The Worms of the Earth'. Personally I think that the village might be one of the last remains of the serpent men's seats of power;"The seat of the First Empire of the Serpent People, during the Paleozoic era, is Valusia. Valusia is a fictional country in the Kull stories of Robert E. Howard and his stories tell, among other things, of the Serpent Men trying to conquer the world once again, around 20,000 years ago, where Kull from Atlantis reigned over the Valusia Kingdom, located on the west coast of the main continent of Thuria." 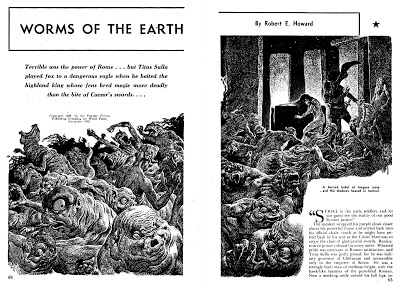 The worms of the Earth might be related to an earlier modern descendants of the Serpent People from  Robert E. Howard's Children of the Night. These things are described in the story thus;"

As Aryara, O'Donnel describes the Children of the Night as:

Humans they were, of a sort, though I did not consider them so. They were short and stocky, with broad heads too large for their scrawny bodies. Their hair was snaky and stringy, their faces broad and square, with flat noses, hideously slanted eyes, a thin gash for a mouth, and pointed ears. They wore the skins of beasts, as did I, but these hides were but crudely dressed. They bore small bows and flint-tipped arrows, flint knives and cudgels. And they conversed in a speech as hideous as themselves, a hissing, reptilian speech that filled me with dread and loathing.

They are frequently described as snakes or having snake-like qualities. The Aryan legends say that the Children—none of the Aryans know what they call themselves—used to own the land in an ancient "outworn age" until they were hunted and driven underground by the Picts."

The connection to Arthur Machen's The Novel of the Black Seal is obvious for any Appendix N aficionado..Going into the Xoth D20 Conan & Kiss of the Spider God's site I found this  Miller and Clark's map showing the world of Hyboria superimposed over the continent of modern Europe.

If the Picts in Howard's works are the survivors of Atlantis then they have racial memories of Kull's time. The human villager's  reaction of utter disgust from 'The Reptile' bares this out. What was the plan of the Malay serpent men cultists in 'The Reptile'?! That's easy it was re population of true serpent people by the transplanting of the soul of a serpent men queen into the body of Dr. Franklyn's daughter. Kill off the villagers, lay eggs, & replace the villagers right in the seat of the once mighty empire of their enemies The Picts. 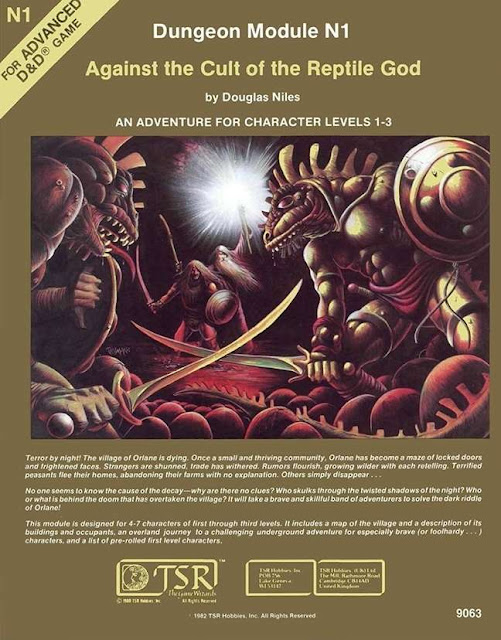 In fact change the lizard men for serpent men & swap out the locations of 'The Reptile'  & add in a Peter Cushing style character plus the party of adventurers. 'The Reptile' could become a Robert E. Howard side quest for an English style OSR Hammer horror campaign. The Doctor & his cursed daughter might live.  "Against The Cult of the Reptile God" (1982), by Douglas Niles could become the first salvo in the planned return of a full on serpent men invasion. But we'll get into that coming up.
Posted by Needles at 9:06 AM

Email ThisBlogThis!Share to TwitterShare to FacebookShare to Pinterest
Labels: Douglas Niles, Hammer Movies, N1 Against the Cult of the Reptile God, Robert E.Howard