Today I'm going to be examining one of my favorite pre code Nineteen Forty Nine sword and sorcery obscure titles Slave Girl Comics. Slave Girl Comics has had a rather infamous and not well deserved reputation among comic book aficionados. According to Wiki Slave Girl comics  was a series published by Avon Publications that lasted for two issues. It detailed the adventures of Malu, the titular slave girl.

GRAB IT RIGHT OVER  HERE  Or From Wiki Source HERE 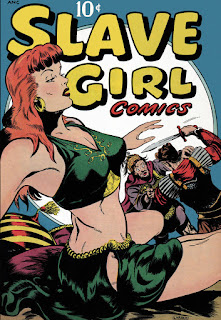 Avon Publications was a paperback book and comic book publisher. It today exists only as an imprint of HarperCollins.
Avon Books was founded in 1941 by the American News Corporation to create a rival to Pocket Books. They hired Joseph and Edna Meyers to establish the company. They bought out J.S. Ogilvie Publications, a pulp magazine publisher, and renamed it “Avon Publications.” They also got into comic books.
From at least 1945 through the mid-1950s, Avon published comic books. Its titles included horror fiction, science fiction, Westerns, romance comics, war comics and funny-animal comics.
So what does this have to do with old school campaigning? A lot actually in the fact that this title is a public domain resource for sword and sorcery gaming that allows a DM to use this title in very interesting ways. 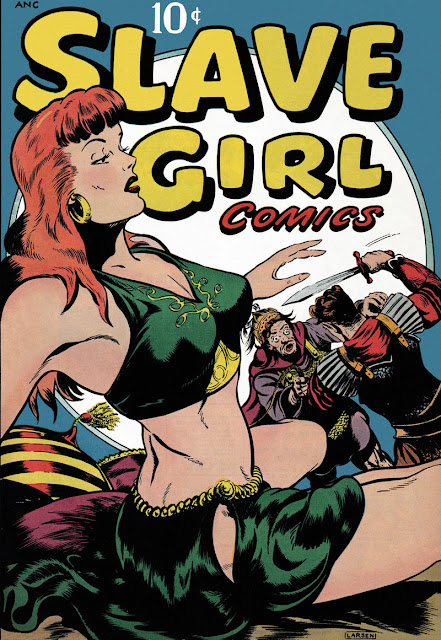 If your expecting mature or risky themes from this public domain comic book forgot it straight up you'll get more mature and BDSM themes in an early Wonder Woman comic book issue. Instead this is a straight up low level magick sword and sorcery setting. We've got wall to wall good girl artwork and its pretty tame by today's standards really. What you get are the adventures of SandraWorth
& her soon to be boy friend archaeologist Geoffrey Garth. Mr. Garth has been searching for the mystic ring of Zubran and the Worth family have been passing it down through the family lines for generations. 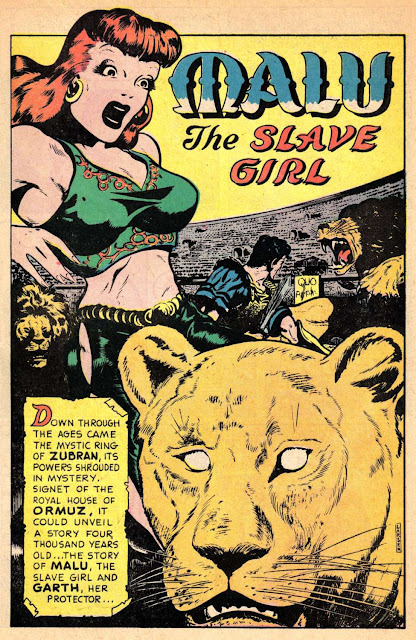 They go back to Sandra's place and with a mystic invocation provided by Geoffrey the paths into the mystic past are revealed by the guardian spirits of the kingdom of Ormuz. Sandra is in psychic rapture with her ancestor and the mystic past of this forgotten age is revealed in the adventures of Malu a slave girl held with in the kingdom of  Tarko. Note that Malu isn't alone and has a very potent protector in the form of Garth a former city watchman and warrior. They met in capital of Tarko and escape after being almost eaten by lions one of the very interesting things about this series is the fact that the various kingdoms,exotic locals, and settings all have a strange Hollywood sort of Roman Empire level of technology throughout right down to Garth's stolen armors that he wears. Another fact is that Garth actually get's better at fighting I'd say that in the beginning of the series Garth is a 2nd level fighter with some skills at tactician but by the end of the second issue he's about 5th or so. His skills and subterfuge at tactics are pretty impressive by the second issue. But what about Malu herself? She's a perfect example of a Houri in action in this series of comics. She can actually take care of herself in various parlous situations and saves Garth her "protector" more then once. 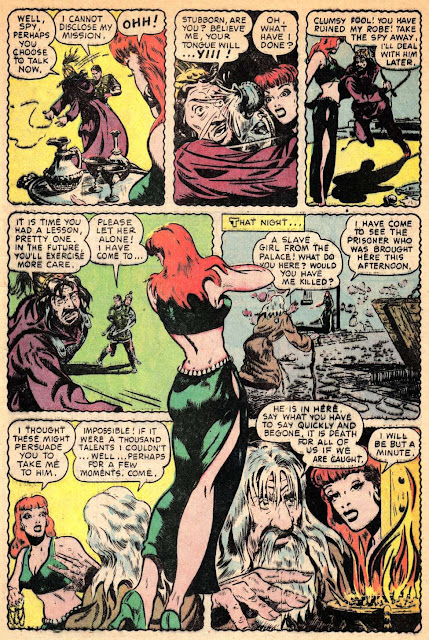 Another interesting aspect about this series is the lost kingdom and politics of Ormuz which is actually driving this series. Malu is actually princess and not unlike Dejah Thoris there's a lot of political intrigue driving these two characters on. Malu reminds me of Annora and Saffron from the Firefly TV series. Her abilities grow as these two characters go about wrecking a number of kingdoms. They remind me of PC's in various games I've run. Malu herself is a forth or so level Houri by the time of the second issue's end. She's capable and more then slightly dangerous if provoked. She also seems quite sure of herself by the second issue. Something will get into in a future entry. 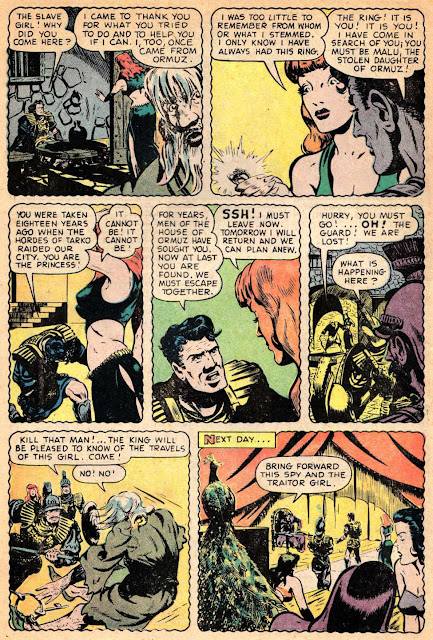 The Ring of Zubran  is a great plot device that connects both 1949 and the lost era of Malu and co. The ring is central to both the plot and ties the romance of Malu & Garth as well as Sandra Worth & Geoffrey Garth together. The magical artifact is  a great gimmick for dealing with tying two desperate campaign world settings  or eras together something that was used to great effect in the Keep Adventure from Mayfair games. 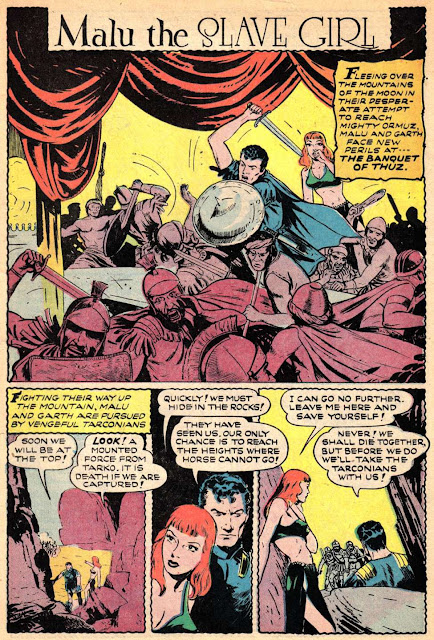 Thuz is another petty dictator they run into this issue who rules in the stead of a boy king of twelve. Of course he wants Malu for his own and a slave revolt later their on their way out of the kingdom. There's a two page page breaker story with a vile villain getting his just deserts which might actually be used as a hook for a modern side adventure but its nothing compared with the second part of Malu's continuing journey. When Malu The Slave Girl encounters The Bandits of Tal Azmut! 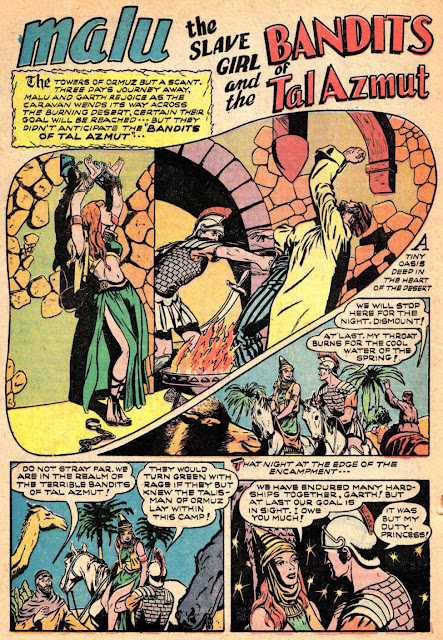 Malu gets kidnapped after Garth of course sticks his foot in it instead of tell her he loves her. Very typical stuff for this sort of story but what really shines through here is the mini dungeon of the bandits who kidnap Malu. Evil idols, secret passages, a band of 1st level bandits to beat on,etc. That's one of the other things I really love about these books, so much to mine for OD&D, Astonishing Swordsmen and Sorcerers of Hyperborea or other retroclone games. 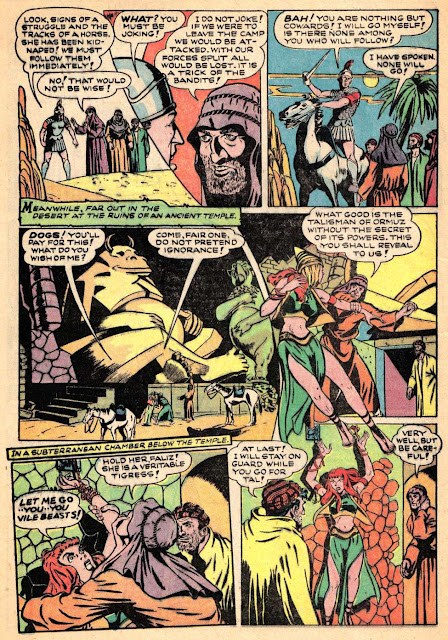 There's a  ton going on here as the bandits of Tal Azmut's lair! Weird cult activities, slaving, and much more all this going on right under the golden Bovian idol. The ruins are the bandits headquarters with an array of rooms, a small dungeon and a stable. 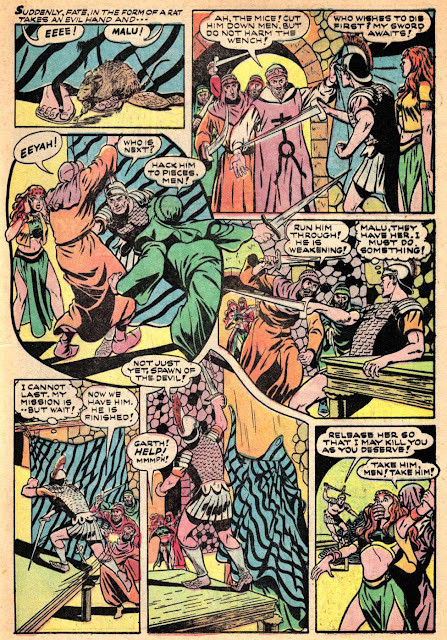 I've used these thieves, slavers, and kidnappers a couple of times and each time players go nuts to kill as many as these guys as they can. Tal Azmut is the leader of these desert NPC's. Tal Azmut is a forth level thief, his men are about 1st level fighters with maybe a smattering of 2nd levels as gang leaders
The Devil Bovine of The Desert Cult

Name - Brearu'i, God of Desert Thieves, Slavers, and Kidnappers
Symbol: A double cross with circle at the bottom and a squiggled line through the circle
Alignment : Chaotic
Hit Dice Hit Points : 90 (20)
Attacks: Hand Slap, Gore, Eye Beams
Damage: 1d4 Claws and Hand Slap, Gore 1d8, Eye Beams 1d10
Save:F20
Morale 10
Hoard Class: XX In the Ancient Temple of Brearu'i
Brearu'i was an ancient god of a lost desert city kingdom near its rival Ormuz along with Rrari The Desert Parrot Hawk. Brearu'i was a mutated Minotaur/bovine  like humanoid of massive girth who originally was a god of planting and the harvest that mutated and grew twisted as its influence declined. Not content to return from the dust of mythology and legend.  Brearu'i attracted deep wasteland scum and thieves with promises of riches and fortune. The god attracted quite a following in the form of the desert scum and outlaws from Ormuz. Tal Azmut became the latest in a succession of mercenary priests for the bovine god. Travelers are robbed,kidnapped  and sacrificed to the life like humanoid idol at the heart of the bandits headquarters. The massive golden statue isn't a statue at all but a god that feeds off of its victims flesh and terror. Brearu'i is able to cast clerical spells at fifteenth level and attack with its massive clawed hands that it slaps victims with beating them to a bloody pulp.Often this being becomes so taken with its victims that it will gore them for 1d8 points of blood soaked damage. The alien god always seems to be almost sleeping but its massive alien crystal eyes can open and blast a victim with soul searing chaotic energies.  The alien bovine god has massive crystal eyes that see all and teach evil methods of thievery to its followers telepathically. It demands blood,treasure and sacrifices in equal for its favors. Most of the time it sleeps but stokes the fires against Ormuz in its followers hearts. 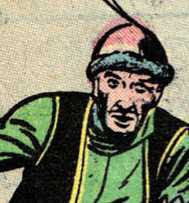 We get our first real look at the kingdom of Ormuz and its capital city in this chapter;and the slave markets of Manoch. Here we get a glimpse of this issue's real baddie in the form of the Mighty Phao. 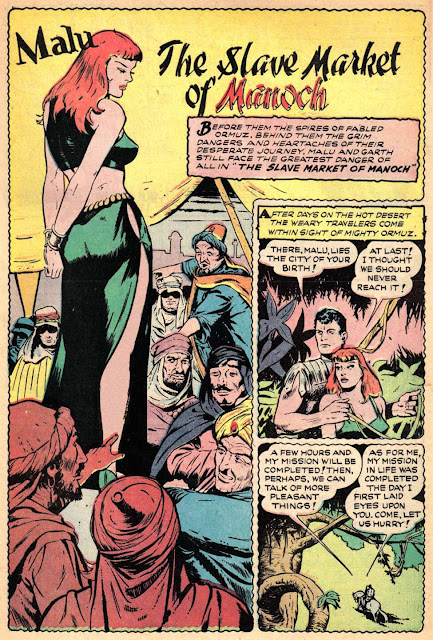 Once again our two star crossed lovers are separated Ormuz is revealed to be a kingdom rife with political intrigue and vast dungeons. Garth escapes and manages to get Malu at the auction but Phao is there to throw a monkey wrench into the works as Garth tries to get Malu on the throne and in her father the king's arms. 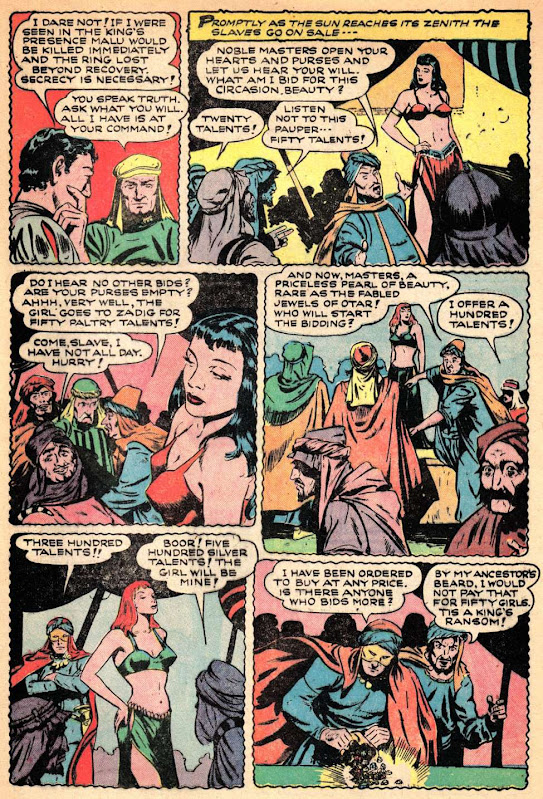 Phao is an eighth level thief but a dyed in the wool coward of the highest degree. He's a snake of the first order and could make PC's lives hell when visiting Ormuz or its ports.Brother of the King of Ormuz and heir to the thrown, if he can get rid of Malu. 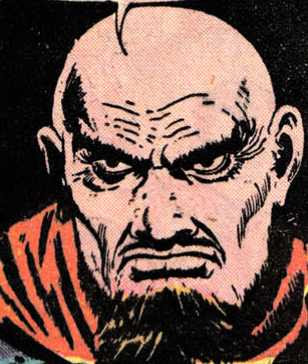 There is some speculation that the kingdom of Ormuz and the surrounding lands were a part of the Atlantian colonies that existed shortly in the prehistory before the oceans drank Atlantis. There have been many legends surrounding these lands and their dangerous monsters. Ormuz was once a center of trade and learning but time has allowed it to slide into decline and decedence none the less it remains a vital kingdom along with its rival states that surround it. Ormuz and its lesser rivals are all dependent on a series of aquifers and water works that were set up by the Ancients. This has caused the kingdoms to exist in a state of cold war for centuries while the desert rabble and scum play off each kingdom against one another and wage proxy warfare for these kingdoms in the shadows. Thieves adventurers and bandits use these shadow wars as covert cover for their own activities carving out their own niches against the backdrop of kingdom intrigue.

Closing Commentary Slave Girl Comics Issue #1 is a resource that I've been using for years with minor kingdoms and political intrigue against a sword and sorcery backdrop. The magic here is minor but the political stakes are very high. Garth and Malu have appeared in a number of my campaigns and players have learned to leave town when their around. For Astonishing Swordsmen and Sorcerers of Hyperborea they're tailor made to throw a bit of a flare and chaos to a game. Certain PC's have ended up working for Garth a couple of times.
Ormuz and its rival states have been a part of my Accursed Atlantis campaign for the better part of two years now providing endless headaches for various PC's. As I said this is only the first issue.
Posted by Needles at 2:42 PM