Sand Rats 'The Invasive Pests' For Your Old School Campaigns

Nasty, dangerous, and completely ready to finish off anything that comes into their clawed and fanged purview. The sand rat is found throughout many different world,a pest of a bygone age when Atlantis might war fleets sailed the deepest depths of space and these little four foot tall horrors stowed away aboard the mighty void ships. Sand Rats are   a degenerate species of nasty and dangerous xenophobic and hate filled aliens. They lost their planetary empire decades ago & now have spread throughout the planes.  Sand Rats worship any number of chaotic gods & degenerate Lovecraftian entities. 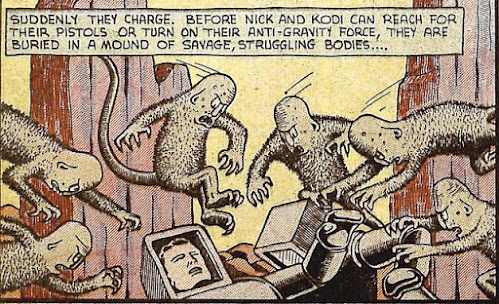 Sand Rats
Frequency: Uncommon
No appearing: 1- d100
Armor Class: 6
Move:10
Dex:8
Hit Dice: 5+5
%In Lair: 30%
Treasure Type: Y
No of Attacks:4
Damage: 1-4X3,2-8 bite plus acid damage
Special Attacks: +3 acidic bite
Special Defenses: -
Magic Resistance: Standard
Intelligence: Average
Alignment: Chaotic
Size: M
Psionic Ability: -
Attack/Defense:-
Experience: 1000 each
They are territorial horrors who will work them selves into hate filled mobs of incredible violence.  They attack adventurers en mass to claw,bite, and rip apart anyone or anything venturing into their lands. The sand rat pack can exist in a wide variety of worlds and adapt to many different atmospheric combinations. They attack just about anything or anyone regardless of intent. These creature's rubbery bodies protect them from falls, small arms fire, and some bladed weapons. These horrors crawl all over everything and cause untold damage to anything they can get their sharp claws onto. They have a highly acidic bite that adds +3 to all damage rolls enabling them to break down non organic materials when 'fresh meat' isn't around.
The sand rat frequently infests ruins, old barracks, Atlantian military bases, and think of all they survey as their own. They have a love of shiny relics and treasures, sometimes using gems and jewels to decorate their complex tunnel systems amid ruins & dungeons.
They hate all  intruders and have  been known to gather several packs together to bring down superior forces. The sand rat is far too clever to attack mecha, heavily  armed  and armored foes. And use a variety of pack tactics and mob style ambushes to box in and separate parties of adventurers.  Sand rats love to leave behind the remains of  space armor, mecha, etc. as trophies for other adventurers & salvagers to run across. A swarm of d100 sand rats will then attack the fools biting air hoses, clawing at face masks, & cutting anything on an adventurer that looks vital.
Other areas of sand rat infestations have their ruins, space dungeons, & other areas swept clean of any debris to attract adventurers. There is a bounty on space rates of 1d20 gold pieces per rat in many space ports. Several alchemist's cabals will pay good money for space rat carcasses because of the powerful stomach acids of space rats can be used to make space craft bulk head cleaners. These alchemists will pay 5 gold pieces for an intact space rat corpse. The space rat acidic cleaner does 1d6 points of damage to any surface its put on & sells for 1d10 gold pieces for a glass vial.
Space rats have been found in very odd planar places such as the further reaches of the 'Lovecraftian Realms' & the planes of Giger. Sand Rats are of a low deviously evil  intelligence, dangerous, & make highly effective guards for unholy temples & shrines. Therefore brain lashers & many lower tier Lovercraftian races use them as guards.
Posted by Needles at 8:20 AM