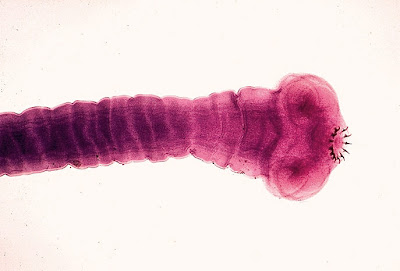 Frequency: Rare No. Enc.: 1d6Alignment:InimicalMove: 120'(40’)Armor Class: 6
Intelligence: NilHit Dice: 3Attacks: 1Damage: 1d4 (plus special)Morale: 6
Size: Small to Medium
Psionic ability:Nil
Attack/Defense modes:-
A parasitic worm often found between the eddies of subspace where they lurk waiting for a passing object to move through. These vile creatures exist in at least 4 different planes of existence at the same moment. The minute that they detect a ship or traveler moving through their strange angles of subspace they are drawn to the life energy of the target. The victim must make a  saving throw vs poison or fall over unconscious as the parasite begins to feed on the life force of the victim. More parasites will be called to the feast as the victim's life ebbs away from the star fish like feeding mechanism of the parasite. Seen with the naked astral eye the parasite looks like a cross between an overly large star fish & a dead flat worm left in slime for a time. These creatures are often found in the war torn ruins of space battles. Sometimes an egg packet of a macro parasite is left behind in hyper space or the astral plane. These eggs will attach themselves to a host if the host doesn't save vs death. The eggs will burst from the host's stomach in a splattering of 1d6 planar macro larval. The macro planar parasite is often  drawn to the quantum flux of hyperspace jumps & faster then light drive leavings. A 'cure light wounds' spell will stop an infection of these creatures if the eggs are caught early enough.Usually within the first 1d4 days of initial infection.
Only medical super science can overcome a late stage  infection of these creatures. They are often seen growing to about a 2 foot length after a recent feeding. These creatures can be summoned to the prime plane by a standard summon monster spell if the black magus uses the inverted Voorish sign. Black magus often summon a small swarm of planar macro parasites to make the 'black wine of the void' from the pickled remains of these least demonlettes. The black wine can be drunk & a save vs poison must be made failure & the magus's mind floats in the black void between realities for 1d4 months. Success & the magus may merge with a non sanity shattering aspect  his or her demonic or infernal god head there by gaining 1d5 spells that can be slotted at anytime.
If the fool is under the influence of a blank cyberspell  while drinking the wine he or she can create a spell scroll regardless of level through self possession &  automatic writing. This is not without danger as these scrolls often have 'keys of the damned' woven into them. Random demonic summonings have occurred when these spells are read or cast. But this is chance the magus takes when the black wine is drunk & the rites of the planar macro parasites are used.
Posted by Needles at 9:37 AM