George Pal's 'The Time Machine' is for me a film that is both timeless & a source of so much inspiration. Its beyond iconic for me as a fan of science fiction or at this point science fantasy. The original blog post was from 2013 & my finance shares my passion for this film. It was her that grabbed me this DVD copy. There's now an extensive bluray that's since come out and its the definitive version. I'll review that coming up but here's the original blog entry from December 1st 2013 with some additional annotations.

Tempus Fugit, times flies and don't I know it. This past Thanksgiving holiday I was blessed to spend a week with my fiance. She brought me a gift in the form of a copy of one of the my most beloved movies, George Pal's Time Machine. As I write these words she's back in London and I'm sitting here writing about this film.
Here's some basic information on the film from Wiki :
A 1960 science fiction film based on the 1895 novel of the same name by H. G. Wells in which a man from Victorian England constructs a time-travelling machine which he uses to travel to the future. The film stars Rod Taylor, Yvette Mimieux and Alan Young. 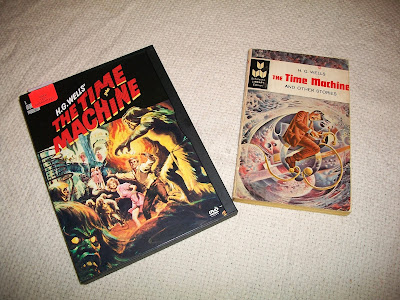 George Pal's  "The Time Machine" came out in 1960 to theaters but I saw it in 1980 on Channel 11 out of New York on the Million Dollar movie over my grand parents house on cable and became fascinated with time travel, H.G. Wells and all things George Pal. It was also the movie that got me to read the paper back that my father had given me back in 1975 when I was five years old.
This a used DVD from Warner Brother that comes with a digitally remastered copy of the Time Machine as well as the Dolby remixed stereo sound, and with the
comes with the 1993 behind the scenes documentary "The Time Machine The Journey Back" which made this package worth the price of admission right there.  This behind the scenes film stars Rod Tailor, Alan Young, Whit Bissell and many others. 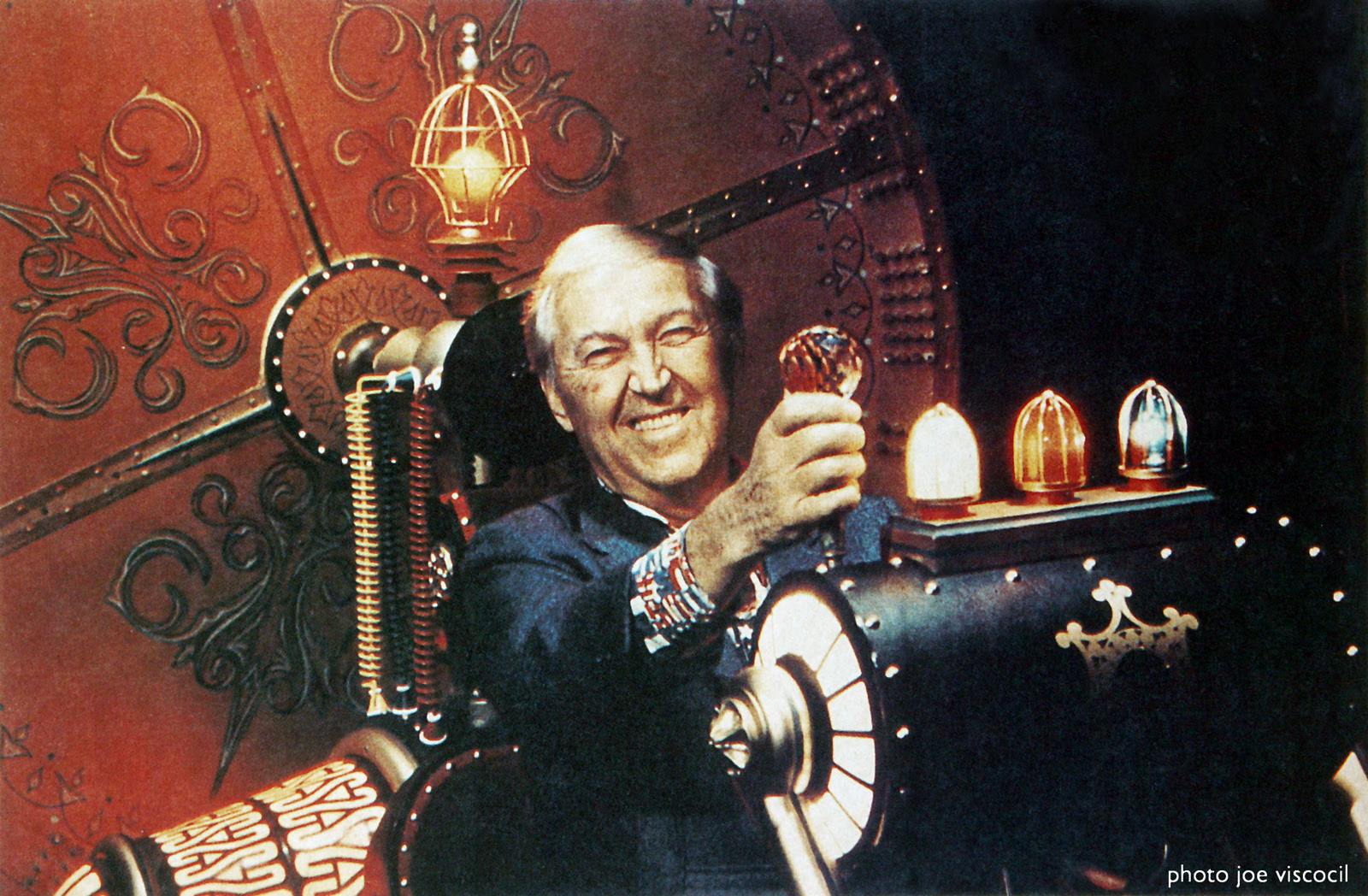 According to the Wiki Entry on The Time Machine The Journey Back:
It was hosted by Rod Taylorand produced and directed by Clyde Lucas. The film was made about the Time Machine prop, not the movie, but during filming, Bob Burns surprised director Clyde Lucas by having Gene Warren, Sr. drop by. Warren, the award winning effects creator for the original movie, consented to an on-air in which he discussed creating the special effects for the film. This led to an with one of Warren's partners, Wah Chang, in Northern California. Chang and Warren shared more details about creating the effects and how the little Time Machine prop was made.
Lucas contacted the original screenwriter, David Duncan, who agreed to write a mini-sequel to George Pal's film. The mini-sequel reunited George (Rod Taylor) with Filby (Alan Young). Lucas first filmed Whit Bissell for the opening, recreating his role as Walter. It would be Bissell's last acting performance.
The film won a Saturn Award and a Telly Award. It was included as a "special feature" on the DVD for George Pal's film The Time Machine, released by Warner Bros. and was featured in Starlog Magazine.
You can find out more right at the series official site
HERE
The packaging is kitsch and garishly coloured as those wonderful 60's movie posters. The book sitting next to the DVD is featured in the documentary on the movie. I haven't seen the movie in over a year and I do confess that there were scenes in it that I had not remember seeing.
The artifact rings featured in the movie are one of them. Another was 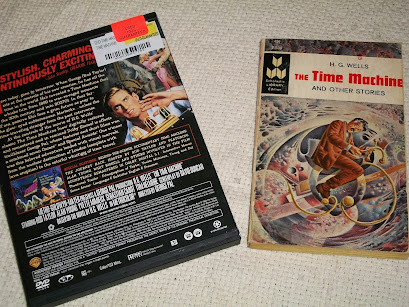 The Atomic wars of 1966 places the film in an alternative universe timeline and there is so much of the magic in the movie it really takes me back. The restored version is much crisper to the versions I've seen on VHS over the years. Pal really seems to hit the highlights of the Wells novel but definitely puts his own stamp on the cocepts. All in All I was quite pleased with the menus and the behind the scenes documentary. Its a really lovely package and if you haven't got it I recommend picking it up. 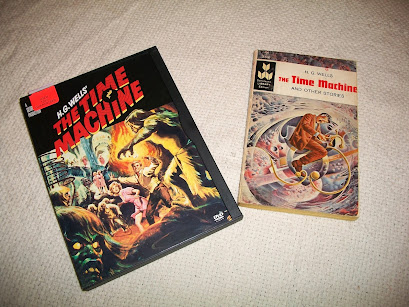 One thing that I did notice was the attention to detail that Warner Brothers put into this one. You see its almost as if the graphics department 'got it' on this one!
The interior of the DVD features some great artwork as well. 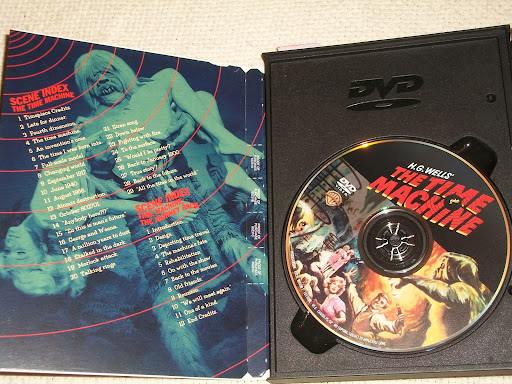 One part that I didn't remember were the 'Talking Rings'artifacts. These things would make a great inclusion in post apocalyptic campaign or a D&D science fantasy campaign
Using HG Wells Time Machine For Your Old School
Campaigns 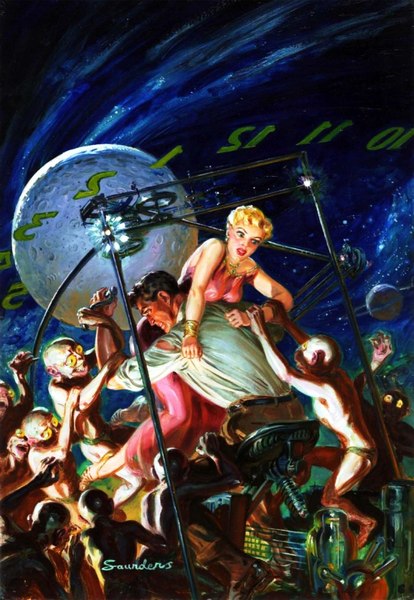 Artwork Saunders 1946
You can download HG Wells The Time Machine
HERE
For me George Pal's Time Machine and HG Wells have always been interwoven. The Morlocks have been a part of my gaming since I first started OD&D back in 1977. The Eloi and Morlock dynamic of technology cannibalism has also smacked of post apocalyptic gaming as well.
The film places itself squarely in an alternative universe with the on set of the Atomic Wars of the 1960's. These were a series of protracted wars stemming from a failed economic and political recover after 1945 as it spun into the post war years of the 50's and 60's.
There are many retroclone games which use the Morlocks these days. Mutant Future and Labyrinth Lord have profiles on the beasts.
The Morlocks have always smacked of Lovecraftian degeneration and weirdness. They've appeared in Call of Cthulhu and various Mythos related products as well. I've always felt that the  Timer Machine by Wells was a great sequel to the Nightlands by William Hope Hodgeson. Hodgeson's book has always seemed to be the future of the Morlocks and Eloi. A place where the Great Old Ones have risen and man's evolution has been tainted by the inheritance of the Outer Gods. The doorway was opened by the Morlocks and hell on Earth has resulted as the entire human race becomes one degenerate evolutionary nightmare as madness and mutation run wild. 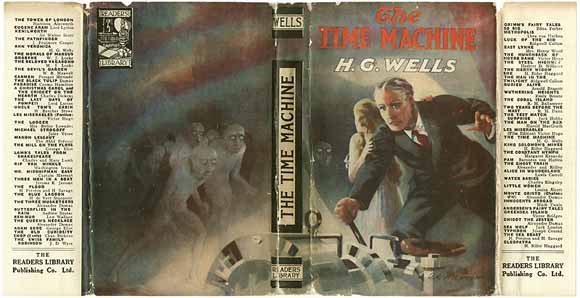 The trappings here are almost in the realm of the Gothic novel rather then the science fiction romances of Wells.  A rather useful article called TIME MACHINES GO BOTH WAYS available right HERE.
Many of these ideas were incorporated into a meta campaign using elements from many of the retroclones and Hodgeson's Nightlands. Much of the material also incorporated some of the elements from the Mutant Future Wiki articles on the Eloi.
Here
The Eloi have always bothered me in a way. They almost appear to be the too perfect product. Prepacked, pretty, and generally the perfect stock animal.This indicated genetic or artificial evolution.  When the Mutant Future article on The Morlocks hit it became clear both races did not evolve but were rather made.Read HERE
So who created them and why is this biological dynamic in play? I've had PC's encounter isolated Eloi & Morlock subterranean domes ala Logan's Run. The PC's were surprised to find them worshiping the Great Old Ones.
The Morlocks have also appeared as enemies of the Derro from "I Remember Lemuria" competing for Eloi food stocks and human villages. The PC's were trying to recover artifacts from both races while avoid being killed at the same time.
Many of the buildings, ruins, and land marks are easily adaptable to any number of retroclones and once again remind me of the Last Redoubt from The Night Lands.
George Pal's wonderful film remains an incredible achievement and he always wanted to direct a squeal but died before it could be completed. 'The Time Machine The Journey Back' remains about as close as we're going to get.
Get the DVD if its not already in your collection.
This blog post is dedicated to my fiancee who not only encourages my hobby but continues to inspire me every day.
Posted by Needles at 7:31 AM