There are lone lost world settings that your PC's stumble upon and their perfect for pulpy mini campaigns but why?

So over the last couple of months I've been rereading old classic TSR modules and various OSR adventures including the recent World of the Lost From Rafael Chandler and the Lamentations of the Flame Princess rpg line. Right but then I started thinking about some of the classic Advanced Dungeons and Dragons modules especially C1  The Hidden Shrine of Tamoachan & I1 Dwellers of The Forbidden City. Both of these modules over the years I've seen sewn together to form an over arching lost world jungle. Something that occurs to me is how these adventures each could be used as a part of a mini lost world campaign.
These two modules back to back are deadly and very dangerous to one another but whose maintaining those ruins, traps, etc in both modules?  In world of the lost we get a glimpse of a campaign mechanism that helps to maintain the world of Khirima's adventure materials. And yes I understand that it takes place in a fantasy Nigeria that  the C1 I1 take place in a faux South American lost world setting but as we shall see there are parallels. Both adventures have incredibly expansive ruins that can be linked up to form a super mini campaign setting but when some fool stumbles upon these places whose maintaining the ruins, resetting the traps, and why are they doing this? 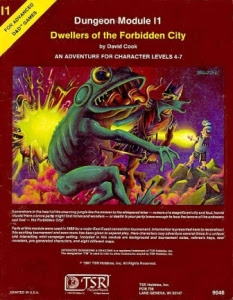 If Dwellers in the Forbidden City and Lost Caverns of Tsojcanth then we start to get our answer, its precisely the same sort of setting conceit that we see in the Raiders of the Lost Ark. The Hovitos are a South American  tribe who are descended from the Chachapoyans who came to house their golden Earth mother statue within that elaborate temple. A temple that was maintained for generations and reset. Add in the various factions of the  various power groups and factions within the city, namely the bugbears, mongrelmen, and bullywugs, add to this a boat load of human tribes in both modules and suddenly that jungle is going to be very busy indeed. This brings me to the micro setting aspect. Both of these modules have another commonality with many of the OSR modules we've seen recently. Namely the fact that married together they can be used to create a mini campaign that could go for months. 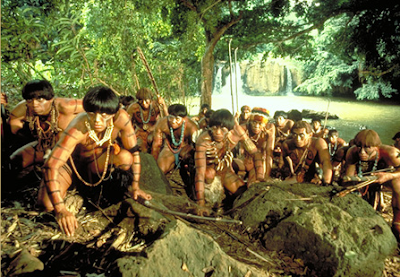 Oh for the record don't screw with the Hovitos you will die with lots of poison arrows, and blow gun darts hanging from your PC's. Back to what I was saying many of the faux deities of these modules serve many of the same purposes as the gods in World of the Lost. A safety valve of control over aspects of tribal life and one that PC's might want to think twice about disturbing. Many times the destruction of petty gods or deities is a perfect time for DM's to set NPC assassins and warriors to punish the offenders. A tactic that often times seems to get ignored. World of the Lost presents a very dangerous option in the form of warrior women armed with high tech death tools of the gods should the need arise for the dungeon master. 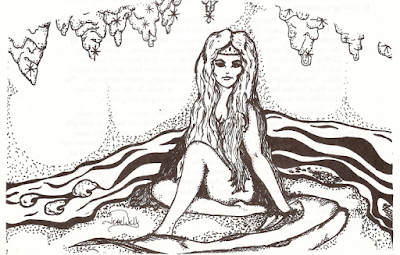 The other parell between these various lost worlds is the placement of them, the dungeon master has a further option by deciding if he or she wants to make these locations other worldly or simply another lost world location to be exploited. After reading through various modules and pouring over a few OSR articles on the subject. 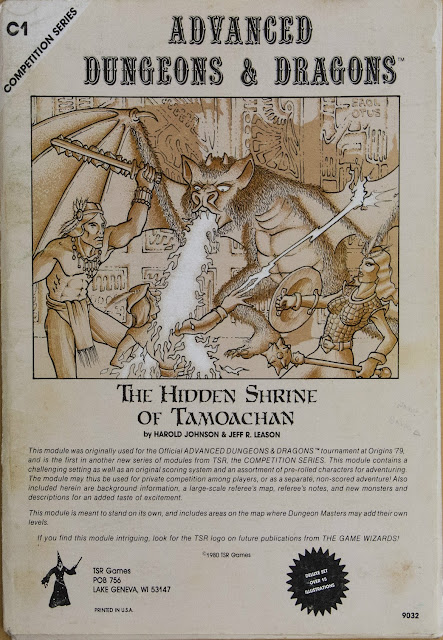 I've come to the foregone conclusion of using both options at the table that is the idea of a lost world location that exists extra dimensional but at times impinges on the 'real world' of the campaign drifting into myth and legends of the locals and that can act as another PC sword and sorcery hook to rope them into more adventure. The pseudo African setting of World of the Lost dovetails into a whole sub realm of lost world African legends with dinosaurs and all kinds of high end mythology even crossing over into the ancient gods and UFO mythologies. A fertile ground to plan the next series of death traps and adventures, using a variety of both OSR and old school options DM's have fodder for seven or eight micro campaigns or mini campaigns as they see fit. 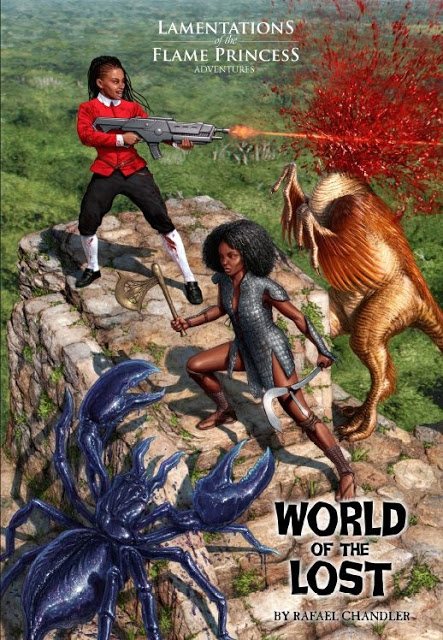 This sort of approach of using a limited number of campaign resources allows the DM to save time, energy, and playing time by focusing his or her energies upon the setting, adventures, and campaign motives while maximizing their approach to the role playing material. This gives both the players the best over all playing experience and takes some of the stress off of the DM so they can concentrate on important things like where the PC's might get killed and where the links are to other adventure and campaign elements.
Posted by Needles at 12:42 PM