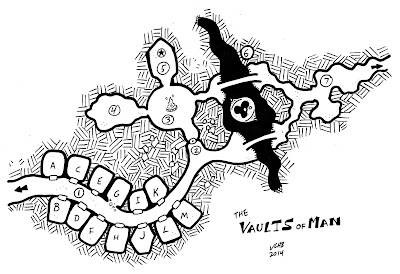 Bernie the Flumph is a great little blog by Josh Burnett whose done a really nice adventure location for Geoffrey McKinney’s Carcosa. Its got a really nice creepy feel to it and adds more bits and pieces to the setting for a DM to use.
There are plenty of mini encounters, high Carcosian weirdness, a quick bit of adventure location action, and more.
According to the author:
" The Vaults of Man is a short little adventure location that can be dropped just about anywhere in Carcosa. It was designed to give the PCs a chance to find some weird things, fight some goopy monsters, suffer some traps, and maybe get a bit of treasure."It succeeds in its mission in spades. There's a solid vibe of old school pulp here but there is a quick note about the location :


The author weaves in a nice series of bits of Carcosa based details that bring this location home and add in a bit of fun for the setting. Its nice to see a semi stable location while maintaining the Lovecraft vibe isn't going to simply gut the PC's as soon as they enter the spiraling series of encounters and ideas presented in 'The Vaults of Man'.
There's a a nice sense of fun with this product and it adds just that wee bit of Lovecraftian creepiness to the mix for old school gaming and Carcosa. Don't miss this one. There's plenty of mini locations and bits to the mix here for Carcosa. So check it out and grab some friends for a bit of that old school science fantasy action within the bounds of Carcosa. 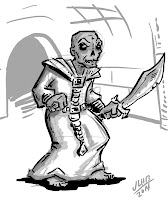