There are times when adventurers will encounter the ancient artifices and former toys of mankind out in the wastes. Some of these encounter can be beneficial  and others deadly. Recently this random encounter chart got a workout in my Post Apocalypse Mars campaign
I've kept these encounters system neutral for use in a variety of rpg and retro clone systems.
1d10 Random Robotic Encounters From The Scrap Heap 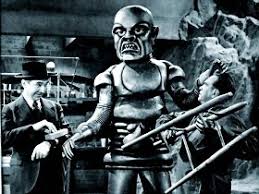