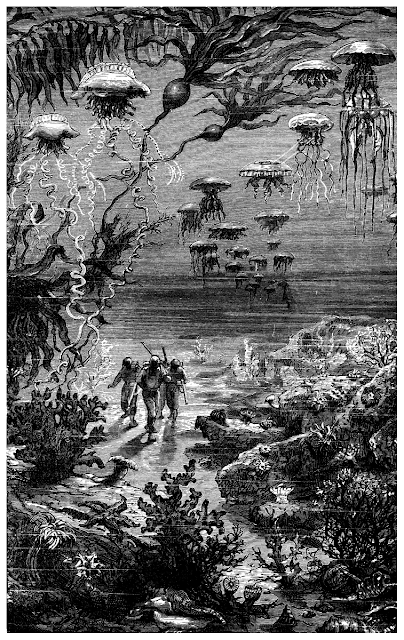 Sunk 20,000 miles into the Martian soil and planet mantle is the alien created artificial sea the Ocean Pit Vuul Hru. Found over fifty years ago after an Old Earther survey mission. The Ocean Pit Vuul Hru was artificially constructed using a dimensional gate to  the Elemental plane of Water but regulated by a series of quantum shunts to control the flow of water and limit the intake of the flow. The project was massive but the results incredible.
Populated by an extensive biosphere of incredibly diverse alien and mutant life forms this ecological system has been the site of numerous battles between a variety of alien, Martian, and Old Earther powers. But the damage has been minimized because of alien A.I. correction mechanisms and elemental programmed life forms who look after the underwater bio sphere. Certain elemental princes from the plane of Water have also laded claim to this jewel of blue water in the Martian desert as several would be conquerors have found out much to their dismay. Because of its wonders and the fact that its a self renewing food source, no one really has total ownership over this piece of underwater acreage.
Several species of mutated marine life offer miraculous cures for several of the most dangerous Martian diseases and entropic mutational damage making pilgrimages to the tunnels that lead to the Ocean Pit of Vuul Hru an adventures unto themselves.
There are at least twenty small to large deadly and poisonous species within the Ocean pit and its tunnels. Many of these poisons and naturally occurring chemicals are prized by Martian alchemists and assassins for their rarity and deadliness.
There are also several small Old Earth and Martian forces military bunkers still embedded in the underground maze that the surrounds the entrance to the Ocean pit and are frequent pilgrimage points for certain tribes of warriors and adventurers.
There are several mutant tribes which claim the more remote parts of the Ocean Pit of  Vuul Hru as their own and these places are tended by their ranger priests who are open to the trade of certain items, plants, and other natural wonders in certain local markets. These tribes are the target of a number of low lander tribal raiders and various scum who come for the miracles of Vuul Hru.
Some of these miracles appear in various Martian bizarres & trading posts as well as Martian relic meets from time to time.