The Therevion -Derro Attack Spiders - They want to carve you up! 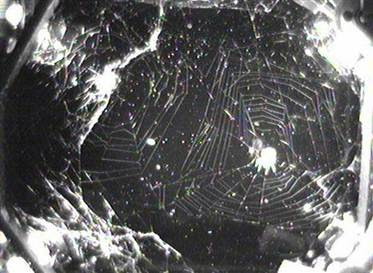 These eight legged alien gene modified terrors are the bane of those who encounter the Derro. These creatures make short work of those who encounter them with surgical bio pincers & the delicate touch of  an artistic surgeon. These make jack the ripper look nice. They're cold white hairy bodies holds nothing but terror for those who are able to see through their cloak of super science power - Cloak of The Insane. This allows the spiders to exist just outside of normal space time until they are needed by their masters. They materialize within 2 round from the edges of a room or space.
They gain three attacks per round because of their half existing nature, the speed of their cuts isn't felt for a moment or two.The vicitims react as if nothing is wrong even as their torso slides off the excess skin. These monsters often store organs, vitals, etc for later surgical cataloging. The Derro make use of these bits & pieces in the horror show of the "technology".
The spiders often scout ahead of the Derro ships & can often be found in space wreckage & other out of the way areas. The spiders never consume any recovered items themselves. In fact no one is sure what these creatures actually eat. They will however capture & destroy anyone or anything at the bidding of their masters!