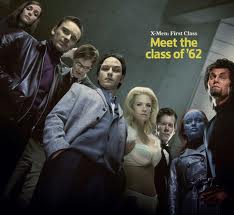 So tonight we slapped X men First Class into the  dvd player & suddenly we were transported back to the swinging 60s. We've got a ton of background on the Charles “Professor X” Xavier and Erik “Magneto” Lensherr friendship which is one of the very under scores of the film. The relationship is central to the very essence of the film which is set against the backdrop of the Cuban Missile crisis.
We get to see Kevin Bacon as the main villain & boy does he do a good job. His group of mutants would put many bond villain henchmen to shame. Charles & his x men have something that we rarely see these days depth. These are people with super powers not simply super heroes but people. The movie never talks down to you & over all its one of the better efforts I've seen lately.
The film is definitely an alternative Earth film in the fact that we see several key elements of real world history altered to fit the plot. The effect is a film that moves swiftly through the lives of both Be Charles Xavier and Erik Lensherr before they took the names Professor X and Magneto. They were two young men discovering their powers for the first time. Before they were archenemies, they were closest of friends. This is really expressed throughout the movies.
Mutant chooses were pretty cool. These are the normal run of the mill mutants that you would think of right off the top of your head but there are some surprises here.
The cast is pretty damn good if I do say so myself. Its a pretty tight film overall & its nice to see a grittier supers movie that doesn't take the audience for granted.
I enjoyed the film & will be viewing it again soon. 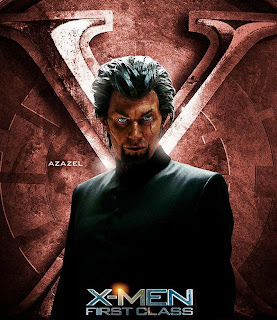 
The villain is straight mad science right out of a bond movie & you could easily adapt it to a Mutant Future game.
The First Class Swinging 60s is pretty damn generic & could support a load of supers with little trouble at all. The idea of a low powered nazi hunting game could be done with some little effort here.
One thing that I noticed is that the alignment line between Magneto & Charles isn't easy to see here. This plot element could be ported over to supers game with no problems. Imagine helping one supers group only years later in the campaign opposing them again. Then fighting along side with them.
The idea of factions(Shaw's Brotherhood & Charles X men) in the movie strangely reminded me of the Gamma World Cryptic Alliances. Imagine a party of mutants hunting criminals in the Gamma World Shadow Years before it all really goes to hell. Who were the a terrorist group called "The Apocalypse"?
Overall  the movie could provide the background & inspiration for numerous campaigns!