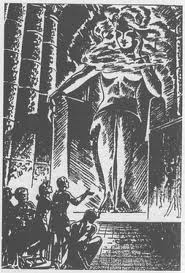 Aboard each vessel its extra planar god which not only directs the vessel but is the heart & soul of the Atlan's vast knowledge. Each & every A.I. god ranges the gamut of  behavior from ethical to inimical.
Each station is armed with a wide variety of armaments & components can rearrange themselves to suit the god's whim.
Random 1d10 weapons 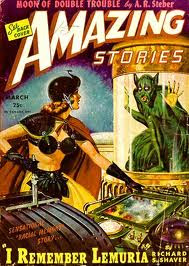 One of the most common  features of the battle stations is the veriform cloning chambers which are used to create vast armies of Abhuman tribes. The gods of the stations manufacture armies often at a moment's notice. These are sent out on raids for materials, raw essences, etc. which the station often uses to maintain itself. The interstellar gulfs are full of tribes of orcs, hobgoblins, & far worse because of these stations.

A vast array of crystal skulls are used to summon & trap many fey creatures who are used in the breaking of the reality matrices & local space time continuum for extra planar travel. The vast banks of these skulls may contain the trap spirits of their Atlan masters whose knowledge & experiences may be consulted from time to time. 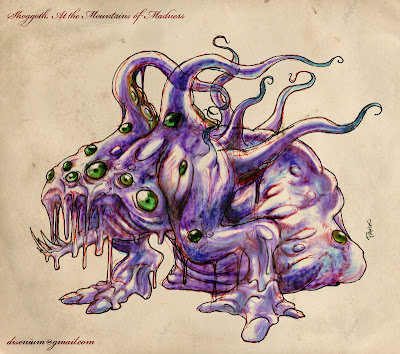 The biological systems of the Atlan stations are maintained by a vast army of shaggoths whose forms & such are ideally suited to crawling & maintaining the systems. If the god of station is destroyed or worse then the shaggoths have a tendency to run amok. 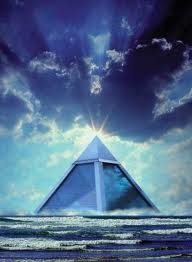 At the heart of each battle station is a sub space realm in which sits the BLACK PYRAMID. This structure is an Escher like dungeon itself at the heart of which sits an elemental fire demon. These creatures rage & bellow in the darkness but are restrained by the Atlan Super Science & may be used to break the planar barriers allowing the station to move across the universe at will.
The loosing of the monster will destroy the station but some of the monsters memorize the names of those who taunt it . Very few know to what end. 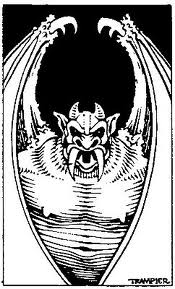 Many are those who seek the legendary stations but few survive an encounter with one.
Posted by Needles at 8:34 AM