Snatchers From The Dark Angles 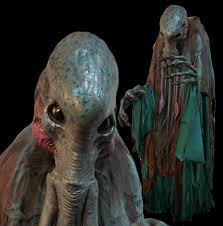 I could not but feel that some noxious marine mind had declared a war of extermination upon all the solid ground, perhaps abetted by the angry sky.
H.P. Lovecraft and Winifred Virginia Jackson
"The Crawling Chaos"
Snatchers From The Dark Angles
No. Enc.: 1d10
Alignment: Inimical
Movement: 120’ (40’)
Armor Class: 8
Hit Dice: 7
Attacks: 2
Damage: Claws 1d6 plus special, Mouth Parts 1d4 plus special
Morale: 6


A race of mutant human left over from after the horrors of the Atomic Wars when terrors walked the Earth. These degenerate remains of humanity &  the Lesser Outer Gods, are all that really remains of some part of the damaged human genome. This race moves across space like a nomadic plague. They take a number of colony worlds each year.
The snatchers operate on some variation of the same plan. Grab some helpless fool & infect him with their diseased genetic seed. The person becomes a snatcher within 1d6 days shedding their skin & humanity. The infected sabotages the colony's defenses & he uses a portable angle generator to let others of his kind in. They move across the poly dimensional rift as easily as a child crossing the street.
Each Snatcher uses a wide variety of built in weapons, the weapons all operate under the same design principle. The over riding goal of the snatchers is simple reproduction.
A claw does 1d6 points of damage & a save versus poison must be must be made or be infected with 1d4 genome pellets. These pellets are left  behind in a wounds made by the monsters.
The pellets are the size of a micro dot & will immediately begin changing the cells around them into a cancerous state of those of the snatcher. If the change isn't halted it will happen with 1d6 days.
A bite from the creature does 1d4 points of damage from the the microscopic needle sharp teeth of the creature. If someone is held by these tentacles for more then a round there is a 40% chance that the monster will inject a bio cell package within a person's throat. This will cause the body to begin to rapidly change unless save vs poison is rolled.
Once a 100 or more of the creatures are created they will form a nest. This nest will begin to sing the song of the Outer Gods & begin building an angle gate generator.
The snatchers will activate the generator & the entire world will be folded neatly into a pocket universe for reasons unknown within 1d20 rounds. Those worlds which have been recovered & returned to the real universe space time are completely cleansed of any presence of galactic humanity. It is speculated by the military of the Human Empire that the Outer Gods feast on the snatchers as well as any humans left on those worlds. Yet the snatchers continue the cycle.
Posted by Needles at 3:07 PM