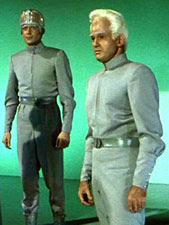 Meacham and Adams are taken to a spacious control centre where Exeter tries to explain what has happened. "I can assure you we mean no harm," he tells them.
"Like Steve Carlson and Engelborger?" Meacham replies angrily. "Like the others in that house?"
"What happened was beyond our control."
"What happened was mass murder!"

"We're not always masters of our souls, Meacham."

"I learnt it on Earth."
They are the Peace Engineers who have enslaved half a galaxy without any thought to other races. The planet Metaluna is one of  the most despised planets in the entire universe. The metalunans have held back, interfered with, & manipulated technologies of half of the galaxy all in the name of preserving their race & species.
History

The metalunian story begins with the Atlan biological & genetic experiments over 3 million years ago to develop a psionic warrior race. The results were somewhat disappointing to the Atlan but the species as a whole did maintain their ruthless efficiency & dedication order & discipline.    The race was able to climb upon the shoulders of the Yithians later on with the discovery of  some of the technolgy of the Great Race upon a Metalunian moon. The Metalunas were able to reverse engineer many of the Yithian mind expansion technology & become even more psionic. They developed super science powers & were instrumental in the development of  Interocitor based technologies. This class of technology is partially psionic in nature. They formed the Peace Engineers during this time as they saw the application of technologies in warfare as "evil" & disorderly.  Their purpose is to withhold scientific knowledge until such time as the world is ready for it. Those races who find out that they have been manipulated are often resentful & quite angry. They have done this countless times. The Metalunas  become a part of a stellar society just about to come into the development of nuclear power & hold it back. They allow key scientists & astronauts to make advances for the benefit of the Metalunan ideal.
This was until  the Zahgons. The Zahgons watched their world become a polluted, stinking wasteland under the Peace Engineer ideals. They watched it happen & swore vengeance.  A layer of ionized molecules  served as Metaluna's defence against the Zahgon meteors.It didn't help Metaluna was turned into a radioactive sun & to this day serves as a reminder that the Peace Engineers are still out there.
Physiology

The average metaluna is between 5'6" & 6 foot with a pronounced cranium, white hair, a strange suntan like skin complexion & the smug arrogance that comes with 6 million years of being the universe's chosen race.

The Metalunan may start the game with telepathy, machine empathy, & telekinisis which are the base powers used in the operation of the interocitor technologies themselves

The metalunan race can often be found in the sleaziest corners of the universe & often in space dives, gambling dens, & worse.
The Dark Side Of The Peace Engineers
The vision of a planet where there are "small cities and vast fields of pleasant color and the world was peopled by creatures not greatly variant from Earthmen. A sense of peace and contentment filled them as they looked upon that scene."
But this idyllic view is blotted out by a sudden darkness that freezes the planet's inhabitants with "an un-named terror".
The three watching Earth people feel "the incalculable evil and death that was in the blackness that shrouded the planet. Time was condensed and eons became seconds and they looked upon the world again. This time it was like an anthill in the wake of a flaming torch. Crisped and blackened, everything that represented sentience and growth and living hope had died. Through all the eons of time life would never again flourish upon that world."
The next vision is of streams of titanic warships flowing through the cosmos to fight equally titanic battles. This convinces the three humans that Jorgasnovara and his race are fighting on the side of Good. "Meacham knew that the things he'd seen were true. He knew that Jorgasnovara had not lied, that his people were combating a vast force that would destroy the hope of endless races of sentient life on countless planets."

The term interocitor itself, rather than referring to a specific device, likely refers to a general class of devices that share a common set of operating principles (similar to the term computer). This is inferred from the fact an interocitor is observed or described in many different roles:
In the film, advanced physicist Cal Meacham first becomes aware of an interocitor when a book arrives at his lab entitled, Electronic Service, Unit #16. Inside is contained a bill of materials for the interocitor, describing it as, "incorporating greater advances than hitherto known in the field of electronics". From the specifications, Meacham opines, "There's no limit to what it could do. Laying a four lane highway at the rate of a mile a minute would be a cinch."
Of the 2486 components comprising an interocitor, only three are mentioned by name in the film:
The instructions accompanying the components also caution that no interocitor part can be replaced, and to bear this in mind while assembling.
Once assembled and powered, Meacham places the intensifier disk into the right-hand control and rotates it 18 degrees counter-clockwise. Upon doing so, the telecommunication function of the interocitor is activated, and Meacham establishes contact with Exeter, the party responsible for sending him the device.
During their conversation, Meacham's lab assistant, Joe Wilson attempts to photograph the device, but is informed by Exeter that "Your camera will pick up nothing but black fog. Images on the interocitor don't register on film." It is unclear how any image of an interocitor could exist. 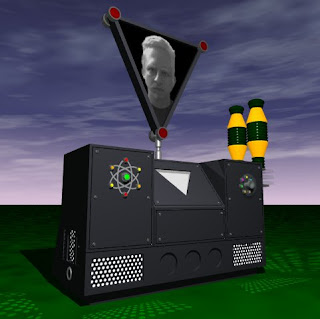 The metaluna species often operates from behind the cloak of dummy corporation such as this http://shipbrook.com/jeff/interocitor/index.html &
Electronic Service, Unit #16. which supposedly "incorporates greater advances than hitherto known in the field of electronics".
Many races believe that the metalunans are  immoral and misguided. They have proven to be some of the most misjudged races in the universe. Perhaps it was just as well they all died before they obtained the secret of transmuting base elements into atomic fuel.
Perhaps the Zahgons were right after all. There are however still Metalunan colonies scattered across the rim of the universe. 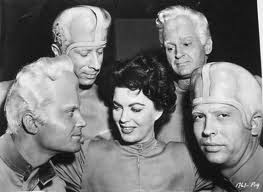