The Chinaullincang - The Stygian Generals 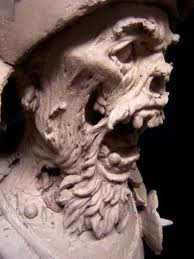 They were once the movers & shakers of Earth before the Atomic Wars but were seduced by the promise of power & deception. Now they are in service to the Lord of  Death himself. The Worm Lord will not let them go, these unliving generals are often seen among the ranks of those who command the vast Ebony Fleets..
The 9 kings as they are affectionately known hold sway over 9 systems that they rule with an iron hand. Each of the 9 is known to have strangely wrought artifact that holds their very soul that they guard with their un lives. Those who have slain them in the past have only been cut down in horror as they reform again upon this plane to do battle repeatedly. They grow more rotted, more insane, & have forgotten yet another piece of their former existence.
For them this plane is hell itself, they are trapped with in rotting bodies neither dying nor living. The nanite factories which keep them going are as strong as ever but there is only so much that they can repair.
There are several astronaut cults which have sworn to slay them but they are not yet in a position of strength & so a game of cat & mouse is played on a cosmic scale. The average galactic citizen pays the price for their rotting grief.
Posted by Needles at 4:54 AM