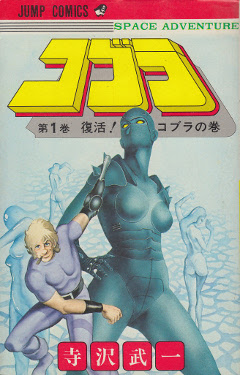 Back in the 90s when I was first really getting into Anime & on many weekends I could be found down in Manchester Connecticut in the back of  hole in the wall comic shop/game store there was one anime that really stood out. Cobra was an old school anime with the distinctive style that I came to know. There is something very distinctive about the look of the characters, vehicles, weapons etc. Cobra stood out because of its more mature content. The main character had a big cybernetic gun built into his arm & an android assistant. The plot is pretty complex for a straight anime. Just read the entry I copied from Wiki & you'll see what I mean. A dungeon master has a huge amount to work with here. The anime is brimming with ideas.


Johnson works for a futuristic trading company. One Sunday morning his robotic maid, Ben, wakes him and suggests that Johnson go to the Trip Movie Corporation (T.M. Company), a company that enables their customers to experience a dream as if it were real. Johnson asks to be the king of a harem, surrounded by beautiful women, and commanding a battlestar.
In his dream, Johnson as "Cobra" explores space with his partner Lady Armaroid. Cobra wields the "Psychogun" to fight against monsters from other planets and against the Pirate Guild. After a battle with the pirate guild, Johnson allowed the leader, Captain Vaiken, to escape. Vaiken distributed Cobra's picture to all every other pirate, making him a wanted man. When the dream ended, a woman asked Johnson how the dream was. After Johnson described his dream, the woman corrected him, saying that it should have been about being the king of a harem.
On Johnson's way back home, he crashed into a speeding car. He recognized the driver, who looked identical to Captain Vaiken. Johnson started to explain to the driver that he looked like Vaiken, thus making Vaiken think he knew something about Cobra. Johnson unconsciously lifted his right arm as if he had a gun, and shot a ray out of his hand, killing Vaiken. The shot blew up his arm, revealing the Psycho-gun.
After Johnson hurried back home, Ben noticed his arm and Johnson realized that he did not remember anything from the last three years in which he had lived in his house. After looking into a mirror, Johnson found and turned a knob to reveal a secret room behind it, which revealed a revolver which he used in his dream. Lady Armaroid then came out from hiding within Ben.
As Johnson began to recover his memory, many people were simultaneously recruited by the Pirate Guild to kill Johnson. After Johnson killed the new recruits, he started to remember that he was Cobra, was wanted by the Pirate Guild, and that he was tired of fighting them off. He also remembered that in order to get away from them, Cobra surgically altered his face and had his memories erased. Lady Armaroid tells Cobra that Trip Movie had apparently triggered his sub-conscious to bring back old memories. This begins a series of adventures by Cobra and Lady Armaroid.
Cobra later meets Jane Royal, one of the Royal sisters, in a bar. Jane Royal teams up with Cobra and Lady to find the other two Royal sisters, whose tattoo maps lead to the greatest treasure in the universe.

Cobra (コブラ?)
Voiced by: Nachi Nozawa (TV anime, OVA, Cobra the Arcade), Shigeru Matsuzaki (movie),Yasuo Yamada (PC Engine games), Yūsaku Yara (PlayStation games), Naoya Uchida(Cobra the Animation), Dan Woren (English dub), and Doug Stone (Sega CD game).
Cobra is the main protagonist and eponymous character of the series. Buichi Terasawa drew his inspiration for the figure from the French actor Jean-Paul Belmondo due to the roles Belmondo played in the 1960s and 1970s. Cobra's signature weapon, the "Psycho-gun", is a cybernetic arm-laser which connects directly to his brain. The Psycho-gun can target putative enemies without having a line-of-sight. Though using the Psycho-gun drains his mental energies, Cobra's superhuman stamina makes up for it. He also carries a "Python 77Magnum" revolver as a backup weapon.[1][2]

Lady Armaroid (アーマロイド・レディ Āmaroido Redi?, originally "Armaroid Lady")
Voiced by: Yoshiko Sakakibara (TV anime, movie, OVA, Cobra the Arcade, Cobra the Animation), Etsuko Ishikawa (PC Engine games), Toshiko Fujita (PlayStation games), Joan-Carol O'Connell (English dub)
Lady Armaroid is Cobra's long-time partner in the story, representing the serious half of the duo. She and Cobra share an unspoken deep trust, and each always comes to the other's aid in times of need. As a top-class Armaroid (a mechanical cyborg), Lady is derived from advanced technology recovered from an ancient lost civilization of Mars. She possesses superhuman strength, but does not carry a weapon and is rarely involved in direct physical combat. When Cobra is away on adventure, Lady typically supports him as the pilot of their spaceship, the Tortuga.[1][2]

Jane Royal (ジェーン・ロイヤル Jēn Roiyaru?)
Voiced by: Toshiko Fujita (TV anime), Akiko Nakamura (movie), Masako Katsuki (PC Engine games), Barbara Goodson (English dub)
Jane Royal is the first of the triplet daughters of Captain Nelson that Cobra meets. Each of the three sisters has a unique tattoo on their back which, once assembled in a chromatic sequence, form a map leading to a hidden treasure of gold, diamonds, and the fabled Ultimate Weapon.[1][2]

Catherine Royal (キャサリン・ロイヤル Kyasarin Roiyaru?)
Voiced by: Yuko Sasaki (TV anime), Toshiko Fujita (movie), Manami Maruyama (PC Engine games), Mari Devon (English dub)
Catherine Royal is the second of the triplets that Cobra meets, after a request from Jane to rescue Catherine from the Sidoh Penitentiary. As a timid school teacher, Catherine is the only sister who is not involved in a violent line of work.[1][2]

Crystal Boy (クリスタル・ボーイ Kurisutaru Bōi?, originally "Crystal Bowie")
Voiced by: Kiyoshi Kobayashi (TV anime, Cobra the Arcade), Gorō Mutsumi (movie), Tesshō Genda (PC Engine games), Koji Totani(PlayStation games), Hiroki Tōchi (OVA), Jeff Winkless (English dub)
Crystal Boy is Cobra's archenemy. Crystal Boy sees Cobra as the only man worthy to become his adversary. He is a humanoid cyborg with a golden skeleton and a body made from indestructible polarizing glass. He works for the mysterious "Guild", led by Lord Salamander. Crystal Boy's signature weapon is a claw which he can attach to his right hand. The claw can crush anything, and he also uses it for slitting his victims' throats. The claw has a built-in laser gun which can also be used as a grappling hook or fired as a projectile.[2]

Sandra (サンドラ Sandora?)
Voiced by: Reiko Tajima (Japanese), Catherine Battistone (English dub)
Sandra's first serves as the ruthless and cold-hearted leader of the Snow Gorillas, the local branch of the Pirates Guild on her own planet. Later on, she hounds Cobra and tracks him down on the planet where the Ultimate Weapon is hidden. Originally ordered to retrieve the Weapon and turn it to the emissaries of the Guild, she uses it for her own ends and turns against the Guild itself until Cobra stops her in her tracks.[1][2]

Lord Salamander (ロード・サラマンダー Rōdo Saramandā?)
Voiced by: Hidekatsu Shibata
Lord Salamander, a deep-voiced man dressed in samurai armor, is a creature of mystery. After he unites the Pirates' Guild under his command, Salamander's unquenched ambitions lead him to strive toward absolute control over the galaxy. While he rarely appears in person, Lord Salamander demonstrates a powerful telekinetic ability when he does. He can also teleport, incinerate an enemy by will alone and even trick their minds into seeing him as someone else. He uses this trick and his other powers to dispose of Doug, Pumpkin and Bud. It is revealed in the final episode that he is the spirit of Hitler revived 3000 years after his defeat.[3]

Ben (ベン?)
Ben originally seems to be Cobra's personal robot butler when he was still under the guise of Johnson: a clumsy, clunky and dull robot which actually was Lady in disguise.[2]

Like many of  its creators anime's this isn't a kid friendly one at all. The subject matter is mature & still remains       faithful to the manga. Its a bit on the goofy side but for a bit of a cool & sort of campy campaign