After a grueling game last time, the party decided to get 18 hours of rest to recharge the batteries! There was no surprise on my part. The first thing the pilot did was to integrate the interocitor with the ship's psi- banks. After several dice rolls, the party was able to get the technology in tune with the ship's computers. After 18 hours Irving the Shaggoth was very hungry & decided to munch on some of the captured pirates from a few games ago.
The ship's pilot tuned to the strange technology of the interocitor & used it to scan the planet for any sign of the Metaluna astronauts or the rival House of Norstrom folks 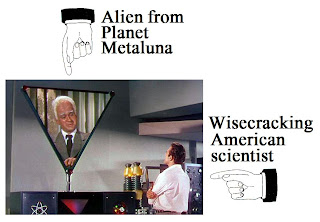 The party learns that there is a space craft on the island retreat broadcasting a gravity wave to a nearby gas giant moon. The party uses the interocitor's energy beam on the ship's fuselage/ fold system. Not realizing that said weapon system has been juiced up by an order of  x three. They destroy the ship & the fold system making the gravity wave.
The island is sucked away in a maelstrom of inter dimensional violence.
The mini black hole leaves a very large hole in the ocean creating a tidal wave of incredible force.
The moon on the other side of the gas giant launches a torpedo. This has another black hole generator aboard!

Meanwhile the moon phased out of the local space time continuum. It waited there in null space with the gravity generator turned up to high.
The group hacked the torpedo with several combined rolls.  They were really sweating it though as several panicked transmissions came in from the planetary surface. The party took control of the torpedo & sent it back just as it came back into phase.
They rolled a natural 20 here
The torpedo hit & destroyed the moon

The entire system became destabilized & it wasn't going to be long before the entire system became unstable. The party's scientist made several astrophysics rolls. The party's asteroid ship moved into the moon's orbit & the asteroid fell into deep orbit.  It filled the role of moon perfectly while the party pondered what to do!
The game had a break here & a few days passed
Meanwhile the House of  Nordstrom was trying to stabilize the planet by distributing emergency aid & such.

Actually they were selling the aid & making a profit on the side while they were getting good public relations at the same time!
The party finally got a hold of a minor house to help stabilize the reconstruction of the moon they'd destroyed earlier
The Metaluna Astronaut Cult they'd encountered in the previous game kept things hopping when they're rival & head of the cult showed up & revealed he'd triple dealed them with several NPC groups!
The astronaut cult leader had hacked their interocitor & threatened to blow the planet up if they didn't submit to his demands
The group used several super science powers to figure out that astronaut was linked through an innocent guard's brain & was using it as a lens for his powers. He wanted the group to help stabilize his employers role in ruling the planet!
The party sent out their warrior in power armor & an npc robot to kill the leader of the astronaut cult. The party sent a mental pulse through the interocitor killing the guard & breaking the link!
A planar demon appeared behind the operator of the interocitor & Irving  attacked it. The rest of the party left the room & sealed it as the demon combat began. It ended with a bad roll on my part as Irving tore the thing apart!
So it ends here for now!

The group really worked together in a tight form & Irving had a workout eating various people. The astronaut cult that they deal with has become a sort of semi solid group of Npcs. We've switched the game from Wednesday nights to Thursday. Lots of changes happening within the campaign with new stuff being designed by a few of us.
Posted by Needles at 8:53 AM