"Homeless people have been disappearing all over California & no one knows what's happened to them? And then ordinary citizens of Hollywood and Beverly Hills begin to disappear without a trace. And this is when the vampires and the creatures of the night begin to notice. The FBI & even the CIA are called in to no avail. The vampires notice when ten per cent of the population disappears in one night" 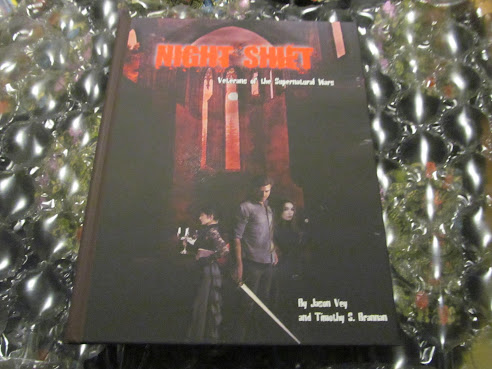 All of our action takes place deep in the California night!'

The PC's are called in as a 'Strike Team' from each of the supernatural courts of the night. This is going to require investigation & finesse. The player's PC's began to get on track when a vampire family goes missing. And they went to the Beverly Hills mansion and ran smack into a group of strange hunched back grey creatures. None of the players recognized the monsters! Trolls, Orcs, etc. nope & nope was my answer. These things were tough & they immediately attacked the PC's!
'The humanoids are massively musceled with strange with hump like organ on their backs. They stand at least eight to ten feet tall. And they have wicked teeth grinning at you  along with staring yellow grey eyes just staring blankly with rage! ' As soon as your spotted they attack!
Abhuman tribesmen
No. Appearing: 2-12
AC: 7
Move: 50 ft.
Hit Dice: 3
Special: They can hurl  debris  or a rock dealing 2d6 damage and keeping the best of the two.*

XP VALUE: 50
The family of vampires had been impaled on the remains of the house's structure and the savage monsters had set the house on fire when the PC's interrupted them! After attacking the PC's the horrors escaped out the windows as the house began to burn. We're playing a cinematic game as you can tell. The next morning two of the PC's human NPC retainers were able to get the police report and the head vampire of the family was a curio & antique's dealer. Mr. Harold Donner was a very middle tier dealer in fine antiques. Well the players wanted info and that meant the '26 Hour Club' a supernaturals only club run by the Druidess.  The Druidess is a Fey of indetermine court origin who runs the club for unknown powers. 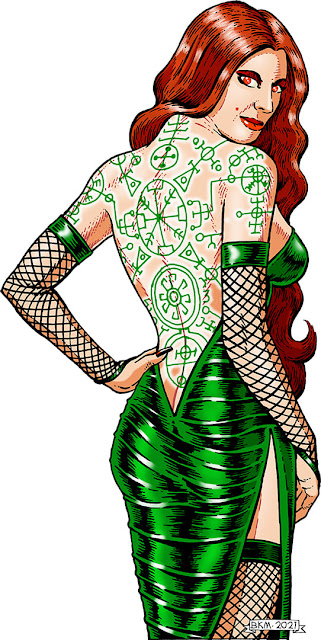 I often buy a clipart critter for special NPC's this one comes from the Drudic Femme Fatale . This is the Druidess in our campaign, the matron & headwatress of the 26th club.

The '26 Hour' club is also an information brokering house & plays very prominiant role in our other campaign. The other player's PC's are the 'house staff' who run trouble shooting organization for supernaturals.
Anyhow the PC's found out that an artifact called the Crimson Carbuncle had been stolen from Mr. Harold Donner. And strangely each time the Crimson Carbuncle is a mind enhancing artifact able to provide the user with visions of future events. The Crimson Carbuncle is a part of a collection of three such artifacts including another gem called the Waters of the Green River. The Green River is on display at Mr. Harold Donner's Beverly Hills antique shop.  The PC's paid the Druidess in two future favors or missions coming up. And left... Tune in next week for further developments.