"Terror. Sheer blind terror sublimated and spat back out of the barrel of an M16. The fear and isolation. The desperation to get out alive - just to get out and get home. A green hell populated by a people who despise you and want to kill you. Or maim you. Or send you mad. This is the Vietnam War. This is GRUNT.

GRUNT attempts to be historically realistic, claustrophobic and packed with a great deal of nervous tension. There are no Rambos or John Waynes here, no daring commando raids and white-toothed grins. You're approaching the heart of darkness, a world of fear and anxiety, booby traps and ambushes, where your body rots in the rain and you're dead beat all day, every day. "You're in the Republic of Vietnam," said an infantry officer at Bien Hoa to his new recruits. "This is the programme for the day: You're going to get killed in Vietnam."

Includes:
• Combat rules that simulate the fact that in most firefights you cannot see the enemy!
• Helpful advice on running the military campaign
• Background on South Vietnam
• Quick but flavourful rules keeping the action speeding along
• Stress - Terror rules and ways to stay human
• Advice on creating infantry combat missions, including downtime and personal stories
• Twelve scenario seeds based on the titles of tracks by The Doors

An old military adage sums up GRUNT perfectly;
"Anything you do can get you shot. Including doing nothing.""

I bought Grunt by Paul Elliot From  Zozer Games with the whole idea of running ambush games. Within my gaming hobby has been the fact that every time we'd game together we'd find that veterans of all kinds would be at our table. But early in this hobby I managed to find myself gaming with Vietnam veterans. 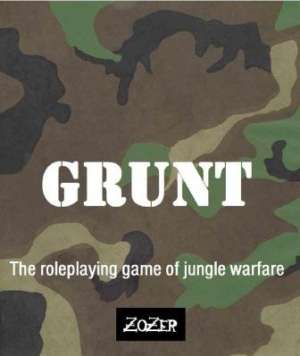 The stories I heard at the table & after the games still haunts me. Why?! Because both my uncle & my father were also Vietnam veterans. The war has still left its scars on my dad with Parkinson's disease. But Grunt has a whole other feel, the Grunt Rpg is done from the perspective of a historian who respects the military history of the conflict. Grunt is a dark gritty rpg that sucks the gamer in with a simplistic & easy to follow 2d6 system.
Grunt takes the idea of the ambush as a part of the design the 2d6 system takes on the Stress rules so that even NPC's have depth & danger to them.  The boys of the 1st Cavalry (the PCs) are in the line of fire right from the get go. Ambushes, indirect fire, artillery, and more are all a part of the PC's lives. This isn't a game about 'heroes' but soldiers. Everyone is on an even keel  but the wilds of  Vietnam are deadly in spades.
In my opinion Grunt is very well done for the rpg 2d6 veterans and simple enough for the beginner. Grunt takes the PC's with the idea of the soldier being  vulnerable & militarily naked so to speak. Grunt is an rpg that pulls the player unto itself. If played correctly Grunt could be a very nicely done mini campaign game of Vietnam action.
Grunt is nasty, dirty, dangerous, & very well done written by a historian who knows his Vietnam history & the dark heart of the conflict. Is this a rpg for the faint of heart? No, this is a 2d6 well exacuted Vietnam conflict rpg and its a game of ambushes, battles, fire fights, and more. Things can go from good to sideways in this 2d6 rpg. Could Grunt be used for alternative history?! Yes, I think that it can & there are lessons here for the Cepheus Engine rpg.

Grunt is both a game & a good supplement that I think that Paul Elliot learned from this rpg for Modern War rpg. Grunt is well tuned for what it does which is the Vietnam war as an rpg campaign setting. As a campaign  setting Vietnam is a vicious & terrifying place for PCs & NPC's. Its sketchy,violent, and absolutely nasty because it wants to kill your PC. Grunt is a war rpg that takes itself seriously and its a damn good game that I believe is underappreciated.