"An armor-clad warrior unsheathes her sword, preparing to lay an abomination low. A robed recluse dares forbidden tomes in a quest for deeper magics. A cloaked skulker carefully studies his next burglary target. A representative of the gods prepares to make more converts one way or the other. Meanwhile, non-human eyes watch and wait for weakness… 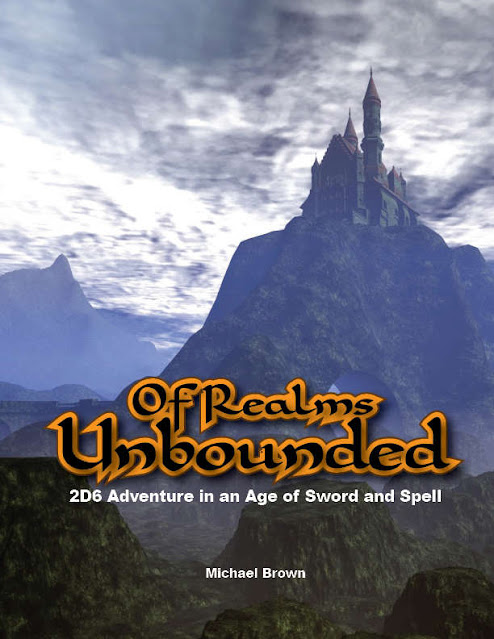 Authors such as J.R.R. Tolkien, Fritz Leiber, Jack Vance, and others crafted worlds of blade, sorcery, and the fantastic that not only enthralled readers and spawned a literary genre but inspired the first roleplaying games. These games have always been for players using other systems, but now 2D6 players can visit their favorite fantasy worlds. Of Realms Unbounded is an RPG supplement based on the Mongoose 1st Edition 2D6 OGL system (which is itself based on The Original Science-Fiction Roleplaying Game first published in the 1970s) and adapted to create heroes and adventures suitable for a fantasy campaign. The system stays well out of the way of the Referee’s and the players’ imagination, allowing them to craft the world they desire. The rules include several adventuring careers (using a familiar lifepath and skill-acquisition mechanic), customizable to emulate the character classes of The Original Fantasy Roleplaying Game; familiar fantasy races and monsters translated into 2D6; rules for improvised weapons; a streamlined Aging mechanic; a lean armor system; and even includes the rules for Magic use in the 2D6 system.

Of Realms Unbounded. Fantastic adventure awaits! Are you prepared?"