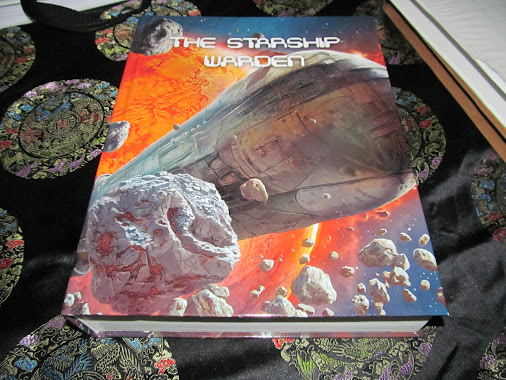 So the party has been playing in S3 Expediation to the Barrier Peaks and rounding up some of the monsters that have escaped into the wilds of Greyhawk. But they came face to face with a giant mutant Chicken ogre and almost bought it! It took seven players to take down the thing & then cries of woe as the Colonial Sanders jokes flew or laid an egg. As the party dove for cover as the mutant chicken orgre's corpse exploded like a fire ball!

Its been a couple of months sincce my party of adventurers signed up for Troll Lords The Starship Warden campaign. And two of the players have had scheduling difficulties and so its force me to consider moving on. Now to boast player  numbers we're going to be adding in our regular Castles & Crusades group into a rotating roaster for the Warden game. Now I'm taking over DM Steve's C&C game on Saturday nights.

DM Steve has been running a modified Greyhawk campaign & the player's PC's have run straight into S3  Expediation To The Barrier Peaks by Gary Gygax! They've made it to the teleporter & have been messing with it on & off for a few months. After going outside the wreck to stop some of the rampaging monsters. The party has a hold over from our Amazing Adventures campaign who stayed behind in Greyhawk who thinks he's got the teleporter umm 'fixed'. So this week's game the gang teleported aboard the Warden! 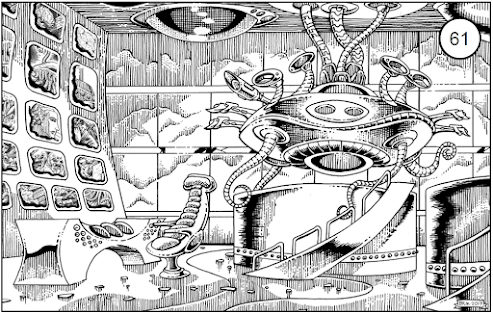 For the moment they have no idea where they are! The party right at the moment is inside an engineering section between decks. And there was a welcome waiting for the party in Sunday night's game. Alternative armies miniatures does the dreaded mutant miniature  Clukkatrix ;"These beasts are what nightmares are made, huge mutated chukk let loose on the enemy in a whirl of claws and feathers, a terrible sight to behold. When a chukk warrior has been "evolved" through either over stimulation, or artificially, it may become a Warp-chukk, or indeed a monstorous Clukkatrix. So wild and dangerous are they, that any mind control methods are no use any more, and these creatures are free to roam where ever they like, attacking anything in sight and devouring the victims." 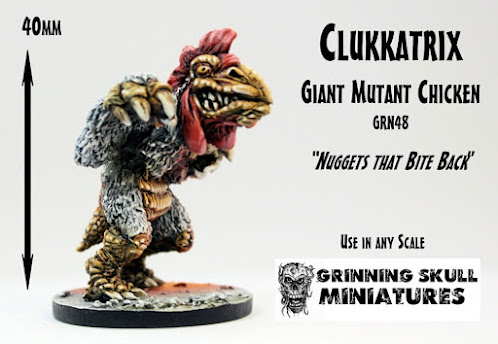 Clukkatrix have several deadly forms of attack, a sharp razor like beak and claws, slash, peck and rend the enemy (and ally) to a bloody pulp, while their noxious belches and farts release clouds of deadly poisonous gas that are generated from the rapid mutations. Often this gas build up leads to them exploding when destroyed, causing even more gore and carnage. "

Will The party survive against this dread mutant from the depths of Warden's cloning vats?! Will they figure it all out by next week!?
Posted by Needles at 11:42 AM