Sometimes you've got to go backwards to go forwards. In this case it was understanding that there was already an exclusive adventure location within the Wilderlands. In this case it was the fact that back in 2016 we had run through the Labyrinth Lord's the Gibbering Tower a free OSR adventure the tower is situated near  somewhere  the Caverns of Quasqueton. 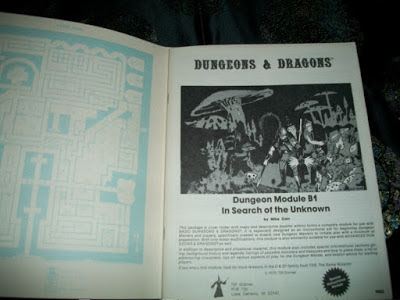 Now a major source for using this is  major inspiration for this campaign was Jason Zavoda's blog posts from 2013 on using B1 for an Astonishing Swordsmen and Sorcerers of Hyperborea campaign. Personally this is one of my corners stone modules, easily customizable and infinitely usable with lots of campaign styles. When it comes to extending the holdings of the lords of Quasqueton there are few dungeons that come to mind.. But for the Wilderlands of High Fantasy? Faster Monkey Games Skull Mountain has everything we're looking for. Did we mention that Games Skull Mountain  'pay what you want' 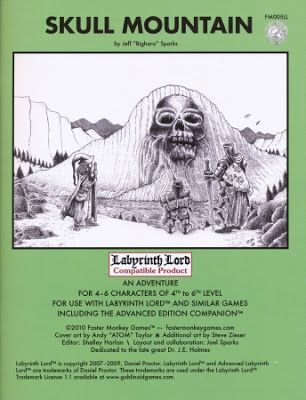 In the past  Skull Mountain has been a nexus gate destination & a perfect add on for the temperate areas around the Great North of the Wilderlands of High Fantasy. Its also been one of the main interests for the dark powers & occult weird royals who covet its secrets. The Free Flame Princess Cult Fanzine available here is a perfect add on.
Why?! Well according to the intro; "Although not an official LotFP product, the online home for this zine is the official Lamentations facebook group If you’re reading this and aren’t already a member, please join us! You’ll find there a variety of opinions regarding what LotFP gaming can be, as I think is expressed nicely in the variety of articles you’ll find here. Some of the things you find in these pages take the default Early Modern setting of LotFP very seriously. Some don’t. And some are just plain weird."  Personally I fall into the 'just plain weird' category.
But it begs the question if Dark Europe 'my default pseudo historical  setting for LoFP & other OSR games Europe centric games' found out about both the Wilderlands & Hyperborea. There would be a colonization race. This means that there would be rival parties of adventurers with fire arms. My default groups have been the French, The English, & the Spanish. Not necessarily in that order.

The response from the City State of the Invincible Emperor has been lukewarm at best & at worst sent back the Spanish delegation's  body parts back through the nexus gate. This all connects back using Vespero the Antiquarian had ties to the court of Spain & several of Zelligar the Unknown occult treasures. 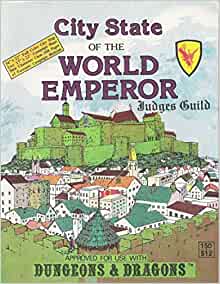 Email ThisBlogThis!Share to TwitterShare to FacebookShare to Pinterest
Labels: OSR Commentary - Weird Tales Judges Guild Wilderlands of High Fantasy- B1 In Search of the Unknown By Mike Carr