The Beast From 20,000 Fathoms - A Monster Menace For Cepheus Atom & the Barbaric! rpg

The  Rhedosaurus from Beast from 20,000 fathoms 1953 is a Ray Harryhausen classic Kaiju from the golden Atomic age & perfect for Cepheus Atom , Barbaric!  & finally the Hostile rpg setting.  Think that Rhedosaurus shouldn't be in the Hostile setting. A baby beast had a cameo in the MST2000 classic 'Planet Dinosaur'. This isn't your ordinary Kaiju for the Rhedosaurus carries within its blood deadly microbes that will cause a disease in any victim who comes acros its path. 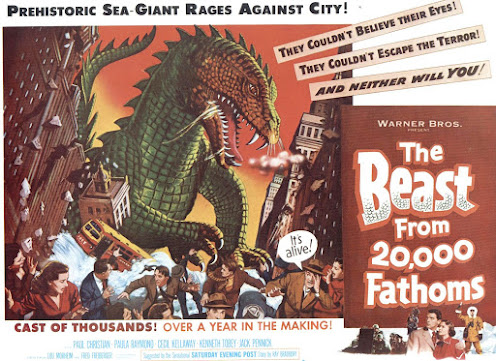 The  Rhedosaurus species has been a resident of the inner Earth since the early 20th century when atomic testing awakened it from its millions of years sleep. Ancient alien flying saucers returned with samples of the Kaiju species to many biological containment worlds. These worlds are often run across by space explorers much to determent of said explorers.