An ancient clan of nameless samurai warriors have been cursed by the elder Oni to forevermore be at the beckoned call of black wizards from across space & time. This clan's name has been struck from history but the summoning ritual has been passed from black wizard to cult for eons. The spectral samurai are incredibly dangerous husks of their former selves with absolutely no souls left within their ecoplasmically created armor. They will carry out feats of incredible cruelty & bloodthirsty evil without a thought. 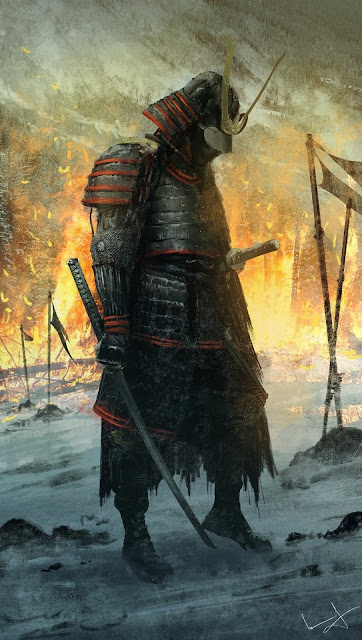 Undead: immune to poison, disease, and suffocation. • Immune to mind-affecting magic • Incorporeal: immune to non-silver, non-magical weapons. • Knows 1D spells, chosen randomly from the Black Magic lists. • A character damaged  by a spectural samurai's swords  must throw END 6+ or permanently age 4 years (which may entail Aging Table throws). • A creature slain by a samurai will rise as a wraith on the next full moon. Each samurai will have 1d10 wraith's former victims under their control

Each spectral samurai are unique undead that on an instinctual level hate all living beings & will seek to answer the call of a black wizard for the opportunity to slay the living. They are very dangerous because of the malevolently chaotic behavior that drives these undead fiends. Because they can be summoned with a sorcery check of 4 many wizards open doors to allow these horrors through the plane prime. These undead can & will appear in barbanian infested lands or even within the post apocalytic land scape. They are not adverse to workin with mutants or other evil warriors as long as these beings submit to the leadership of these horrors from across space & time.