" Mike Carr wrote In Search of the Unknown and intended it for use as an instructional adventure for new players. Interior art was by David C. Sutherland III, while Sutherland and David A. Trampier did the cover of the original monochrome edition. The updated 1981 edition featured front and back cover art by Darlene Pekul."
From the B1 In Search of the Unknown D&D Fan Site Wiki entry here. 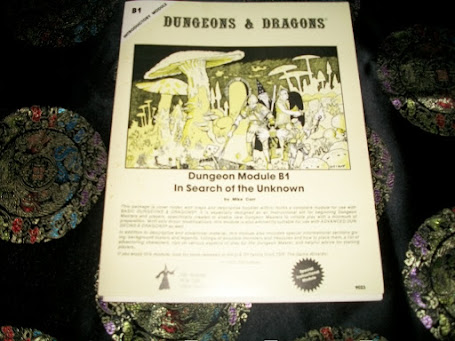 Oh no not another recap blog entry into how great B1 'In Search of the Unknown' By Mike Carr  module is tinged with nostalgia. Umm no I'm gonna talk about what a pair of bastards the  two wealthy adventurers, Roghan the Fearless and Zelligar the Unknown, are for a moment. As you go through the upper levels of Quasqueton something becomes apparent it's two owners were into some shady stuff. Hell even Dyson Logos loves B1.  Because of the module's  customization there's ton of options that the DM can pull out.  Roghan the Fearless and Zelligar the Unknown, were facing down a very dangerous horde of barbarian raiders. My own experiences with B1 have been interesting with player's PC's claiming Quasqueton as their own to use as base in the past once the dungeons & various levels have been cleared out. Recently we've  been reading through Pacesetter's Games B1 sequel Legacy of the Unknown. 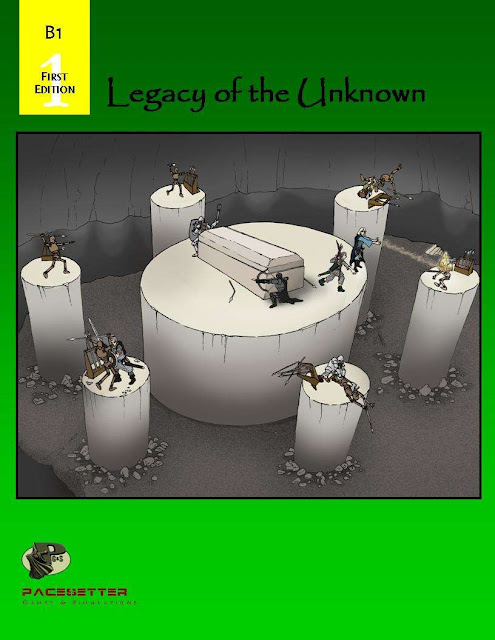 B1 "Legacy of the Unknown" (2011) by Bill Barsh.
Illustration by Chris Letzelte 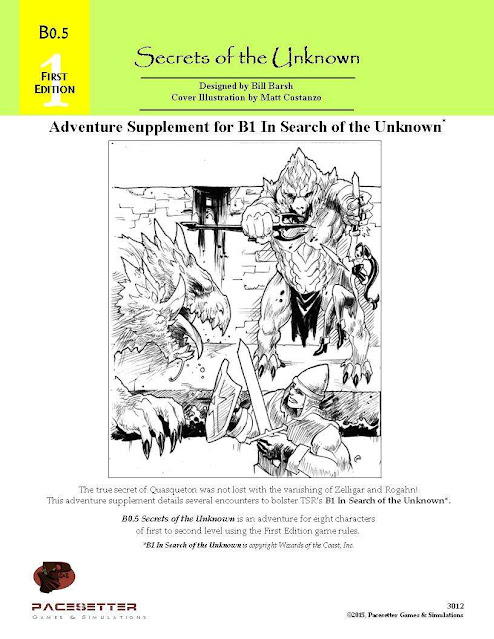 In several players minds way to the North of the Wilderlands of High Fantasy is giant piece after giant piece of Sword & Sorcery Atlantean debris sitting in the giant grass fields of the Wilderlands. Over the horizon is a Lovecraftian style. This all plugs into a Nexus gateway that leads near several locations mentioned in Astonishing Swordsmen & Sorcerers of Hyperborea's The Sea Wolf's Daughter. Where does this place B1 'In Search of the Unknown' By Mike Carr within the Wilderlands of High Fantasy?! I would say it would be near one of the temperate zones of the Wilderlands not necessarily smack in the middle of one the raving hordes of barbarian turf. The Quasqueton complex has to be far enough away from civilization to not have been looted by just any 'Johnny Q' party of adventurers. But where the Hell could a party of lagitmate explorers find information about the complex?! Fight on issue #3 has 'Haghill by James Mishler of Adventure Games Publications, detailing the legendary village near the City-State of the Invincible Overlord and the communities monstrous and mundane that surround it!' This is the perfect cut throat location to bring explorers of the unknown into the fore. 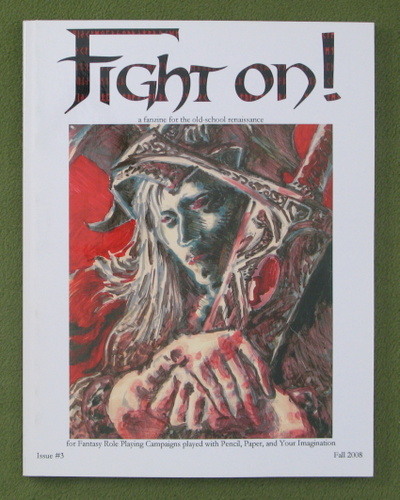 Would the B1 'In Search of the Unknown' By Mike Carr adventure locations be of interest to any other OSR adventurers?! In the past we've added several rival adventuring groups from Spain & England from Lamentations of the Flame Princess rpg as those wanting to gain the 'wisdom' of Zelligar the Unknown. This was after using Vespero the Antiquarian as an NPC from Vacant Ritual Assembly issue #1. 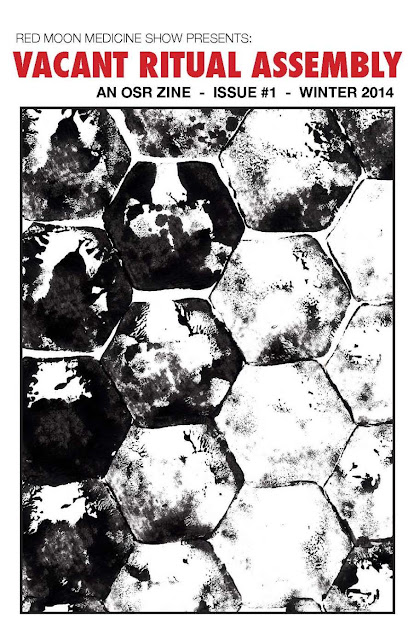 Vespero the Antiquarian had ties to the court of Spain & several of Zelligar the Unknown occult treasures. So the PC's came fact to face with Spanish guns. The two forces had to join up after a group of incredibly dangerous pig faced orcs & their barbarian allies showed up!
Could this whole cloth outline tie in with yesterday's blog entry?! Possibly but it would me a whole lot of juggling on the levels of Roghan the Fearless and Zelligar the Unknown

Email ThisBlogThis!Share to TwitterShare to FacebookShare to Pinterest
Labels: 'Pay What You Want', Astonishing Swordsmen + Sorcerers of Hyberborea Second Edition rpg, B1 In Search of the Unknown, Lamentations of The Flame Princess, Mike Carr, The Hidden Serpent