This blog entry picks right up where yesterday's left off & we dive into another Martian ecology with an OSR twist or two. 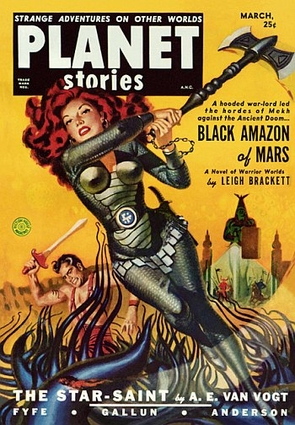 Leigh Brackett's Black Amazon of Mars wraps up the Stark triliogy of stories. Black Amazon of Mars by Leigh Brackett originally appeared in the March 1951 issue of Planet Stories. It can be read online here at Archive.org. And yes it has some incredibly interesting characters & an apocalpytic situation of dire Pulp proporations upon Brackett's Mars. What I want to do is tackle this story from the other end of the spectrum & that is the Lovecraftian monsters lurking within this story. Stark, as an "Earthman out of Mercury" sits in the Martian setting like the Old  Western hero of a typical Orientalist yarn: he's violent and morally upright, and he's confronted with exotic beauty and spooky mysteries. And could in many respects be considered an aspect of the Eternal Champion of Michael Moorcock fame.
All of this kicks off with a Martian thief & Stark's partner having stolen the artifact of Ban Cruach. And Stark fufilling a life debt for his partner. It rings out in an 'Old Western' life debt between the native & the outsider. The trope isn't lost on the reader & it works. And it also works as a motivator for old school adventure. But what strikes me is the dual role of the hero king  Ban Cruach to both sets of Martians. He sits as genocidal warlord of Hitler proporations to Lovecraftian polar martians beyond the 'Gates of Death' & as a hero king to the humanoid tribes. The Pulp microwave set up of the old king is a clever plot device. 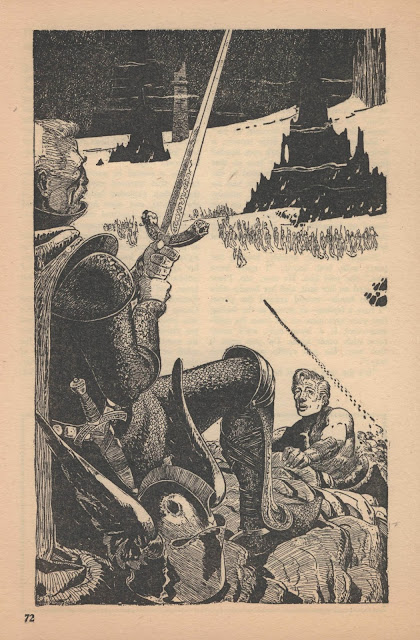 The Lovecraftian 'shining ones' with their deep freeze apoclaytic slide want back their lands & their inheritance of Mars. And then there are the Martian humanoid tribes around the city states that have become roving hordes of Gengis Khan level armies out to plunder all of Mars. The barbarians  end up becoming Mars polar guardians but interesting is the fact that the 'shining ones' are far more then they seem. Two sentiant races of Mars evolving along the same lines. What are the odds?! Slim & none come to mind.  The 'shining ones' remind me of some of the tribal ancestor mythological figure races  of the plains American original tribes both their outlook & their goals. The view point of the humanoid tribes of Martians & the 'shining ones' stands in stark contrast to the view point of Michael Moorcock's Melniboné empire vs its human rivals of Pan Tang.

And this is a theme we see in both old school adventure  modules & OSR role playing games such as Lamentations of the Flame Princess. The old races vs the upstarts who are moving in. This conflict isn't new & is the basis for many conflicts within campaigns. Another stark contrast is the fact that the 'shining ones' are unique among the patheon of Martian monsters. They appear once & then quietly set into the background. 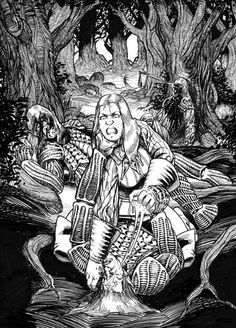 Humanity vs the old races in this case Elves from Lofp

The notations of colonial Mars & colonial based conflicts in Dungeons & Dragons style games isn't racist its adventure & campaign driven. The racial motivated battles are not race driven their driven by resources of a campaign. the hero king  Ban Cruach strove to push back the 'shining ones' so that his own peoples would have the resources of Mars to expand & evolve. The Man with No Tribe and the Warrior Queen of Kushat are the new hero champions. The losers in this conflict are the 'shining ones' & the same goes for the  Melniboné empire vs its human rivals of Pan Tang.  And this is a cycle that repeats over & over again perhaps the real essence of Law vs Chaos even on an alien world. The real losers are those nameless  adventurers caught in the cross fire. 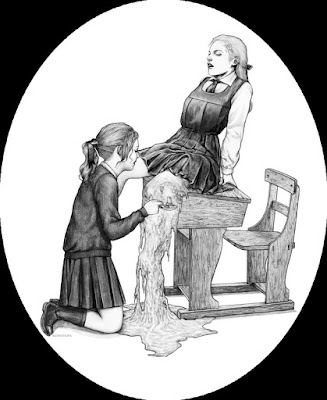 Conflict is good in old school & OSR games, because it allows us as both DM's & players to explore issues from the safety of dice & sanity. Within the bounds of games we see pig faced orcs as servants of the 'other'  & the existence of the shining ones is no different. Their very alien  presence is immical to mankind  & the aliens have an  agenda of taking back Mars regardless of genocide . This contrasts with the Melniboné empire.  Make no mistake the Melniboné empire is utterly evil & decident in its treatment of humanity within the Elric mythos. Yes there are indivdual examples of  Melibonean champions but on the whole. Humanity are late comers to the scene. A fact that the Pan Tangians emulate their former Melibonean benefactors. This irony isn't lost on many readers & players of the  Stormbringer rpg.
And Leigh Brackett isn't a comfortable writer folks & even though the tales are set on Mars they contrast quite nicely with the plots of a great many peoples through out our Earth. Leigh Brackett's Mars seems very much in the same vein as her mentor's C.L.Moore's solar system. A silent frontier that was set out & up in Ray Bradbury's Martian Chronicles waiting for mankind. But mankind is the tresspasser on very ancient legacies. And in many ways the 'shining ones' remind me very much in the same ways that the enemies & ancient sorcerous legacies of the Young Kingdoms. Many of the Elric book's monsters would be right at home among the red & raw sands of Brackett or C.L. Moore's worlds. In many ways many of the conventions of the Sword & Planet vs Sword & Sorcery literature remain. But this is a form & function of the genre & not a take away.
But my question becomes will the amulet & sword of the old warrior king keep the 'shining ones' at bay forever?! Perhaps not.
There are many, many, questions about Leigh Brackett's Mars still in the back of my mind. But that's another blog entry.
Posted by Needles at 8:02 AM