Psi Stalkers are feral mutant warrriors genetically bred by powers unknown before the coming of the Apocalyse. These fearsome mutant  hunters have the same skill sets as fighters in both Cepheus Atom & Barbaric. 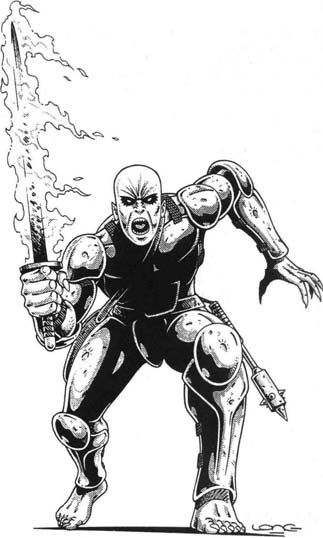 They may throw Lore 7+ to sense any psi or  sorcery activity  that has been used in the general vicinity in the last five hours. Further, they gain Advantage on Lore throws to track a target, but require a way to gain their psi scent. Wild Psi Stalkers have the claws & fangs mutation . These monsterous mutant humanoids will track their prey for days.  Then consume a psionic or wizard in a frenzy of blood lust. Use the stats for bandits for teams of Wild Psi Stalkers from Barbaric or Cepheus Atomic.
The Coalition captures these mutants as pre teens & 'educates' them as bounty hunters & trackers for the state. Many mercenary outfits have psi stalkers as valued members of various teams. These PC's often have their blood lust under control (most of the time).